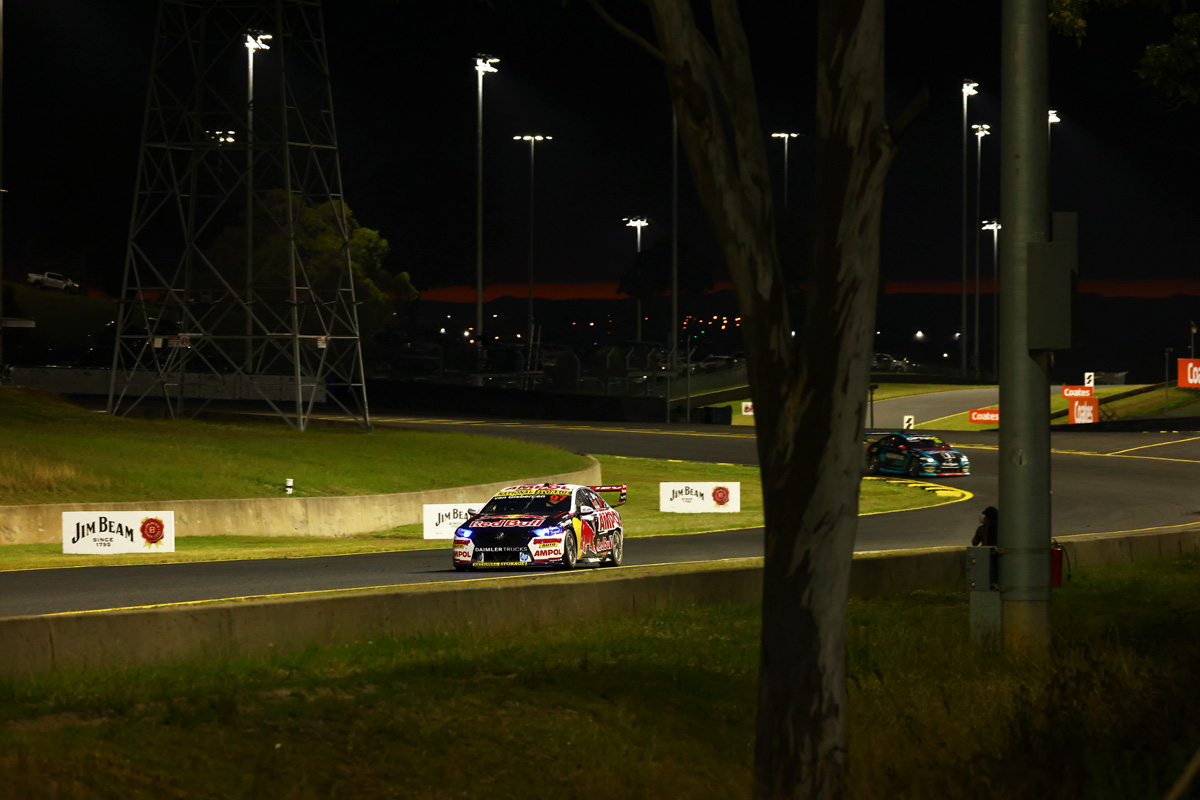 Neither Triple Eight Race Engineering nor Dunlop is overly concerned about a tyre issue encountered by Shane van Gisbergen during Race 20 at the Bunnings Trade Sydney SuperNight.

He had been told to take a conservative approach to the closing stages of the race after damage was discovered on the outgoing right-rear tyre on the #97 Red Bull Ampol Racing entry, although that was precautionary.

“We’ll have to see if it was a blister or a cut or what it was,” Triple Eight team manager Mark Dutton told Speedcafe.com.

“Yesterday and today, throughout pit lane there’s been little cuts on tyres.

“There’s some normal track stuff – there’s always little drop-offs and kerbs and things like that – so it’s part of racing.

“So, you’ve got to understand, is it a set-up thing or is it a car positioning?

“We didn’t think it was a high-risk issue but still, towards the end of the race, we told Shane to conserve, just because we thought he was in a position where he wasn’t close enough to get first and he was also fairly safe from third position.”

Dunlop operations manager Kevin Fitzsimons said the damage would not have caused a catastrophic failure anyway.

“It’s broken the overlay, the cord where they have a jointless band that runs between the top of the carcass and the base of the tread,” he told Speedcafe.com.

“When it over-stretches, it breaks like a tow rope on a car, so it’s that type of scenario, and it can be caused by a multitude of factors.

“The tyre itself still had air in it; it was still performing. It’s just that you notice the damage on it afterwards.

“But it doesn’t cause a catastrophic failure. If it keeps working away at it, it can just split a little bit and everything but it’s not a major concern.

“In general, they were all pretty good, so see what tomorrow brings in the daylight.”

According to Fitzsimons, a kerb or rocks could have been the culprit.

“It could be simple as running over a kerb [or] it could be caused by a sharp stone,” he explained.

“There’s a few sharp stones with guys dropping off the track at a couple of spots; they throw rocks on there and they flick them up, it’s just one of those things.

“As I said, it’s not a major concern, I’m not panicking about it at all, and neither are they.

“We’ll just work through it, have a look, [and] they might be able to see something in the data.

“I haven’t spoken to Shane to see whether he could actually feel it or not, but the performance, it wasn’t affecting it; the pace was the same on both sets [before and] after the pit stop.”

Van Gisbergen, like most, took only fresh working side tyres in his compulsory pit stop in Race 20, leaving another 14 new or only slightly used tyres to get through tomorrow’s two races.

A pair of 10-minute qualifying sessions to set the grids for those contests begins from 10:30 local time/AEDT.