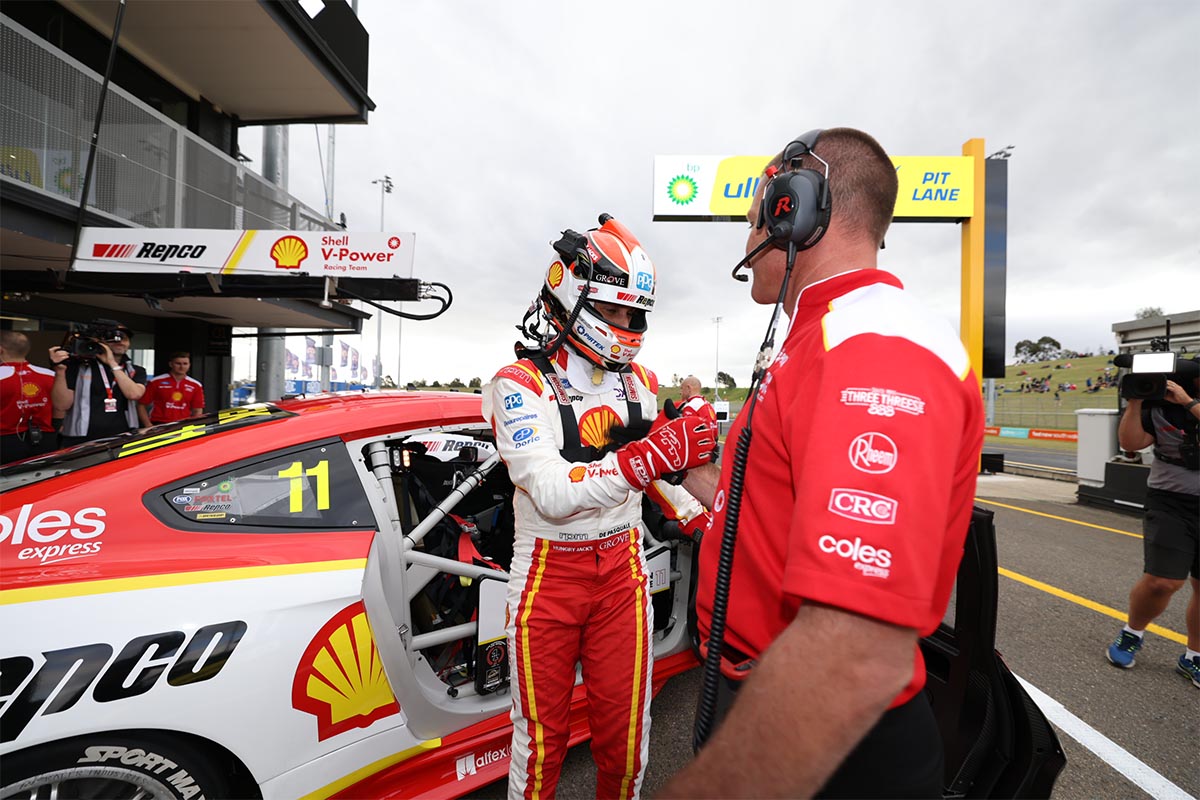 Anton De Pasquale is on pole

Anton De Pasquale has prevailed in an otherwise close Top 10 Shootout for Race 20 of the Repco Supercars Championship at Sydney Motorsport Park by a big margin.

The Shell V-Power Racing Team driver will share the front row with Erebus Motorsport’s Will Brown after going 0.5283s faster than the field in the one-lap dash.

Will Davison made it two Dick Johnson Racing entries in the top three while championship leader Shane van Gisbergen is set to start sixth in tonight’s 32-lapper at the Bunnings Trade Sydney SuperNight.

The cloudy conditions and cool temperatures meant several drivers found time relative to their earlier qualifying efforts, and only 0.1240s covered the top five when De Pasquale was last onto the circuit.

He was immediately on a hot pace, bettering the previous fastest first sector by two tenths of a second and Brown’s second sector benchmark by almost three tenths despite a conservative run exiting Brock’s 05.

De Pasquale also set a marginally faster final sector than anyone else to break the beam in a time of 1:28.0772s, almost half a second up on his pace-setter in the preceding session.

“It’s handy,” said the man in the #11 DJR Mustang who is now unbeaten in four sessions this weekend at SMP.

“It’s always good when you go at the end; the track’s cooling off so you have got the best of both worlds there but the car has been in a good window straight out of the truck.

“That’s probably the best we have rolled out the car all year; we’re just in a window where we can fine-tune it and just find little things at a time which as a driver you get [more] confident and confident.

“So far, so good; it’s a good start. We want to execute in the race tonight and then flow on for another four weeks.”

After the hefty margin from one side of the front row to another, barely more than two tenths separated second-placed Brown from seventh on the grid.

Brown’s team-mate, Brodie Kostecki, had provisionally qualified seventh in the earlier session but laid down a challenging time to beat when he drove the #99 Boost Mobile ZB Commodore to a 1:28.7028s.

Cameron Waters (#6 Monster Energy Mustang) was next man onto the race track and fell just short in setting a 1:28.8113s.

That left just the two DJR cars to come, and Davison came close to knocking off Brown – as well as close to straying over track limits at Turn 05 – but completed the lap in a time of 1:28.6187s.

That means the pointy end of the grid is De Pasquale from Brown, Davison, Percat, Kostecki, van Gisbergen, and Waters in seventh.

Tim Slade (#3 Dayco Mustang) was the only driver on used tyres, having gone through three sets in provisional qualifying, and went on to finally take 10th on the grid with a 1:29.6085s.