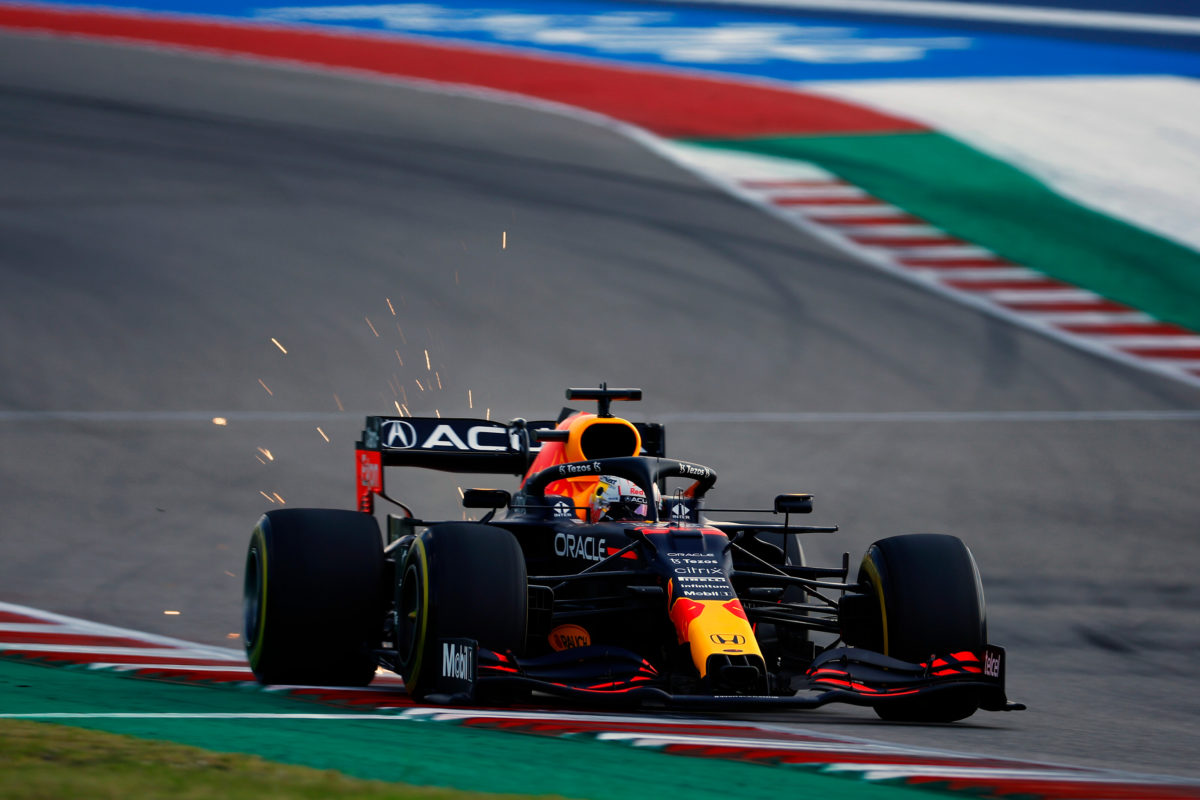 Max Verstappen has won a thrilling Formula 1 United States Grand Prix after seeing off a late charge from Lewis Hamilton.

An aggressive pit strategy from Red Bull set up a grandstand finish, Hamilton enjoying a tyre advantage in the latter stages but unable to make it count.

At the race start, Hamilton and Verstappen battled into Turn 1, the Mercedes driver emerging ahead with Perez slotting into third.

In the pack, Daniel Ricciardo and Carlos Sainz scrapped over fifth before the Spaniard found himself flanked by both McLaren’s down the back straight.

They went three-wide into Turn 12, Lando Norris pushed wide as Sainz miraculously held on, only for Ricciardo to scythe up the inside around the triple-apex Turn 16-17-18.

Hamilton held a 1.1s advantage at the end of the opening lap, the field quickly stretching out after the frenetic start.

Verstappen hung on to his title rival, the duo quickly pulling clear of Perez who in turn was driving away from Charles Leclerc in fourth.

At Ferrari, Sainz was instructed by race control to allow Norris through as a result of their exchange  on the opening lap.

The Spaniard wasn’t impressed, arguing he’d already allowed Ricciardo through, and that race control had misidentified the McLaren driver involved.

After 10 laps, Verstappen pitted for a set of hard tyres, dropping behind Ricciardo in fifth.

Verstappen got by Ricciardo midway around his out lap to move up to fourth with a strong pace advantage over Hamilton out front.

Mercedes did not respond, though a raft of others did, including Perez who was hauled in from second on the road.

A set of scrubbed medium tyres saw him turned around in 3.7s as Red Bull looked to attempt the undercut on the race leader.

However, Hamilton stopped next time through, wise to the risk and duly covering it off to safeguard his position behind Verstappen.

The Dutchman easily claimed the race lead with a more then six second advantage, Perez five seconds further back.

On Lap 14, Pierre Gasly was limping, the Frenchman reporting a problem with the rear suspension on his AlphaTauri.

Having lost a spot to Kimi Raikkonen, who he eased off the track at Turn 1, Fernando Alonso tried his luck with a move on Antonio Giovinazzi at Turn 12.

The Spaniard sent it long, leaving the track to complete the pass for 13th, and was promptly told to give the place back – much to Alpine’s chagrin.

Having done so, Alonso launched another attack as the pair squabbled from Turn 12 to Turn 18, ironically Giovinazzi maintaining the place by leaving the track.

The Sauber driver was told to give the position back, doing so at the first corner as they started the next lap.

Having enjoyed a 6.7s lead after Hamilton’s stop, Verstappen’s advantage had reduced to just 2.7s by Lap 26.

The Virtual Safety Car was deployed on Lap 27 to clear debris and was quickly withdrawn, Verstappen’s advantage growing to 3.3s in that period.

With 26 laps remaining, Red Bull hauled Verstappen into the lane, giving Hamilton the lead as the Dutchman slotted in third.

Having offered his team-mate a handy DRS tow, Perez moved aside for Verstappen, the Mexican pitting for a second time at the end of the lap.

Hamilton had strong pace out front, holding a 17s advantage and turning in similar times as his title rival in second.

With Mercedes looking to extend the Brit’s stint, he was set to ultimately lose track position but enjoy a tyre advantage in the closing stages.

His advantage slowly eroded, Hamilton’s advantage 13.6s after 36 of the 56 laps.

Lap 37 saw the race leader stop, a 2.4s stationary time that saw Verstappen reclaim the lead ahead of a straight fight to the flag.

The pair were split by 8.9s as Hamilton rejoined with 18 laps remaining, easing his fresh hard tyres in as he began to reel in the championship leader.

Traffic proved a problem for the Red Bull driver, his advantage slashed to 6.2s after dropping almost two seconds on Lap 40 alone.

Raikkonen was shown a black and white flag for his part in delaying Verstappen, who also found Yuki Tsunoda more than trivial to lap – the gap to Hamilton reducing to 4.8s.

As that was going on, Ricciardo found himself fending off the advances of Sainz, the pair making contact as they accelerated out of Turn 13 on Lap 43.

On Lap 44, Hamilton clawed back 0.4s as Verstappen set his own personal best, the pair having cleared the backmarkers with clear track ahead.

As the leaders began Lap 50, Hamilton was just 1.9s down on Verstappen with six laps to run, the Mercedes driver lapping 0.2s quicker as the Red Bull recorded its fastest lap of the race.

Next time through the gap dropped by a further 0.4s, stabilising from there as Hamilton hit the turbulent air.

Indeed, the Red Bull driver even managed to extend his advantage in the next two laps, eking it out to 1.9s as they began Lap 53.

As they started the penultimate lap, Hamilton was 1.1s behind, just outside of DRS range as the race built towards its climax.

Verstappen was able to react an edge out to 1.5s, only for that to be decimate when he closed on Mick Schumacher in the final corner.s

It left Hamilton just 0.8s behind at the start of the final lap.

A good exit onto the back straight saw Verstappen maintain his advantage, holding on to win the United States Grand Prix.

Hamilton was just 1.3s behind at the flag, Perez third from Leclerc in a lonely fourth.

Ricciardo maintained fifth over Valtteri Bottas, who passed Sainz in the final laps, with Norris eighth from Tsunoda, and Sebastian Vettel rounding out the Top 10.

Verstappen now holds a 12 point advantage in the championship, Hamilton having picked up a bonus point for fastest lap.

With Perez third and Bottas only sixth, Red Bull has made ground on Mercedes in the constructors’ championship, the gap between them now 23 points, a gain of 13 at the top of the title standings.