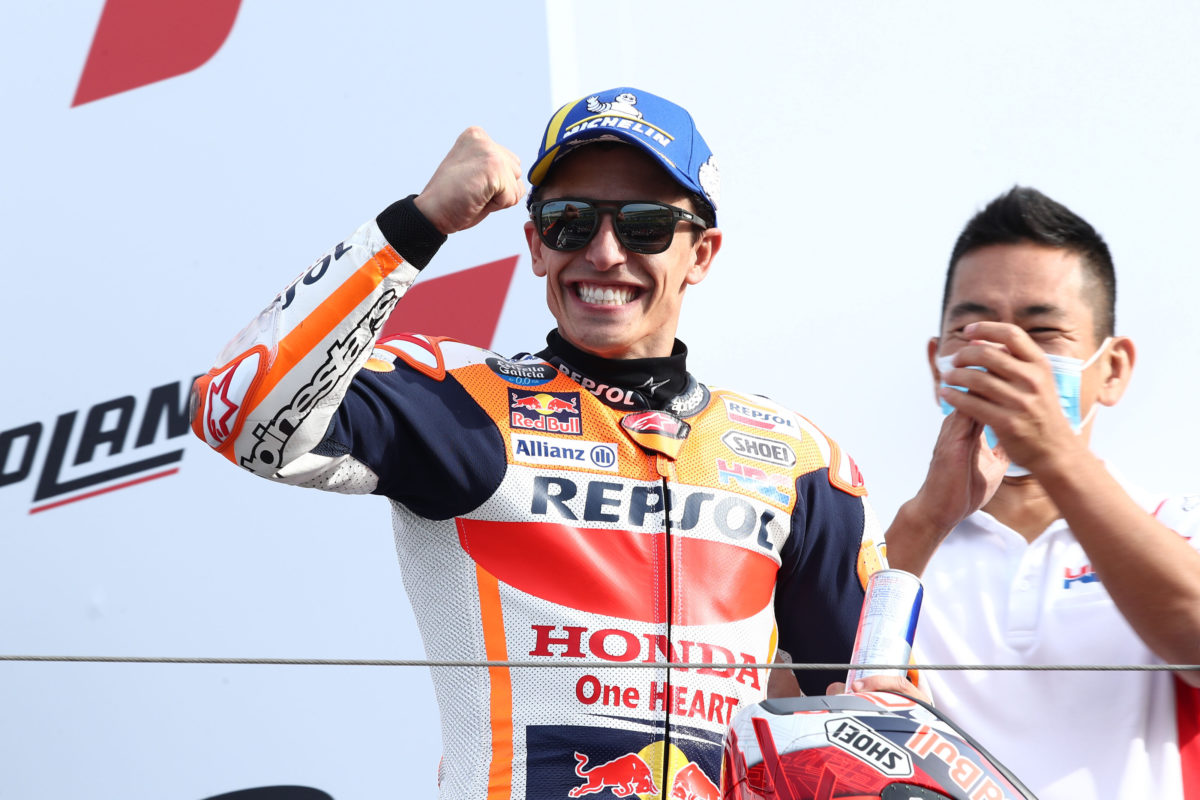 Marc Marquez has deemed his victory in the Emilia Romagna Grand Prix his “most important of the year”.

The Repsol Honda rider is still not fully fit after badly breaking his arm in July 2020 and while he had two prior wins in 2021, they came at the Sachsenring and the Circuit of The Americas.

Both of those circuits are anti-clockwise, which have always been Marquez’s strength, even before he damaged his right-hand side and made clockwise circuits more difficult to handle.

The triumph at the Misano World Circuit Marco Simoncelli is his first on a circuit with mostly right-hand corners since October 2019 at Japan’s Twin Ring Motegi.

It is all the more notable considering Misano also played host to the San Marino Grand Prix just two rounds ago, when Marquez finished fourth.

This time, the Spaniard tailed Ducati’s Francesco Bagnaia for most of the 27-lap contest, until the Italian crashed out of the lead with just over four laps to go.

“For me, it’s the most important of the year, this one,” said Marquez in pit lane, shortly after taking the chequered flag.

“I mean, winning in a right corner circuit… [these are] are the circuits that I struggle a lot this year, and still I’m struggling a bit.

“But it’s the progress, it’s the evolution, and it’s something special.

“It’s something that will give to me a lot of confidence for these next two races, but especially for the winter time, to be more calm, to be passion, and with the time, everything is going in a good way, so this is the most important.

“Today, the pace was unreal in the race. I mean, Pecco [Bagnaia] was riding super-fast.

“When I saw the 32-low, 32-low… I mean, I don’t know how he was able to stay there, but in the lap when I give up because I saw that he was extremely fast on that lap, then he crashed.

“It’s true that I was putting pressure to him, but Pecco was the fastest rider on the track today.”

The six-time premier class title winner also took it upon himself to offer his congratulations to the newest member of the club of MotoGP champions, Fabio Quartararo.

The Frenchman began the day with a 52-point lead over Bagnaia but, having qualified 15th, looking a slim chance of clinching the crown two races early.

In the end, that is exactly what he did, riding to fourth in a race of attrition in which Bagnaia was one of the several who crashed out.

“Apart of that, today is not my day, it’s the day of Fabio,” added Marquez.

“I want to congrats him. He deserve[s it], he did an incredible season, an incredible job, so congrats Fabio, Yamaha team, and we will try to put some difficulties next year to him.”

Marquez is now sixth in the championship, seven points behind Jack Miller, despite missing the first two races of this season also due to injury.

The penultimate round is the Algarve Grand Prix, back at Portimao, on November 5-7.