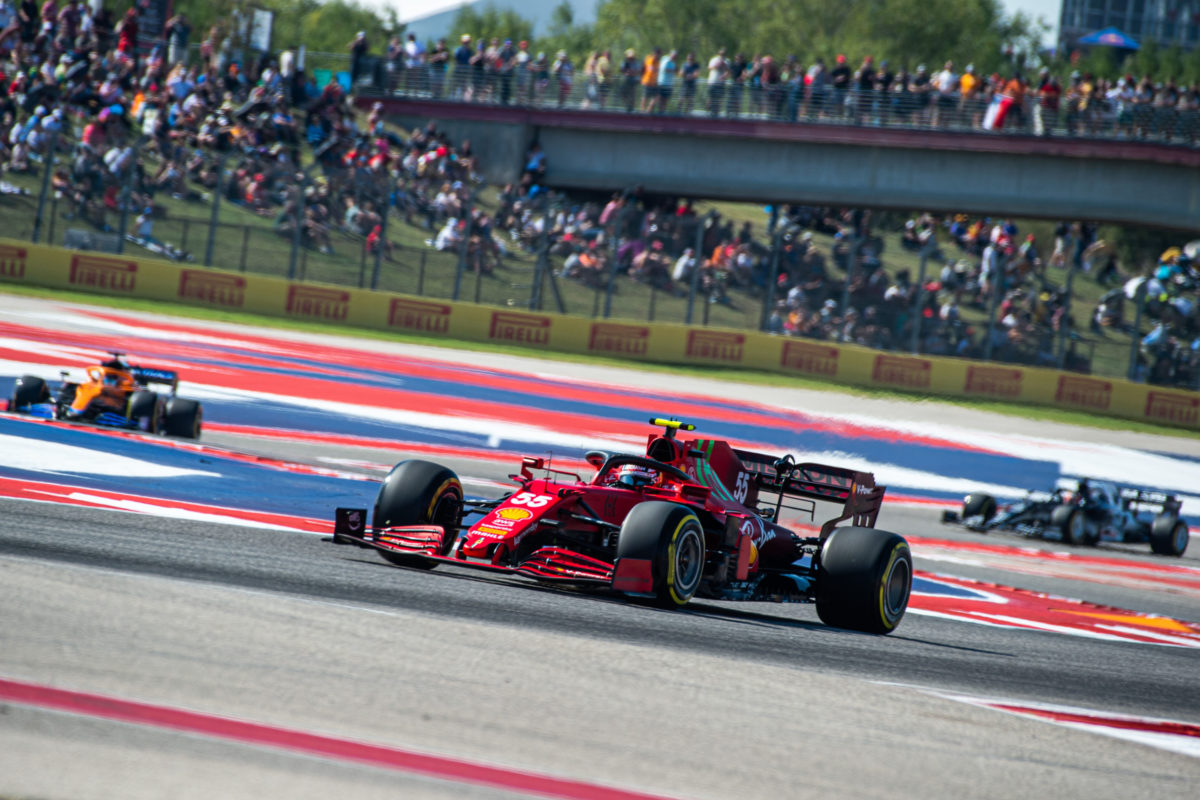 Carlos Sainz was “clever” to cede position to Lando Norris and immediately reclaim the place during the Formula 1 United States Grand Prix.

That’s the assessment of McLaren’s Andreas Seidl after the Sainz driver found himself swamped by both McLarens on the opening lap at the Circuit of The Americas.

Norris and Daniel Ricciardo attacked down the back straight and into Turn 12.

It was during the latter moments of the exchange that Sainz was deemed to have driven Norris off the road and was soon after instructed to give the place back to the Brit.

However, the Spaniard argued claiming he’d already allowed Daniel Ricciardo through, and that race control had a case of mistaken identity.

Though not seen on the broadcast, Sainz eventually allowed his former McLaren team-mate through, but in a way that allowed him to quickly regain the upper hand.

“From our point of view, it was clear that Carlos only got Lando back because he went off the track,” Seidl said of the opening lap exchange.

“So that’s why we clearly expected that he had to give the position back, which he had to do later on.

“Unfortunately, he did it in a clever way so that he could actually overtake Lando back straightaway on the next straight, so we couldn’t benefit from that.”

Though branding Sainz’s move clever, Seidl stopped short of suggesting any wrongdoing from the Ferrari pilot.

“Obviously not the idea of giving the position back but let’s see,” the German said when asked if he would like the stewards to have stepped in once again.

“We need to analyse again in detail, speak with Lando, see what he thinks about it.

“I would say as long as the rules are like they are, I have to say hat off to Carlos, he did it in the correct way.

“I think it was the correct thing that he had to give the position back because of what happened in lap one,” he added.

“But hat off to what he did, it’s allowed to do it like that in the regulations.”

Having lost out to Sainz in the early exchange, and again when the Spaniard ceded and promptly reclaimed the place, Norris’ race was all but over.

“With Lando not making up any positions in these first laps I think his race was pretty much done,” Seidl assessed.

“He commented that he struggled quite a lot with the conditions and with the management of the tyres.

“Then, with also being behind, you struggle even more and I think in the end there wasn’t more in for us today.”

Norris meanwhile was more critical of his performance, suggesting there were aspects he could have improved on.

“There were some areas I could’ve done better, including defending on some moves,” he said.

“The start was pretty exciting but we just weren’t able to stay ahead of the Ferraris in front.

“Not a great day today, but we’ll pick ourselves up and look forward to Mexico.

“I just want to get back in the car already and keep working hard to make some progress in our championship battle.”

McLaren holds a 3.5-point advantage over Ferrari in the constructors’ championship after the Scuderia out-scored the British squad by four points in Austin.

Five rounds now remain in 2021, the next of which is the Mexico City Grand Prix on November 5-7.