Remy Gardner concedes he cannot afford more rounds like the Emilia Romagna Grand Prix, when he would have lost the Moto2 championship lead had team-mate Raul Fernandez not crashed.

Gardner had qualified 14th and was only eighth when issued a long lap penalty with 11 laps to go at Misano for contact with Somkiat Chantra.

That made matters even worse after Raul Fernandez had already climbed from a subpar ninth position start of his own to lead the third-last race of the season.

However, almost as soon as the penalty call came through for one Red Bull KTM Ajo rider, the other one went down in spectacular fashion at Turn 8.

Gardner went on to finish seventh and thus, instead of leaving Italy’s Adriatic Coast eight points behind an in-form team-mate, his lead atop the standings in fact doubled from nine points at the start of the day to 18.

“It has been a weekend with many ups and downs,” he said.

“In the end, we were lucky and we have taken some important points. However, we cannot afford to have more rounds like this if we want to fight for the championship.

“We decided on our tyre following the choice made by the rest of the grid, but unfortunately it didn’t work out so well for us and I was left behind in the group.

“In addition, we had an incident with another rider and we had to serve a long lap penalty. I’m sorry about what happened.

“From there I tried to fight back as fast as I could, and finally we finished seventh.”

Fernandez had gone down on his front brake and could not explain what had happened. 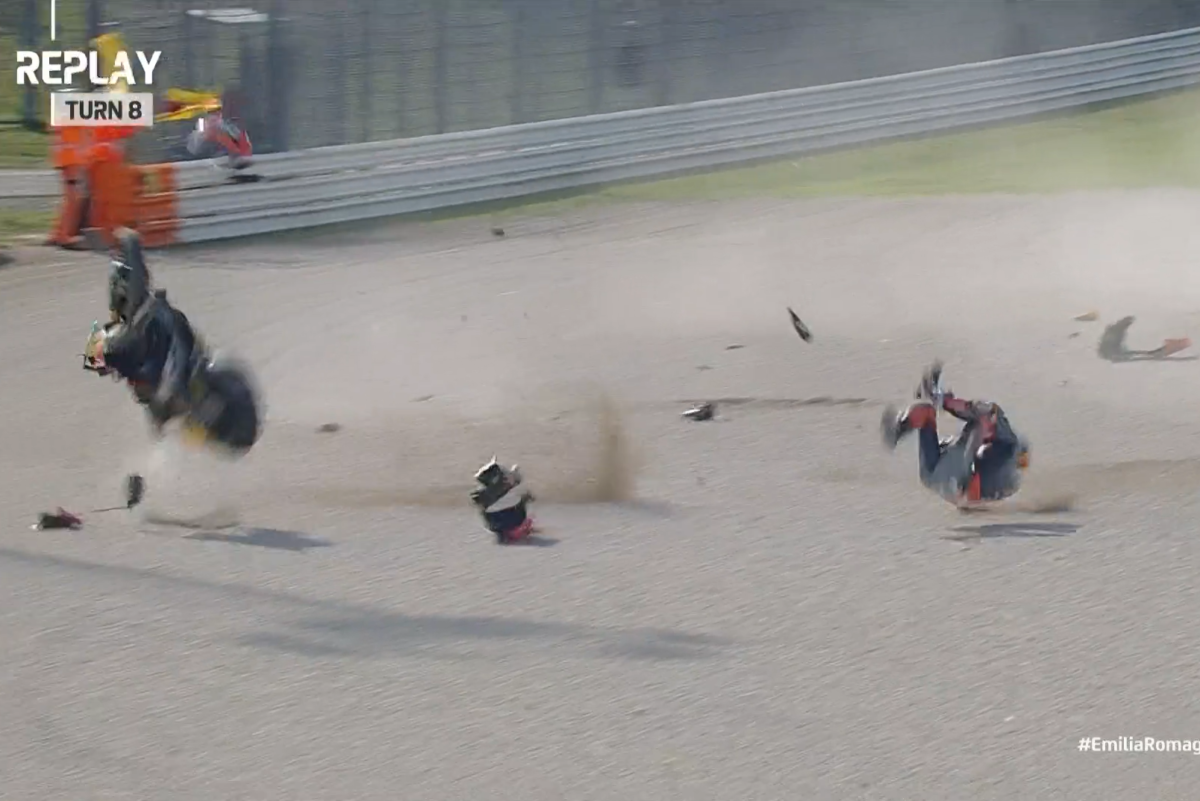 “I want to apologise to the team for the crash,” said the Spanish rookie.

“I wanted to win the race and I was not thinking about the championship. It was a strange incident, as I was very calm on the bike and I did not make any strange movements.

“I can’t quite understand what might have happened, so we will analyse it and make a note of it for the next round.

“Luckily, we still have two more chances to fight for good results before the end of the season.”

Team manager Aki Ajo remarked, “It was a tough weekend, especially due to the weather conditions.

“In qualifying we had issues with front tyre temperature, like other teams surely did as well. Because of this, our starting positions in today’s race were not very good.

“In any case, Raul had a great start and reached the front with the chance to fight for the win.

“We are disappointed with what happened. Nevertheless, he has shown great progress throughout the season and this kind of misfortune can happen.

“He has to forget about this round and focus on the next two rounds, to finish the year in the best possible way.

“Remy had a difficult Sunday, beginning from so far back. In addition, he was given a long lap penalty in the contest, which didn’t help him.

“All in all, he managed to score some important points and now he has to focus on the remainder of the campaign.”

With VR46’s Marco Bezzecchi crashing late on, an incident which handed seventh position back to Gardner, it is now certain that KTM Ajo will finish one-two in the championship.

It has now also wrapped up the Moto3 teams’ championship, but the chase for the lightweight class riders’ title is tightening up.

Leopard Racing’s Dennis Foggia rode from 14th on the grid to win at Misano, closing to 21 points off the top of the standings after KTM Ajo’s Pedro Acosta finished third.

The penultimate round of 2021 is the Algarve Grand Prix, at Portimao, on November 5-7.