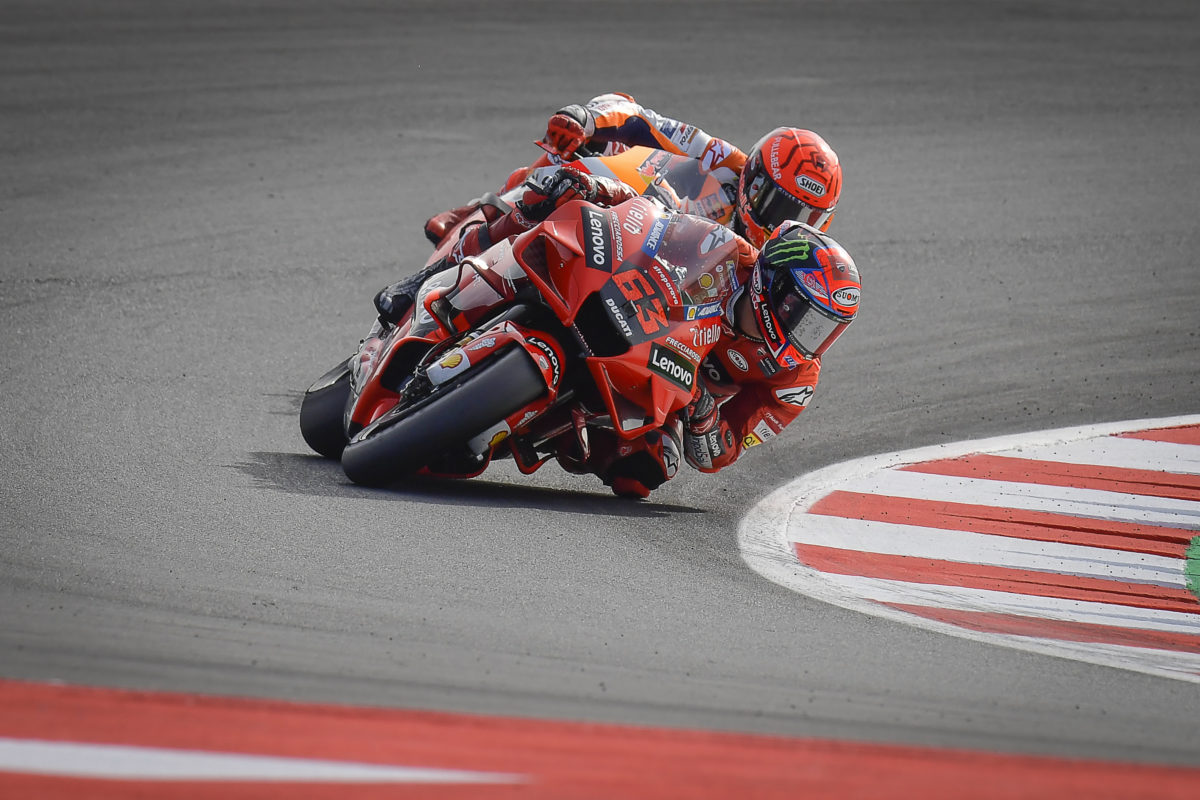 Francesco Bagnaia says he took a “win or gravel” approach to the Emilia Romagna MotoGP in which his championship hopes were extinguished.

The Italian led from the first corner of the race until the second-last corner of Lap 23 at Misano, at which time he folded the front of his Ducati and thus confirmed Yamaha’s Fabio Quartararo as champion.

Bagnaia’s team-mate Jack Miller had done likewise while running just behind him in second position on Lap 4, with both having opted for Michelin’s hard front tyre but everyone else for the medium.

Miller said they had made their choices independently, and thought it was a “masterstroke” until the race went horribly wrong.

Bagnaia had a similar view, but was left with the task of pushing hard to maintain tyre temperature in the cold Misano weather.

“This for sure was not that because I lost concentration,” he said of the crash.

“I was pushing, today was either winning or gravel, and I tried all to achieve this win and I crashed.

“The tyre choice was, I think, good because this was the only one that was helping me on the braking and the medium for me was worse than the soft.

“Soft was already on the limit yesterday and this morning, so the hard was the correct choice.

“The only thing was that you just needed to push every single lap like hell, to get the tyre hot, so this lap maybe I braked a little early in Turn 8 and, nothing.

“What I just want to say is that we’re working a lot. It was difficult this weekend. The pace was stronger than five weeks ago [the San Marino Grand Prix at Misano, which Bagnaia won].

“So, we have to be happy about this. But for sure we are frustrated in this moment.

“But, it’s something that we have to be happy with because today we demonstrated that we were on top again.”

Bagnaia had, for some time this season, seemed the only rider who could possibly run down Quartararo’s championship lead.

The 2018 Moto2 champion congratulated the Frenchman post-race and declared him a deserving title winner.

“I’m happy about my performance of today,” remarked Bagnaia.

“For sure, I’m a bit frustrated about the result because I think that we were deserving more but we just try to be always more competitive and for the next year we are for sure in a good way.

“And I told just to Fabio [post-race] that he deserved this title.

“For sure, he was the one that was more deserving of this title, so I’m happy for him.

“Last year, he was in my situation because was the first time he was winning like this and he committed errors in the last part of the season.

“I’m in this situation now this year and for the next year I think we will come back more prepared.”

Bagnaia remains second in the championship, still 27 points ahead of Joan Mir.

The second-last round of the season is the Algarve Grand Prix, at Portimao, on November 5-7.