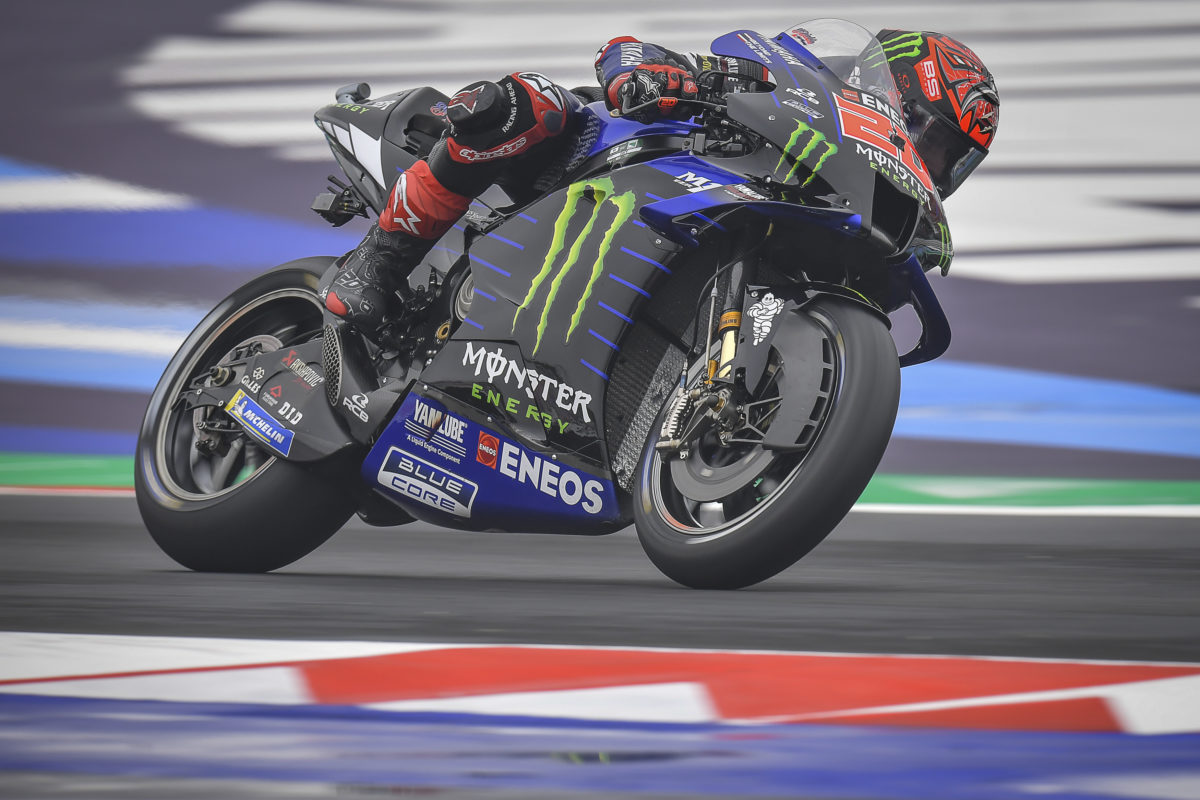 Fabio Quartararo has wrapped up his first MotoGP championship title after Francesco Bagnaia crashed out of a late lead, handing victory in the Emilia Romagna Grand Prix to Marc Marquez.

Quartararo came from a career-worst 15th on the grid on his Monster Energy Yamaha to finish fourth in a race of attrition at Misano which saw not only Bagnaia but also Jack Miller on the other Ducati Lenovo Team entry crash out.

Those were also the only two riders who opted for the hard front Michelin tyre and both of their spills were front-end wash-outs at Turn 15.

Whether that was an error on the team’s part or not, the end result was that Marquez rode to a second straight victory and the third of his comeback season, with Pol Espargaro making it a Repsol Honda one-two after 27 laps of racing.

Avintia Esponsorama’s Enea Bastianini pinched third position from Quartararo on the final lap but that was largely inconsequential given the Frenchman’s points lead cannot be overhauled in the two races which remain in 2021.

The afternoon began with it highly likely that Bagnaia would hack into Quartararo’s 52-point margin and take the title fight at least to Portimao in a fortnight from now.

Miller got a smart launch from the middle of the front row but filed behind Bagnaia and Red Bull KTM’s Miguel Oliveira under brakes at the first corner.

However, Miller quickly got back ahead of Oliveira and then Marquez went down the inside of the Portuguese rider at Turn 8.

Quartararo was 14th at the end of Lap 1 having dropped as low as 17th, before passing Johann Zarco (Pramac Ducati) early on Lap 2.

Pol Espargaro went down the inside of Oliveira for fourth on Lap 2 at Turn 10, as the three riders ahead of him began to pull away from the field.

It appeared as though Miller was happy to sit behind Bagnaia, and perhaps even try and protect the Italian from Marquez, but that came to an end on Lap 4 when the Queenslander lost the front at Turn 15.

The latter was into the top 10 when he passed Iker Lecuona (Tech3 KTM) on Lap 6, as Bagnaia and Marquez pushed towards a three-second margin over third-placed Pol Espargaro.

Aleix Espargaro (Gresini Aprilia) overtook Morbidelli for fifth and when Alex Rins (Suzuki Ecstar) came for the Italian on Lap 15 at Turn 2, he made room for Luca Marini (Sky VR46 Esponsorama Ducati) to follow.

That left Morbidelli eighth and Quartararo was by then ninth, leading to the inevitable when the former let his team-mate also go through.

Try as he might, Bagnaia could still not shake Marquez, although both continued to gap Pol Espargaro on the other factory-entered RC213V.

Quartararo continued to make progress, helping himself to seventh position when Marini made an error at Turn 8 on Lap 15, and then going by Rins to move up to sixth on Lap 18 at Turn 4.

When Aleix Espargaro ran wide at Turn 10 on Lap 19, the championship leader rode through the big gap and into fifth position, at which time Oliveira was several seconds up the road.

Bagnaia started to put the hammer down on Lap 22, stretching his margin over Marquez to almost seven tenths of a second.

He was around 0.9s up when the front of the #63 Desmosedici folded at Turn 15 on Lap 23, bringing an end to the Italian’s championship hopes.

Not only that, Quartararo was somehow up to third, with Oliveira having suffered a crash of his own around the same time that was not picked up by cameras.

‘El Diablo’ might have by then climbed 12 spots relative to where he started, but amid all of the drama, Bastianini had done likewise given he was up to fourth on his Ducati from 16th on the grid.

The rookie harried the champion-elect on the final tour of the Misano World Circuit Marco Simoncelli, making a dive at Turn 14 and successfully prising away the final podium position.

In the end, it was Marc Marquez winning by a margin of 4.859s over Pol Espargaro, with Bastianini a further seven seconds back in third and Quartararo fourth.

Zarco qualified 10th and had run around that position for much of the race but took the chequered flag in fifth, ahead of Rins, Aleix Espargaro, Maverick Viñales (Gresini Aprilia), and front row starter Luca Marini (Sky VR46 Esponsorama Ducati).

Fittingly, Valentino Rossi (Petronas SRT Yamaha) finished 10th in what is set to be his final race on Italian soil, by passing Brad Binder (Red Bull KTM) on the final lap.

Binder thus ended up 11th in a grand prix which he started from the rear of the grid after crashing on his way there from the pits before the action had even got underway.

Those 15 were the only finishers from the 23 who started the race and 24 entered for the event.

Alex Marquez (Castrol LCR Honda) was also a DNF, although due to a technical problem, while Gresini Aprilia wildcard Lorenzo Savadori broke a collarbone in a practice crash and took no further part in the weekend.

The penultimate round of the season is the Algarve Grand Prix, at Portimao, on November 5-7.