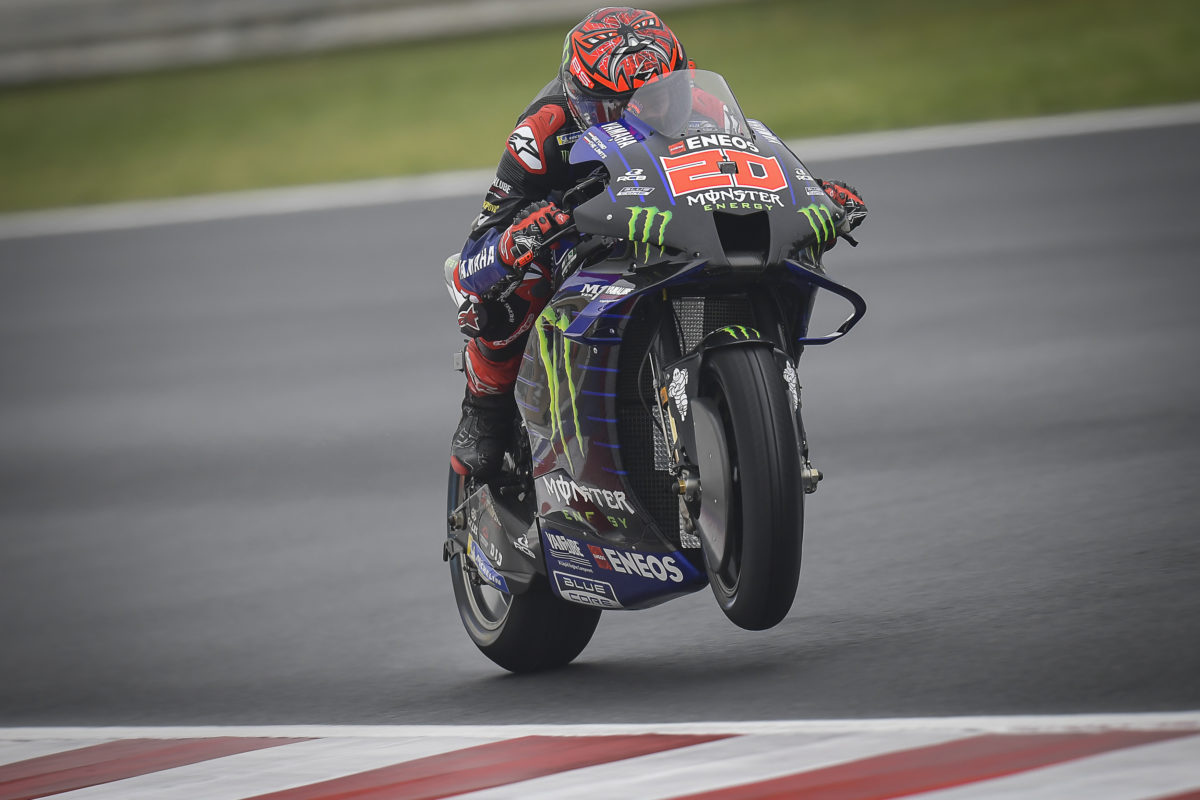 Fabio Quartararo does not want his team to tell him where title rival Francesco Bagnaia is in the Emilia Romagna Grand Prix after qualifying only 15th.

The Monster Energy Yamaha rider holds a 52-point championship lead with three races to go and thus seals the deal if he gives up no more than two points to Bagnaia in today’s 27-lapper at Misano.

However, he starts 15th while Ducati pilot is on pole, despite both going into Qualifying 1.

Despite the juicy opportunity for Bagnaia to make big ground in the standings, Quartararo does not want to be updated on where #63 is running during the race.

“It’s something that will just put more pressure, I think,” he explained.

“My strategy is to push from the beginning. I need to recover the most points as possible, and then we will see what happens.

“I think that our potential in the full dry is good, we will see with which tyre, but I think that it can be a great race.

“Different for sure, because it’s the first time that I’m out of the top 12 in qualifying, so we will see.”

The second round of the year at Misano is the first ‘match point’ for Quartararo, but he expects he will need at least two to get the job done in the championship.

“Of course, for me it’s a tough situation,” admitted the Frenchman.

“To be honest, I have not thought about the championship, because he is P1 and I’m P13 or P15.

“But my feeling is that if everything is normal, we will fight [for the championship again] in Portimao [following round].”

The third-year MotoGP rider’s 15th on the grid represents the worst qualifying result of his career to date.

It was 13th until he had a lap scrubbed for being set with a yellow flag out, then reinstated, and finally deleted again.

Weather has been changeable all weekend at Misano and Quartararo could not help himself but be cautious given there were still wet patches around when he went out for qualifying.

“In FP3, I tried everything to be in Q2 straight away, and we finished not so far away, so we made a massive improvement in the full wet,” he recalled.

“But this afternoon was dry conditions with wet patches on slicks; exactly what I hate.

“I didn’t take enough risk in the last two sectors. It’s something that I can understand, even if it is on an unconscious side of my thinking.

“If you look at my Sector 1, I’m the second-fastest of Q2, even if I was not there [ie Would have been second-fastest]. The only sectors where I lose a lot were the last two, where the wet patches were.

“So I’m not so worried about tomorrow [for which the forecast is dry]. Of course, it’s not the best position, I need to make a great start, try to make great overtakes, and we will see what will happen in the race.”

Bagnaia will be joined on the front row by Ducati Lenovo Team team-mate Jack Miller and Avintia Esponsorama Racing’s Luca Marini, on another Desmosedici.