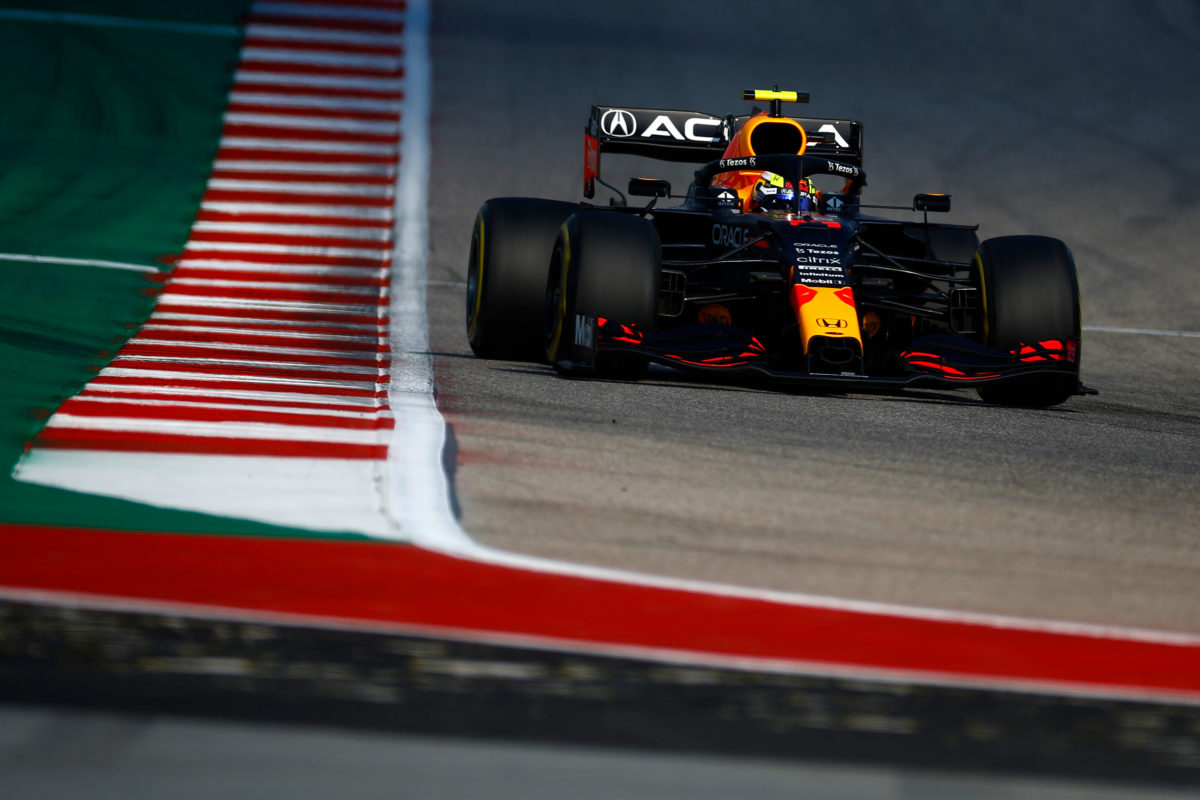 For the second time this weekend, Sergio Perez has topped a practice session ahead of the Formula 1 United States Grand Prix.

He headed Carlos Sainz and Max Verstappen in Free Practice 3, while the Mercedes pairing were only fifth and sixth.

However, the effective order was somewhat different as track limits saw a host of laps scrubbed, including times for both title contenders.

Sebastian Vettel was the only man to head out when the session got underway, the Aston Martin driver completing an installation lap before circling back to the pits where he was pushed back into the garage.

The opening 10 minutes were comparatively quiet before track action increased.

Hamilton was the early pace-setter, his 1:35.814s a comfortable 1.7s clear of Antonio Giovinazzi who was second best.

A flurry of times soon followed; Valtteri Bottas going fastest only to lose his 1:35.556s for exceeding track limits at the penultimate corner.

Red Bull picked up from where it left off on Friday afternoon, with both Verstappen and Perez shooting to the top of the timesheets with near identical times.

Soon after, Bottas had a spin in the esses, flat spotting a set of tyres in the process.

The Finn languished just 19th at the time, his only timed lap having been deleted to leave him without a representative time.

George Russell had a similar highspeed spin at Turn 5, the Williams driver coming to rest shy of the barriers and able to make it back to the pits without further incident.

The bulk of running in the opening half of the session was completed on soft tyres, Vettel and Kimi Raikkonen the busiest with 10 laps apiece in the first 30 minutes.

Meanwhile at Red Bull mechanics swapped the rear wing on Verstappen’s car after a hairline crack was found.

Lando Norris rose to third for McLaren, the Brit logging a 1:34.945s in what had been a comparatively quiet session for the team.

It was Norris’ ninth lap while team-mate Daniel Ricciardo had only 6 to his name with 15 minutes remaining.

Both sat inside the Top 10, Ricciardo having been the quicker of the two for the most part.

Perez went fastest with a 1:34.701s as he completed another qualifying simulation, easing out to 0.104s over second fastest Sainz.

Soon after, Verstappen had a 1:34.383s deleted when he exceeded track limits at Turn 19 – a time which would have left him comfortably fastest.

It was then Hamilton’s turn to light up the timing screen, logging a 1:34.458s only for that too to be deleted for track limits at Turn 9.

The Mercedes driver improved to a 1:35.219s by session’s end, a time which left him sixth fastest and 0.5s down on Perez.

At the foot of the standings was Nikita Mazepin, who clocked up 15 laps with a best of 2:03.456s, an unrepresentative time at 28.7s off the pace.

Qualifying follows, the session getting underway at 08:00 AEDT.