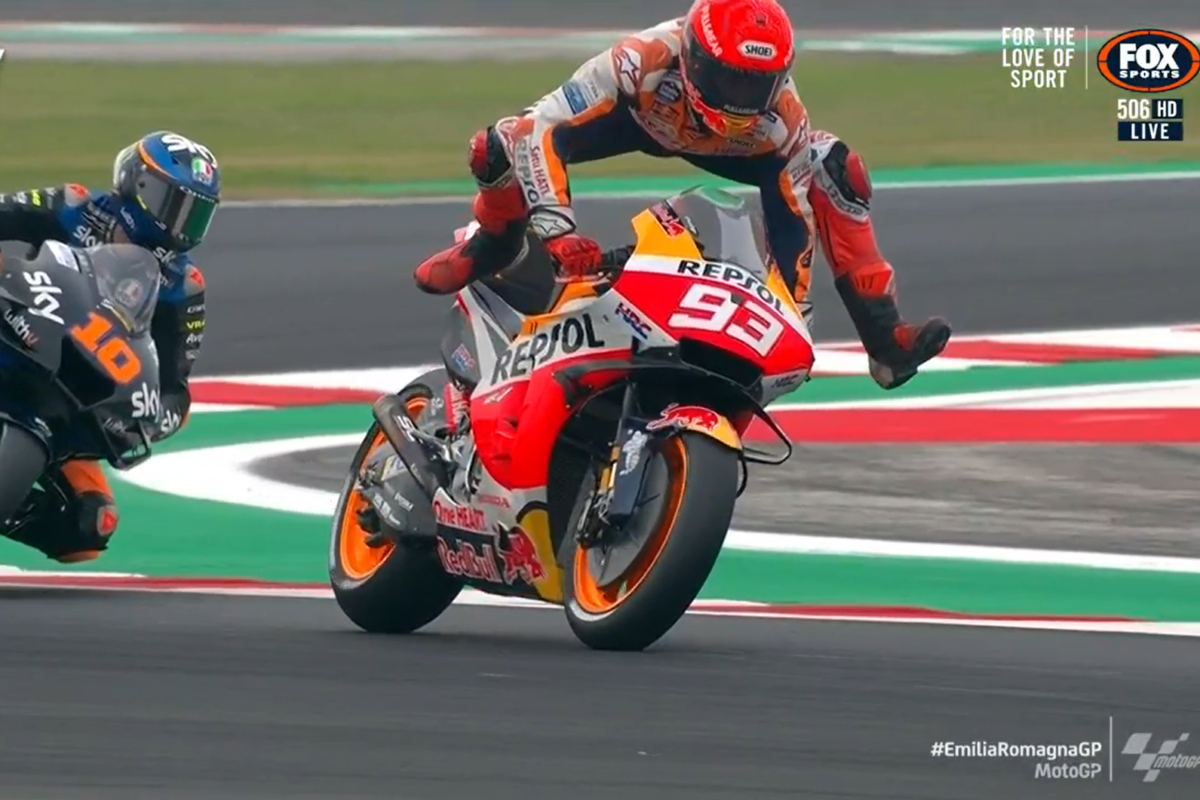 Marc Marquez says he lost confidence after a “lucky” save early in Qualifying 2 at the Emilia Romagna MotoGP round.

The six-time champion nearly went over the handlebars of his Repsol Honda just minutes into the session at Misano’s second corner.

He would go on to qualify seventh and while the near-crash caused shoulder pain, that was not the reason for missing the first two rows.

“A big moment, a big save,” recounted Marquez.

“Then it’s true that there was a big pain in the shoulder for the next 30 seconds but for the rest of qualifying it was not a real limitation.

“It was more the feeling with the bike.

“After all those moments, I lost a lot the confidence and then I was not riding well.

“Even like this I did an acceptable lap time and then I said, ‘OK, wait until the last lap,’ because the feeling was not good.”

Marquez was still on for a Row 2 start when he did end up crashing in the final minute of the session, at Turn 6.

“When you don’t have feeling and it’s necessary to push for a lap time, something like this can happen,” he explained.

“You push without feeling and I lost the front.”

Mere mortals don’t save moments like this! 🤯@marcmarquez93 is no ordinary rider though!!! 💪#EmiliaRomagnaGP 🏁 pic.twitter.com/DxHaUU9yqN

The Spaniard noted that it is also a symptom of a common problem, namely lack of rear grip.

That was exacerbated by the cold weather, which saw most get through Qualifying 1 and Q2 with just a single run.

Having finished fourth when MotoGP also raced at Misano five weeks ago, Marquez believes a podium is out of reach, but hopes for a top five.

“It’s one of the problems we have this year,” said Marquez.

“If you check a bit on the races with high temperatures, we are able to ride well because we are struggling to get temperature on the tyres, especially the rear tyres.

“For that reason, in most of the races we go with the soft option because we are not putting temperature on the tyres.

“Basically, today I suffered a lot with this part, to get the correct temperature.

“It’s still an acceptable result, but today we were able to start minimum on the second row.

“But it’s like this and the most important for tomorrow is get again the confidence with the bike.

“Even if we get again the confidence, we are not ready to fight for the victory, or even the podium,” declared #93.

“But, to finish in the top five would be a good race.”