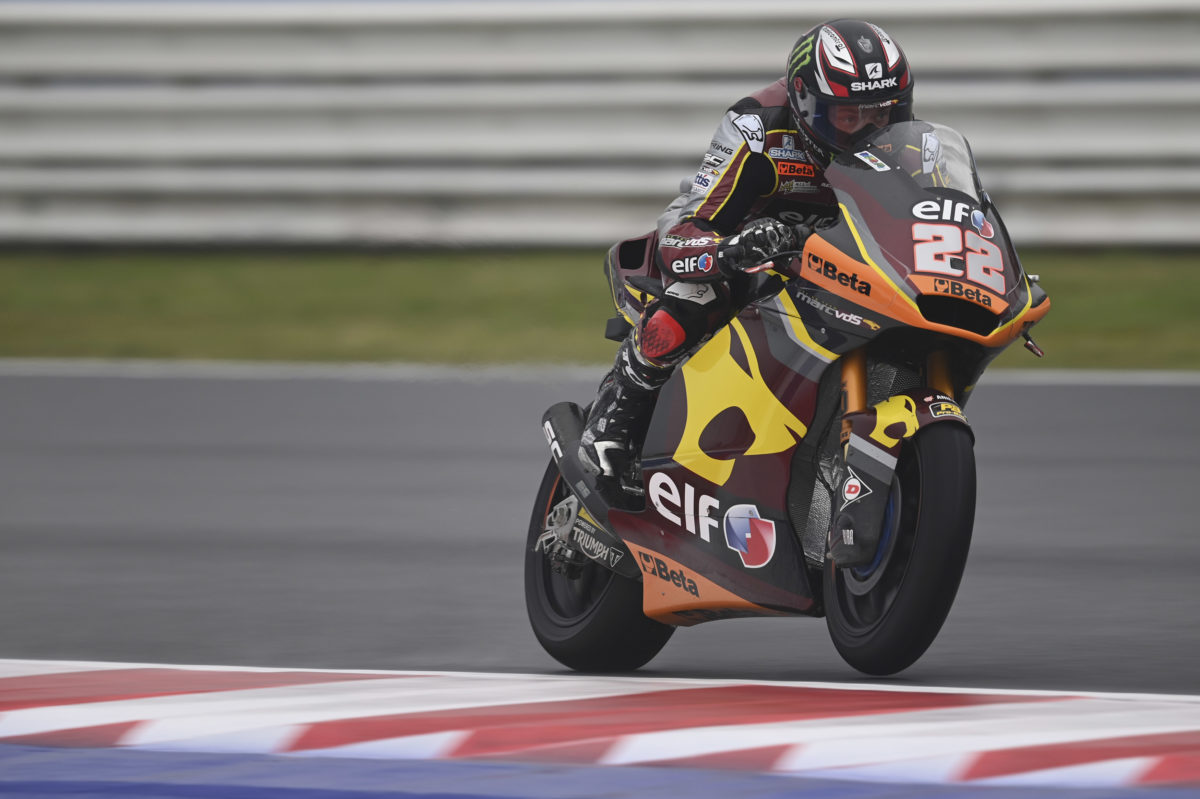 Sam Lowes has won the Emilia Romagna Moto2 Grand Prix after Raul Fernandez crashed when he looked like taking the championship lead off Remy Gardner with another victory.

Red Bull KTM Ajo’s Gardner had qualified a lowly 14th and looked certain to lose first position in the standings when he was issued a long lap penalty while running seventh on Lap 15 of 25 at Misano.

However, almost as soon as that call came through, team-mate Raul Fernandez took a spectacular tumble out of the race lead at Turn 8.

Lowes inherited first position as a result of the spill and while he had to fight off Aspar’s Aron Canet, the Elf Marc VDS rider would go on to claim the victory.

Gardner finished seventh and in fact extended his points lead over Raul Fernandez to 18, with just 50 left to collect across the final two rounds of 2021.

Canet passed Lowes for first position when they reached Turn 8 for the first time, while Raul Fernandez had quickly moved from ninth on the grid to seventh, and Gardner also made up two spots on the opening lap to be running in 12th.

Raul Fernandez passed Ramirez at Turn 8 on Lap 2 before he, Gardner, and others inherited a position when Augusto Fernandez took a long lap penalty for impeding in qualifying.

Raul Fernandez moved into fourth when Somkiat Chanta (Idemitsu Honda Team Asia) nearly crashed through Turn 15 on Lap 2, before Navarro went down the inside of Lowes to take up second position on Lap 3 at Turn 8.

Navarro was in front of everyone when he overtook Canet exactly a lap later, but when Canet tried to fight back at Turn 14, he took both wide and it was Lowes who moved back into the race lead.

Raul Fernandez was also a beneficiary, nicking third as Navarro tried to regroup, and thus tying things up in terms of the live championship points table given Gardner was only up to ninth by that point.

Gardner passed Ramirez for eighth on Lap 5 at Turn 3 but Raul Fernandez was the outright championship leader, as live, when he went by Canet for second on Lap 6 at Turn 8.

There was a flashpoint on Lap 7 when Gardner dived down the inside of Chantra at Turn 14, making contact which put the Thai rider onto the deck.

The Australian was back down to eighth when he ran wide at Turn 8 on Lap 11 and a recovering Augusto Fernandez rode on by, while Raul Fernandez was becoming a nuisance for Lowes at the head of the field.

The rookie got a run on Lowes on Lap 14 and scythed past as they approached Turn 8, extending his live championship lead.

Gardner was then handed a long lap penalty for the contact with Chantra but, seconds after the call came through, Raul Fernandez had a big crash as he braked for Turn 8 on Lap 15.

Gardner took the long lap next time around and retained seventh position, although he would be passed by Marco Bezzecchi (Sky VR46) less than three laps later at Turn 1.

Meanwhile, Lowes had inherited the lead due to Raul Fernandez’s crash, with Canet second and Navarro third.

Canet took over first position when Lowes ran wide at Turn 8 on Lap 18, but the Briton jammed Bike #22 back past #44 on Lap 22 at Turn 2 despite a sizeable front end wobble.

Meanwhile, Navarro made an apparent error, unseen on by cameras, and had dropped back to fifth, behind Celestino Vietti (Sky VR46) and Augusto Fernandez.

The latter moved into the podium positions when he went down the inside of Vietti on Lap 21 at Turn 8, a remarkable fightback given the early long lap.

Lowes took the chequered flag just over a second up the road, as Augusto Fernandez grabbed an even more remarkable second position when he passed Canet exiting the last corner of the race.

Gardner was gifted another precious point when Bezzecchi crashed out of seventh at Turn 15 with just over two laps to go, with the top 10 rounded out by Fabio Di Giannantonio (Federal Oil Gresini), Ai Ogura (Idemitsu Honda Team Asia), and Ramirez.

The penultimate round of the season is the Algarve Grand Prix, at Portimao, on November 5-7.