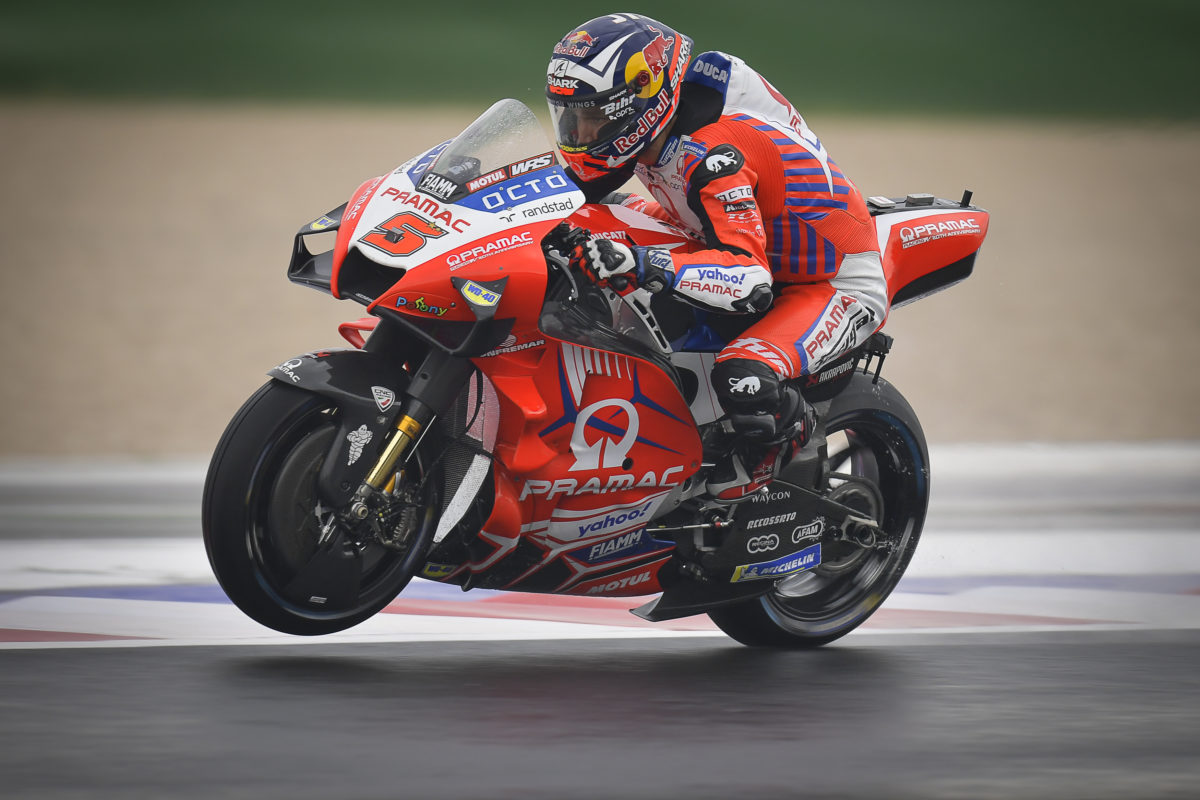 Johann Zarco is fastest after the first three practice sessions at the Emilia Romagna Grand Prix while championship contenders Fabio Quartararo and Francesco Bagnaia are both going into Qualifying 1.

Despite rain continuing to fall at the Misano World Circuit Marco Simoncelli, the lap times also came down in the 45-minute session which finalised the starting order for qualifying for the third-last race of the MotoGP season.

Suzuki Ecstar’s Joan Mir was first to knock off Jack Miller’s Friday benchmark by clocking a 1:41.295s in the 16th minute, but the Australian quickly reclaimed top spot on combined times with a 1:41.203s.

Pramac Racing’s Jorge Martin rode his Ducati to a 1:40.471s just inside the half-hour mark, before team-mate Zarco set what would be the very fastest lap, a 1:40.384s, with just over five minutes to go.

It ended up being an all-Ducati top three with Martin remaining second thereafter and Miller subsequently improving to a 1:40.520s.

Bagnaia was shuffled back to 12th with the chequered flag out, at which point he could only regain one spot when he broke the beam at a 1:41.121s.

Quartararo was outside the combined top 10 for most of the session, before getting up to 10th with a 1:41.171s with just over five minutes remaining.

Moments later, however, the Monster Energy Yamaha rider was bumped out by Tech3 KTM’s Danilo Petrucci.

Quartararo had an off at Turn 9/Turn 10 in the 43rd minute before lifting himself up two spots in the final minutes with a 1:41.275s, but only to 11th position.

He had another moment through Turn 8 with the chequered flag out and that was that, the Frenchman having to go into Q1 for the first time in 2021.

Behind the all-Desmosedici top three was Oliveira from Repsol Honda duo Marc Marquez and Pol Espargaro.