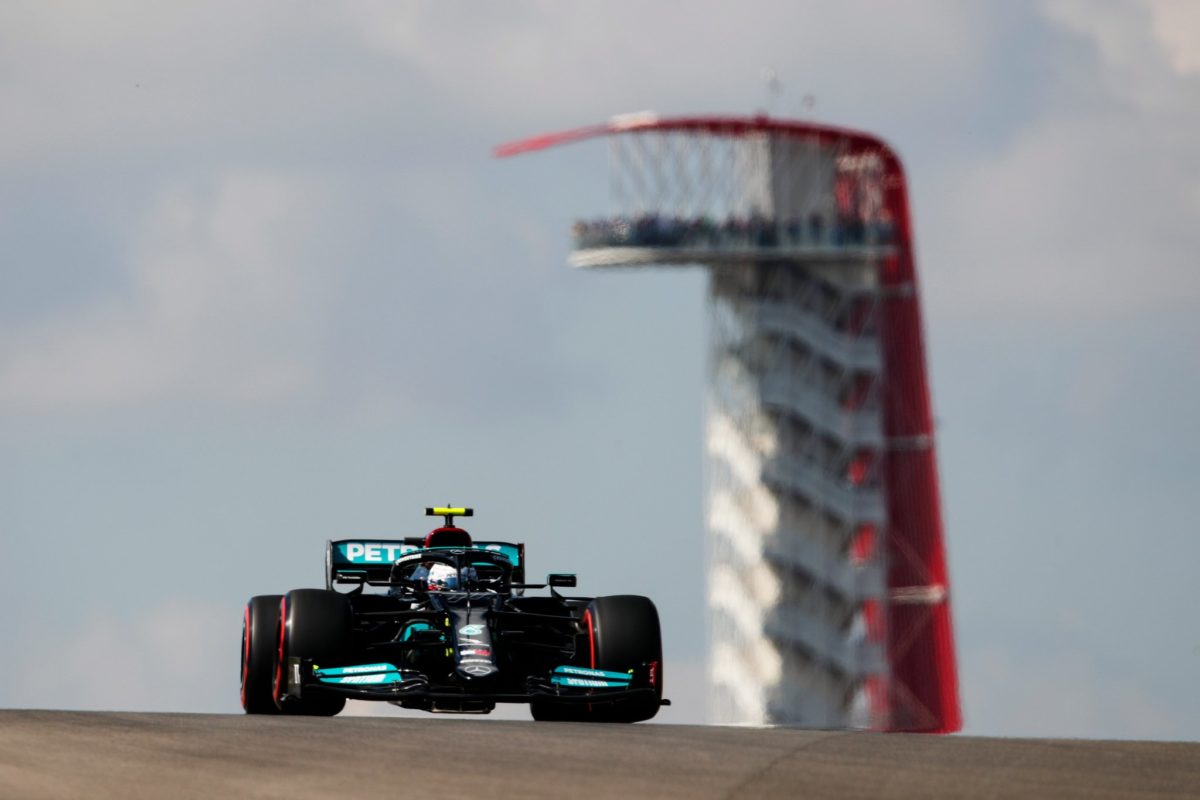 The Mercedes duo utterly dominated the session, ending it almost a second clear of the field, headed by Max Verstappen.

Sergio Perez immediately took to the circuit as the green light was shown to commence the 60-minute session.

A host of others followed suit, a mix of all three tyre compounds fitted across the field.

The early running was soon interrupted when Fernando Alonso was instructed to stop his Alpine just three minutes into the session.

The Spaniard parked in the run off at the end of the long back straight, fluid leaking from under his car.

After a nine-minute delay, the session restarted with all remaining runners heading out on track.

Mercedes opted for soft tyres for both Hamilton and Bottas, while Red Bull split its strategy with Perez on hards and Verstappen the red-walled softs.

A moment for Charles Leclerc saw the Ferrari driver off the road at Turn 6, the Monegasque appearing to lose control on the bumps in the first sector.

Like Red Bull, McLaren split its two drivers; Daniel Ricciardo out on the medium tyres and Lando Norris the softs.

The former had the early running, recording the third fastest time after 25 minutes with a 1:37.458s.

At Alpine, the squad had Alonso’s car recovered during the session, getting it back into the garage shortly before the halfway point of the session.

During the session it was revealed that Bottas would take a grid penalty after Mercedes opted to fit a new internal combustion engine to his car.

It will result in a five-place grid drop, as opposed to the penalties set to be experienced by Sebastian Vettel and George Russell who will start Sunday’s race from the back.

Vettel put the Aston Martin fastest with a 1:36.344s, though the time didn’t stand as he ran wide of track limits at Turn 9.

He was not alone, a bevy of drivers running wide at both Turn 9 and Turn 19, the two locations officials are monitoring this weekend, resulting in a laundry list of deleted lap times.

That was usurped by Verstappen with a 1:36.049s, the top three times all set on the soft compound tyres.

Times then lowered first to 1:35.096s, almost a second clear of anyone else.

With just under 20 minutes remaining, Alonso rejoined the session on the same soft compound tyres as he’d been fitted earlier.

Alonso’s first timed lap was a conservative 1:38.785s, leaving him 18th and fastest only than the two Haas.

Mazepin struggled for pace, his session best of 1:42.239s outside of 107 percent of Bottas’ session best.

In the final moments of the session, Perez and Mick Schumacher made contact.

Turning into the left-hander off the back straight, the Haas driver appeared to turn in on the Red Bull, having not seen the approaching Mexican up his inside.

Kimi Raikkonen also had a late moment, losing the Alfa Romeo at Turn 9 but able to recover.

The session ended with Bottas and Hamilton well clear of the field, Verstappen almost a second down in third, and Leclerc almost 1.5s down in fourth.

More than seven seconds covered the field, with just under four across the leading 19 runners, the outlier being Mazepin.

Free Practice 2 is scheduled to get underway at 07:00 AEDT.