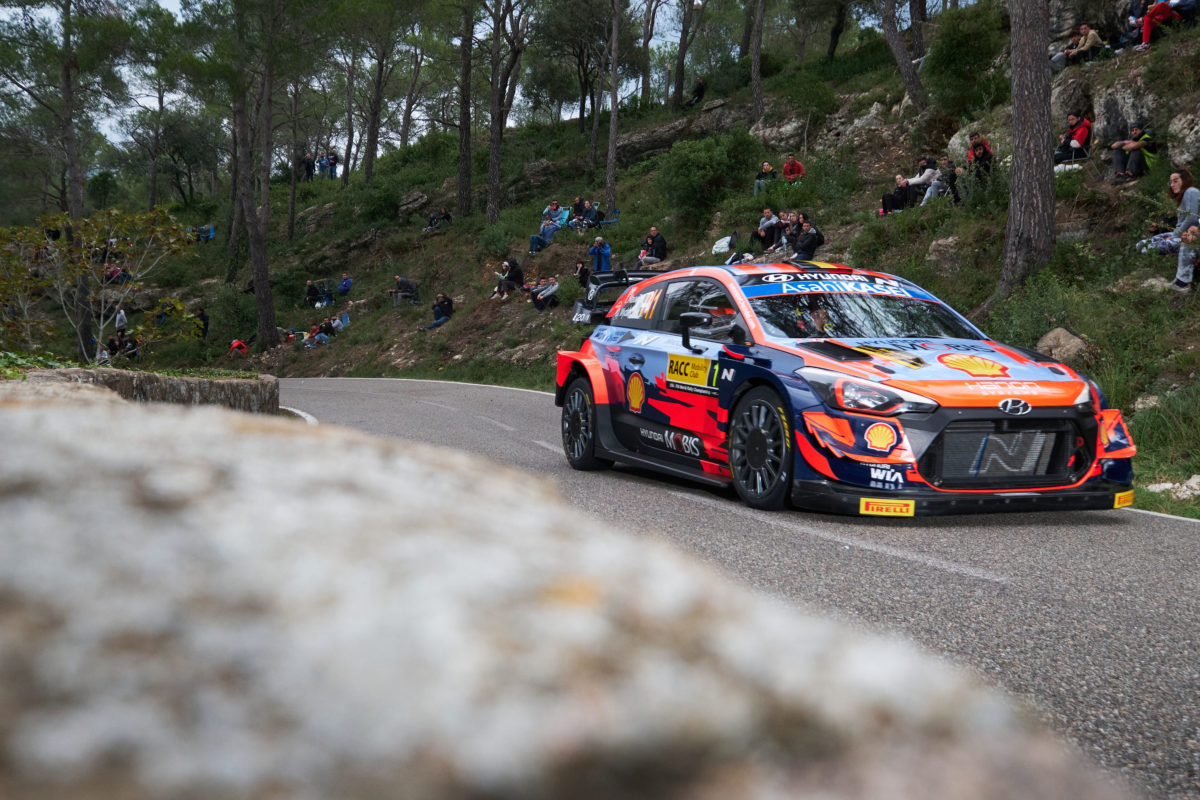 Thierry Neuville has won Rally Spain while Elfyn Evans finished second, ensuring the World Rally Championship title fight will go down to the final round.

Dani Sordo wound up third overall and Sebastien Ogier fourth, meaning the latter has a 17-point lead over Toyota Gazoo team-mate Evans at the top of the championship table.

Neuville set up his victory with a run of seven straight stage wins spanning Friday and Saturday in the Catalunya-based tarmac event, but it was fellow Hyundai driver Sordo who won all four stages which were held on the final day.

The latter ended Saturday in fourth overall but gained a position at the expense of Ogier by winning Stage 14, the first run through Santa Maria, when he beat Neuville by 0.7s.

Sordo then edged his Belgian team-mate by a 0.2s margin on Riudecanyes 1, and prevailed by 0.7s over Ogier when the field took on Santa Maria again.

In the Power Stage, a repeat of Riudecanyes, it was Sordo fastest again, by a margin of 1.4s over Neuville.

Evans gave up ground to Ogier on SS15 and SS16 but pipped the Frenchman by 0.3s when he took third on the Power Stage, meaning another crucial point gained in the championship battle.

While Hyundai Motorsport won 13 of the 17 stages, and Neuville the first nine of those 13, there was a late scare for him and the team.

The #11 i20 had a starter motor issue ahead of the Power Stage and co-driver Martijn Wydaeghe pushed it into regroup before the crew was able to re-fire it.

“I am relieved to get to the end of this rally, to be honest,” said Neuville.

“It has been a tough weekend, and not without its challenges. We have fought incredibly hard across all stages, taking a lot of fastest times, and gradually extending our advantage. The result itself probably doesn’t show how much we’ve had to work.

“We had a good clean run until the final stage; everything was working perfectly up to that point.

“Unfortunately, we had a lot of stress before the Power Stage with an engine starter motor issue. That was the only disappointing aspect of an otherwise positive rally.

“Thanks to Martijn for another good job, and our second win together, as well as to Dani [Sordo] and Cándido [Carrera, co-driver] for their podium result.”

For Sordo, the podium is his second of the season and first with his new co-driver Carrera.

“Honestly you can’t imagine how happy I am, not only for myself but also for Candido, as it’s our first podium working together,” said the Spaniard.

“He has been working really hard to get us to this level. We couldn’t have done any more, we have pushed in every stage. Thanks to all my family and the supporters, who have been cheering us on this weekend.

“We have been involved in a fantastic battle with Sebastien and it has been a pleasure to drive here.

“Thanks to the team for giving me such a competitive car that has allowed us to fight, and for supporting me always. I am so happy.”

Ogier had a drama of his own when he was fined for a traffic breach and failing to stop for police on a road section on the Saturday.

There are 30 points on offer, including the maximum five for winning the Power Stage, when Rally Monza closes out the 2021 World Rally Championship on November 19-21.