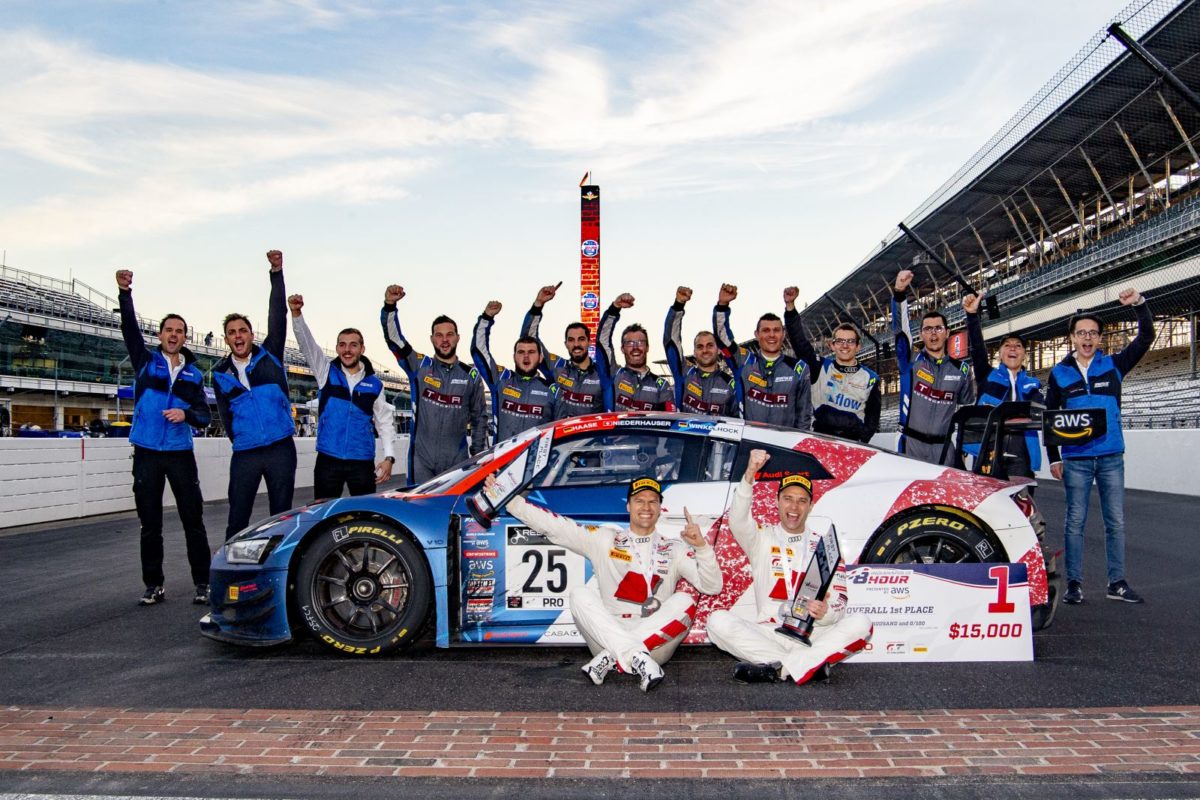 Audi has won the Indianapolis 8 Hour in dramatic circumstances courtesy of Sainteloc Racing and the trio of Christopher Haase, Patric Niederhauser, and Markus Winkelhock.

The victory is Audi’s eighth in Intercontinental GT Challenge history and gives it a sizeable lead in the manufacturers’ standings after two of rounds so far of three in 2021.

With just over 90 minutes left on the clock, and the Safety Car at the head of the pack, Raffaele Marciello held first position in the #89 AKKA ASP Mercedes-AMG, ahead of Niederhauser in the #25 Audi and Callum Ilott in the #71 AF Corse Ferrari.

Almost as soon as the field was let loose again, Marciello dropped a wheel into the grass exiting Turn 6, which gave Niederhauser the run down the following straight.

The Italian went defensive at Turn 7 and the Swiss driver followed him, the result being that both ran wide and Ilott marched through a big gap to take over top spot.

Niederhauser did at least get by Marciello and followed the #71 Ferrari until Sainteloc called him in for a final pit stop with around 50 minutes to go.

As that was going on, disaster struck for Ilott when he tripped up on a GT4 entry at Turn 1, sideswiping both the Aston Martin on his right and the wall on drivers’ left.

Dries Vanthoor filtered to the lead in the #32 WRT Audi under the Safety Car period which ensued, ahead of Jules Gounon in the #99 Craft-Bamboo Mercedes-AMG and Niederhauser.

The restart came with a little under 40 minutes to go, and it was Craft-Bamboo’s turn for their race to unravel.

Initially, Gounon copped a hip-and-shoulder from Robin Frijns when the latter fired the lapped #37 WRT Audi down the inside at Turn 1.

Later that same lap, Gounon tangled with the #59 Crucial McLaren 720S being piloted by Ben Barnicoat, which finally finished the #99 Mercedes-AMG off.

Vanthoor had several lapped cars protecting him in the queue when the race went green once more, but that mattered little when Car #32 copped a drive-through minutes later for failure to follow Race Control’s instructions.

Niederhauser assumed a lead which he would not relinquish, making for Sainteloc’s second ever IGTC race win despite Car #25 also being set back by a drive-through earlier in the race.

Haase, who now has a record-extending five victories in the competition of his own, joined the Swiss driver in kissing the row of bricks, but Winkelhock had already left the circuit in order to be at the birth of his child.

The final round of the 2021 Intercontinental GT Challenge is the Kyalami 9 Hour, on December 2-4.