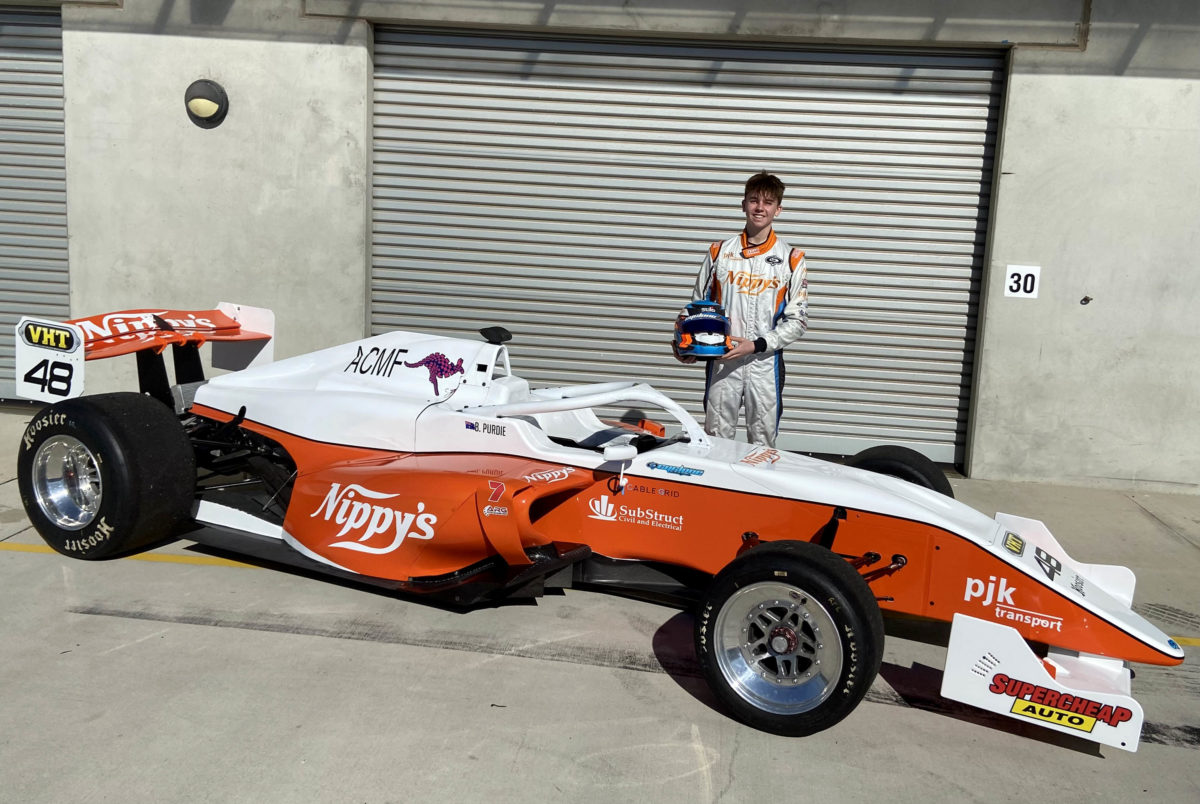 The graduate from Australian Formula 3 and the Australian Prototype Series will run his regular #48 and sport backing from beverage brand Nippy’s when he joins the category this November at Sydney Motorsport Park.

Purdie boasts multiple state karting titles since his debut in 2014, and claimed the SA Sports Car invitational Series driving a Wolf Prototype Series racer upon his switch to racing cars in 2020.

He currently sits second in the Australian Prototype Series and the Australian 250cc Superkart Championship, and has competed in wings and slicks already.

Purdie scored pole and finished second to national champion John Magro in a recent Formula 3 event held at The Bend, before testing an S5000 at the same circuit last Sunday under the supervision of legendary Australian Formula 2 champion Ian Richards.

“The test day was good,” said the Adelaide driver.

“It was my first time in the car and it took a few sessions to get used to it.

“By the last session I was finding the limit, making a few tweaks and playing around with it.

“The power is ridiculous. I’m used to prototypes and Formula 3 cars with four-cylinder engines but with the V8 it’s crazy, it just keeps going in any gear.

“It’s been great having Ian around. He’s very experienced in F3 and open wheel cars and is very valuable to have on our side.

“I’m really pumped to head to Sydney and Bathurst and I think the S5000 will be insane at those two tracks.”

88 Racing will confirm a driver for Car #88 soon, with incumbent Cooper Webster working on budget.

“We will run ‘open book’ with car #88 as a team with full knowledge between the drivers, car set up driving styles and more.

“It’s going to be quite exciting have two quality drivers race side by side in the one team and with no secrets.

“It’s also great to have another young driver coming into the team and the category. Whilst critics may say they are inexperienced in race craft or race tactics, the idea is to grow the category to a point that it is the number one destination for up-and-coming drivers like Formula Holden once was.

“We expect to announce the driver of Car 88 within a week after completing final negotiations and budgets.

“We’re going to have a strong two-car team for the S5000 Tasman Series which will set us up well for the 2022 S5000 Australian Drivers’ Championship.

“For the Tasman Series we have engaged the services of an experienced, respected Engineer and we’re grateful to add that talent pool to the team as we slowly grow our base.

“The lessons learnt over the last 12 months has serviced us well into fielding two competitive cars and allowing the drivers to do their thing.

“That is going to be quite exciting.”

The Tasman Series supports the Beaurepaires Sydney SuperNight on November 19-21, then the Repco Bathurst 1000 on November 30-December 5.