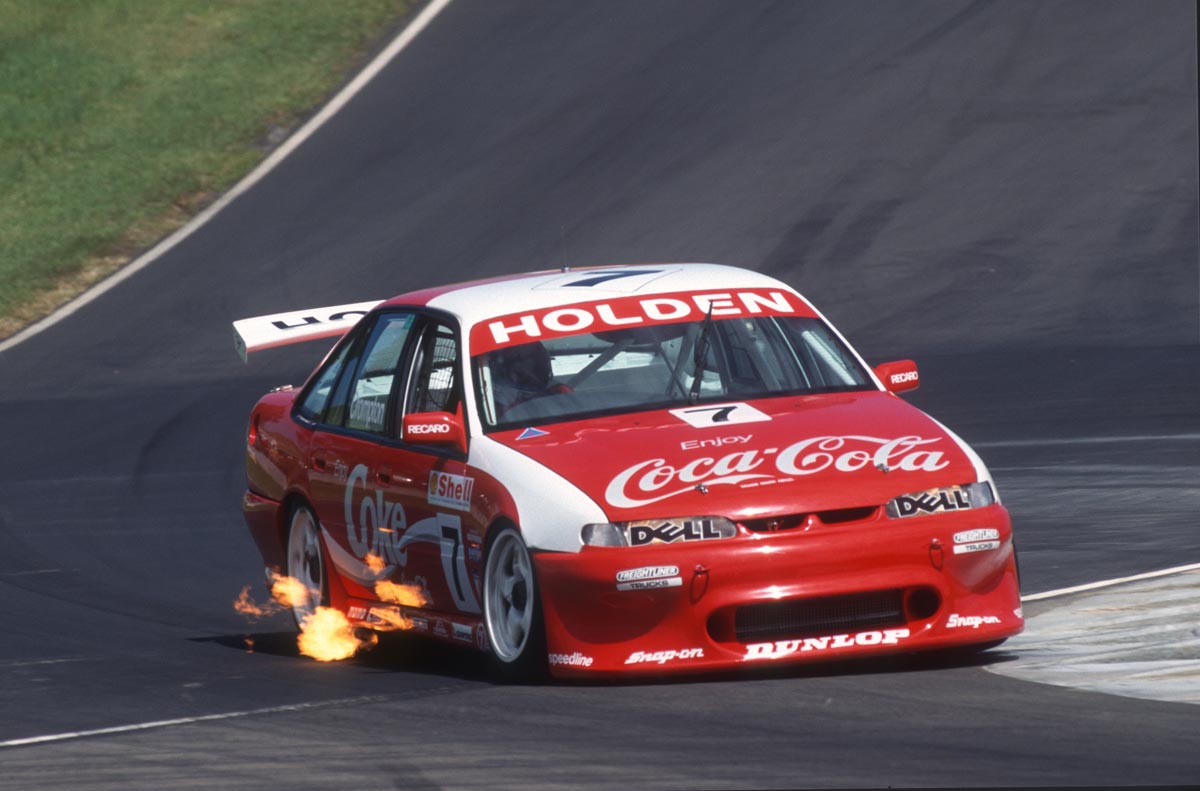 Neil Crompton in action at Eastern Creek in 1996. Picture: AN1images.com

For someone widely considered the voice of Supercars, Neil Crompton is a modest, humble, low-key character.

That’s what made the recent release of his autobiography Neil Crompton: Best Seat in the House all the more fascinating.

His racing days saw him compete in Australia and abroad, with two Bathurst 1000 podium finishes among his achievements.

Since retiring at the end of 2002, Crompton has become a stalwart of the broadcast team, and a generally popular one at that.

But the 61-year-old needed some convincing to tell his story.

“It was a weird experience; I mean it would be the same with any person,” he told Speedcafe.com.

“You have actually got to really battle sometimes to put it into some kind of a logical order because it’s just a giant, mushy ball of fog and you’re busy doing what you do on a day-to-day basis in this industry and yesterday is yesterday.

“So there was a couple of phases in this. [Aaron] Noonan was really keen to do it a while ago and I was a bit ambivalent about it for a couple of reasons.

“One, I knew it was going to be a big task and I’m a fortunate person in that I have got a really busy life, lots of different things going on, so it was like ‘where and how am I going to fit this in’.

“And then the second part of it, of almost equal importance, was that in all honestly, I didn’t think it was particularly interesting. I was like really, I can’t imagine that anyone is going to know or care.

“He pressed me on it a little bit and it kind of went away, so this would be maybe 18 months ago.”

When interest emerged from Harper Collins, the initiative was revived and soon the wheels were turning.

When his prostate cancer diagnosis struck in April, it created a window of time in his otherwise busy life, albeit adding the stress of deadlines at an untimely moment.

Crompton laughed writing is far from his forte, but that perhaps was not the most awkward element of the project.

“Frankly, despite being someone who does something publicly for a living, I’m not big on personal slide nights,” he said.

Exploring his life to date did bring with it a realisation of how good he’s had it, though.

“I think what it has done is it has kind of reminded me I’ve been extremely fortunate,” said Crompton.

“It’s been a decent innings and it’s a moment for a pause.

“I like the idea of my wife and my kids and my immediate family can see something that has been put into A to Z where otherwise it would never have happened.

“So it puts a little bit of discipline around your story. I guess what it has done is made me go, ‘yeah okay, I have been to that joint, or I did meet that person, or I did drive their car, or whatever’.

“If you think about life from a standing start as a race fan and then all of those different things that have happened along the way, I am proud of it. I just don’t beat my chest about it too much.

“But when you stop and think about going to Bathurst and your co-drivers are [Peter] Brock and [Jim] Richards and [Glenn] Seton and [Craig] Lowndes and [Wayne] Gardner, you’re sort of like, ‘that sounds pretty good’.”

Crompton will return to the commentary box when the 2021 Repco Supercars Championship resumes at Sydney Motorsport Park on October 29-31.

His autobiography is available to purchase through the V8 Sleuth Bookshop.