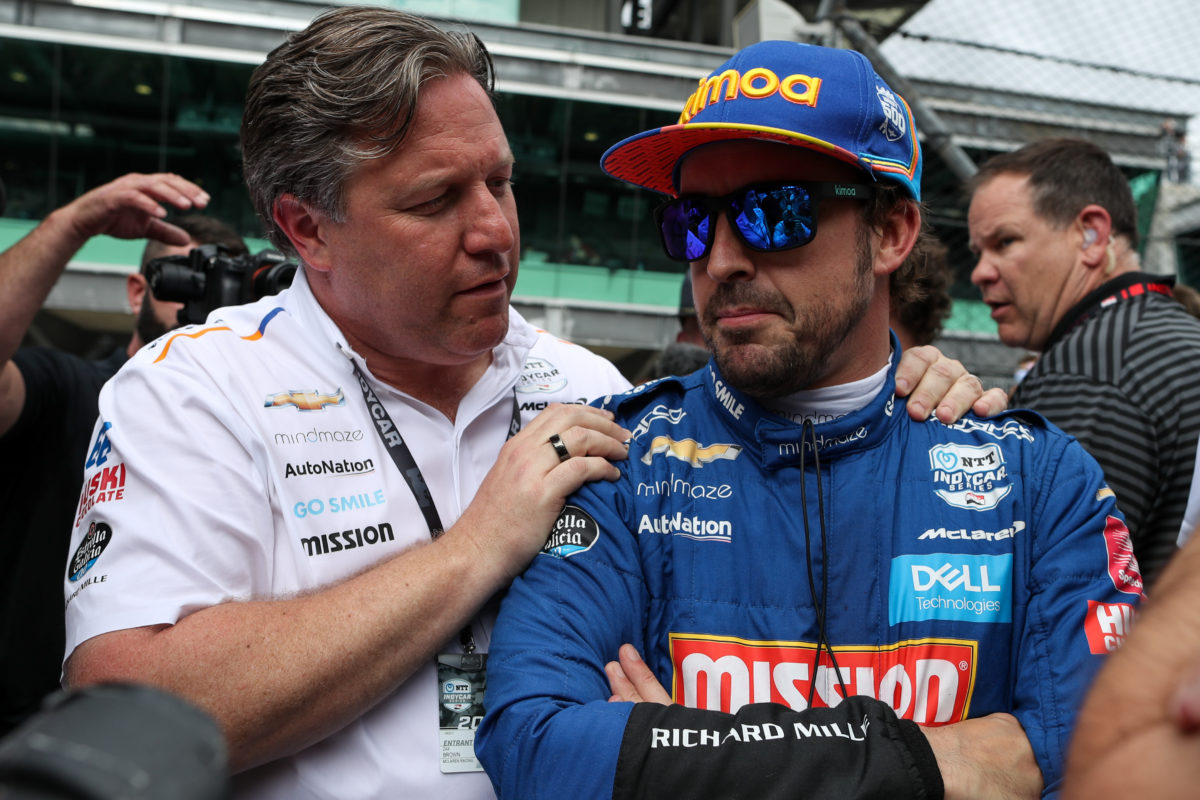 Zak Brown with Fernando Alonso at Indianapolis in 2019

Zak Brown has confessed to Speedcafe.com that he believes he is the reason Fernando Alonso failed to qualify for the 2019 Indianapolis 500.

The Spaniard attempted to make his second appearance at the American event in what proved to be a disastrous project that saw him bumped from the race in the Last Row Shootout.

It came as a humiliating blow after Alonso put in a promising rookie drive in 2017, leading for a time before a late engine failure took him out of the race and left him 24th in the classification.

However, having worked with Andretti Autosport for the 2017 Indy attempt, in 2019 McLaren operated its own project.

According to Brown, it was that decision which underpinned its failure.

At a time when McLaren was beginning to diversify its racing portfolio, the American suggests he was guilty of taking his eye off the ball.

“If you don’t give the same dedication to Extreme E or IndyCar, or even eSports, you’ll fail,” Brown told Speedcafe.com of the team’s expansion.

McLaren’s current IndyCar model has been to buy a stake in Schmidt Peterson Motorsport, which it did so ahead of the 2020 campaign, and then increasing that investment once it was clear the project was stable and successful.

It’s a similar case with Extreme E, the operation having gone on a recruitment drive to staff the team rather than using existing personnel – though some have moved onto the project.

Not having that separation and equal focus, Brown reasons, was a significant contributing factor to the failed 2019 programme.

“Because I was laser focused, rightfully so, on Formula 1, [the] IndyCar effort in 2019 suffered,” he admitted.

“I think my learning there is whatever we race in, you have to have the right amount of resources and dedication to each project.

In the middle of 2019, McLaren was in the midst of rebuilding its F1 operation after a difficult period with engine partner Honda.

Key personnel were being hired, and on track the squad had an all-new driver pairing, including then-rookie Lando Norris.

It made for a different challenge for Brown, one centred on stabilising the squad ahead of its march back up the F1 pecking list.

“When I look back at 2019, I had hired Andreas Seidl, but he hadn’t joined yet,” Brown recalled.

“I had Gil [de Ferran] on Formula 1, but by the time I shift –  Gil’s first race in IndyCar was the Indy 500 and in Andreas’ first race in Formula 1 I think was either Barcelona or Monaco.

“I should have waited,” he confessed.

“I did that wrong and paid the price.”

It was a tough lesson to learn, and one he has taken onboard as he’s continued to rebuild McLaren.

In 2021 it’s been a race winner in both IndyCar and Formula 1, coming within touching distance of the series title in the former.

“Everyone that we have from McLaren on the IndyCar team, are dedicated to the IndyCar team; they’re past Formula 1 personnel, but they don’t have dual roles, because you can’t be in two places at one time,” he explained.

“The reason why we’ve now made the acquisition in IndyCar, one of the reasons, is Andreas is doing such a great job with Formula 1.

“I’m very comfortable, I don’t need to be every race, because Andreas has got the Formula 1 team under control, his leadership’s great.

“My job is more to help make sure he has the resources that he needs, and the sponsorship and things of that nature.

“Taylor Kiel is doing an awesome job of running the IndyCar team.

“So I think 2019 was probably one year too early, is my learning.

“I didn’t give it enough attention because I had some red flags early on.

“My instinct was I wasn’t on top of it, but I kept going ‘well I’m going to have to deal with that because I’m bringing Andreas onboard, and James Key just started’.

“I just didn’t give IndyCar the time and attention it deserved, and that’s the result we got because of it, so that’s on me.”