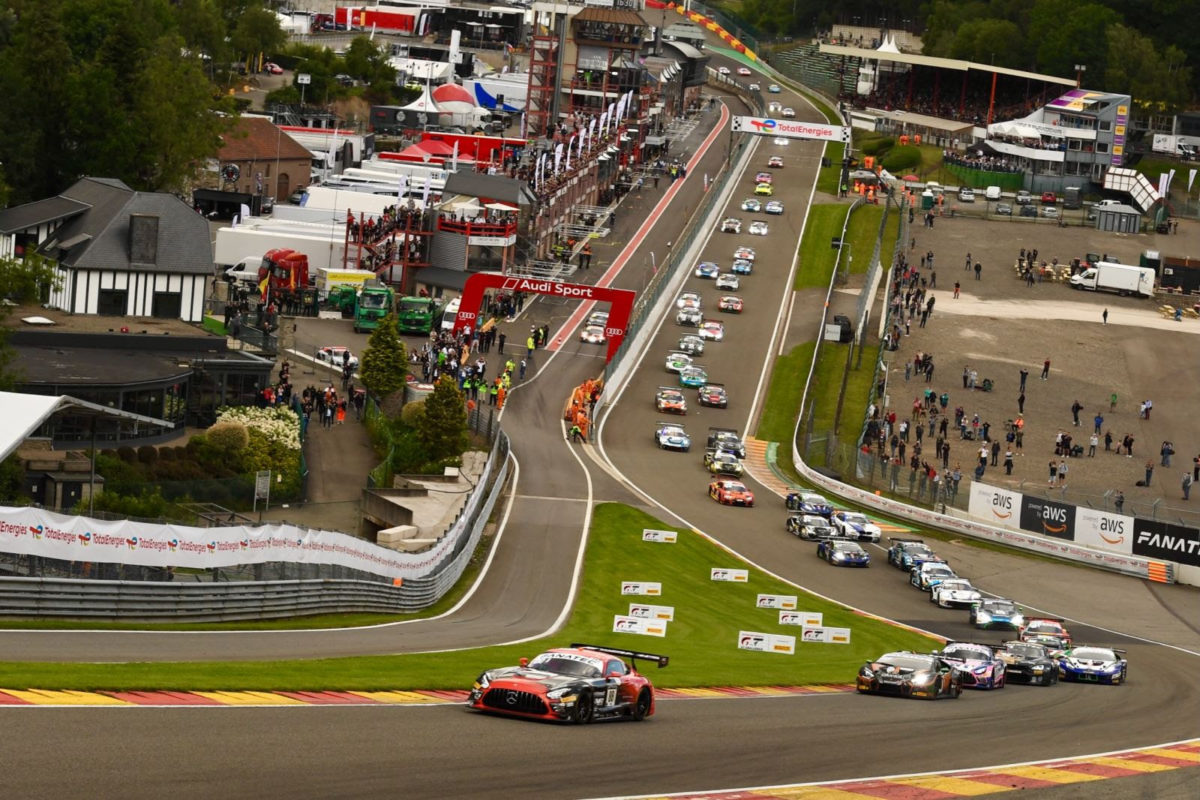 The 2021 24 Hours of Spa, a round of GT World Challenge Europe and the Intercontinental GT Challenge

The body behind the Bathurst 12 Hour and Fanatec GT World Challenge Australia Powered by AWS is pushing for a change to the FIA’s driver categorisation system.

SRO Motorsports Group Stephane Ratel has announced a proposal which would essentially see professional drivers concentrated into a single ranking tier, and a finer distinction between amateur and up-and-coming drivers.

The system is presently made up of four tiers, with Platinum at the top, then Gold, Silver, and finally Bronze.

SRO’s proposal would not see a change to those aspects of the schema, although a number of drivers who are currently Gold would be bumped up to Platinum, and some currently Bronze to Silver.

Whether there are indeed local implications for the new system, should it come to pass, remain to be seen, and it should be noted that GT World Challenge Australia’s sporting regulations are tailored somewhat relative to those of its sister competitions (For example, the existence of a Trophy class).

However, Ratel believes it would better reflect the evolution of GT racing.

“But behind these two classes, which are basically under-represented, we have a very, very large class of the Silver drivers.

“It’s about time we divide the Silver class between one class which is Silver for the Silvers of the beginnings – which are the very, very good gentlemen drivers – and which are the young drivers that come to GT with very limited prior experience, and that Gold becomes the category for all the young drivers that have started racing when they were young, that have gone through the ranks of karting, single-seater, and arrive in GT with a view to become professional.” 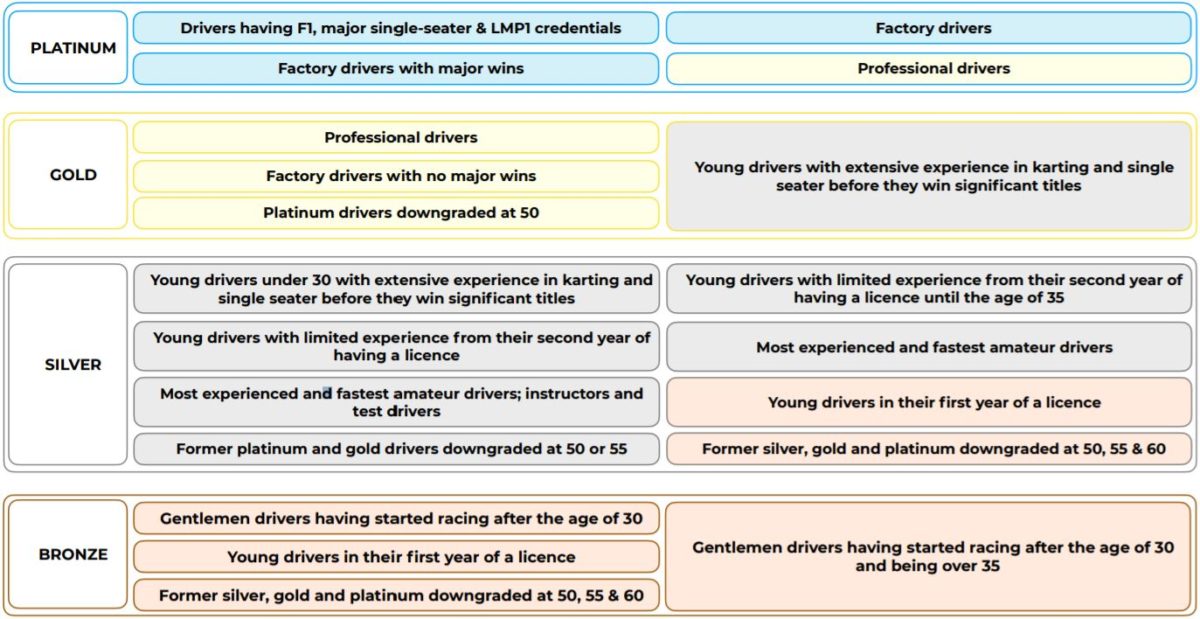 A comparison of the current (left) and proposed (right) categorisation systems, as presented by SRO

According to a graphic presented at that press conference (See above), Platinum would become comprised of ‘Factory drivers’ and ‘Professional drivers’, the latter of whom are currently Gold.

Gold would then be for ‘Young drivers with extensive experience in karting and single seater [categories/series] before they win significant titles’, Silver for other young drivers as well as the best amateurs, and Bronze essentially for the rest.

The current system is said to be a legacy of the predominantly amateur nature of GT competition when SRO developed it around a decade-and-a-half ago, and which no longer applies.

“We created the driver categorisation system when we introduced the GT3 European Championship back in 2006,” explained Ratel.

“At the time, it was an amateur championship; your Bronze drivers were real gentlemen drivers, and the Silver drivers were the young drivers.

“But, the young drivers were very often the sons of the gentlemen drivers, and most of them – the large majority, almost all of them – didn’t have any karting or single-seater experience; they were coming into racing with coming into GT.

“But, progressively, these became more and more professional and at the end, what we have today, [is] two classes, Gold and Platinum, for the same type of drivers.”

Driver rankings are, of course, but one aspect of the sporting regulations for GT World Challenge (GTWC) competitions and the Intercontinental GT Challenge (IGTC).

The classes in which cars compete are defined by which drivers are allowed to contest them and, in the SRO universe broadly, range from Pro down to Am.

The finer details vary depending on whether the race(s) form part of the GTWC Endurance Cup, GTWC Sprint Cup, or Intercontinental GT Challenge (IGTC); how long the race is; and sometimes which particular continental competition the race is part of.

However, a key point to note is that, in short, a Pro-Am entry currently has to have at least some Bronze representation amongst its drivers. If the new categorisation system comes to Australia, it could mean a new ranking for drivers such as Yasser Shahin. Picture: Australian Racing Group

For example, joint Pro-Am championship leaders Garth Tander and Yasser Shahin, who pilot the latter’s Audi, are ranked Platinum and Bronze respectively, according to the FIA’s database (as at today).

What the proposed system would mean in that case is not yet clear.

Shahin is at least arguably the latter half of the “Most experienced and fastest amateur drivers” reference in the framework above, which could mean a Silver ranking.

On the other hand, he is also over 35 years of age and started driving after 30, which points to ongoing Bronze status, per that same framework.

The FIA’s current driver categorisation regulations rely on several criteria to define the ranking tiers and, depending on exactly how the new system would be specified, Shahin might not be able to share a car with Tander in the Pro-Am class going forward.

However, it should also be noted that Ratel has foreshadowed changes to class structures in conjunction with the revision of driver rankings.

Among those changes Ratel spoke of in a separate Q&A circulated after the press conference were the implementation of a ‘Gold Cup’ and a possible rule tweak for the Pro class of the Sprint Cup, the European equivalent of Australian GT’s sprint competition.

“There would need to be some changes,” he said of the class structure.

“We want to avoid the downgrading of Silver drivers to fit the Pro-Am class, which must remain for two Bronze drivers and a professional, by introducing a new class for a Gold or Platinum, a Silver, and a Bronze.

“This will be named the Gold Cup, bringing us back to the four categories we had before the Am class faded away.

“We are also considering mandating that each Pro car in the Sprint Cup runs at least one Gold or Silver driver, knowing that most current Gold drivers will be upgraded to Platinum in the SRO classification.

“This is already the case for most teams, so it would just be a case of making it official.”

SRO has put the idea to the FIA, but will implement its own interim system if it is not adopted by the governing body in time for the 2022 season.

“That’s the proposition we have put forward to FIA, but we know the way FIA operates and we’re sure it’s not something which is going to be done for next year,” noted Ratel.

“We hope that the FIA committee will follow our regulations. If they don’t, us as SRO, we will give them an upgrade – we call it double star upgrades.”

The fourth and final round of the 2021 GT World Challenge Australia season is set to support the Repco Bathurst 1000 event, which begins on November 30.