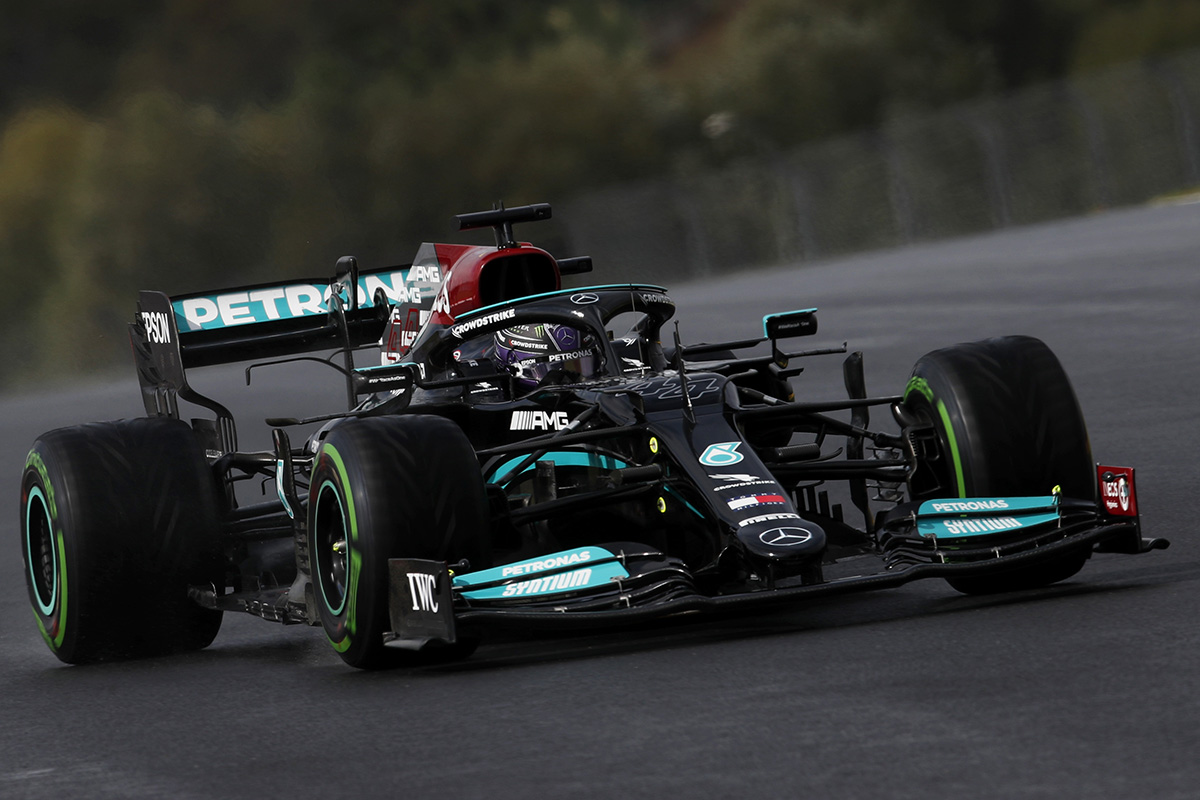 Lewis Hamilton has explained why he initially ignored calls to pit during the Formula 1 Turkish Grand Prix.

Hamilton crossed the line fifth in Istanbul Park, dropping out of the podium places when he stopped with eight laps remaining.

He then battled to hold on to fifth from Pierre Gasly, ultimately securing the place but ceding the world championship advantage to Max Verstappen.

The Red Bull driver holds a six-point advantage at the top of the standings with six races remaining, though had Hamilton finished third the pair would be split by only a single point.

“We didn’t know if it was going to dry or not but it was slowly getting drier,” Hamilton explained.

“I was in I think third at one stage and hopeful that I would miss a stop.

“Everyone else did that inter switch and I was hopeful that if there was another one to slicks that would gain me positions.

“We could have maybe stopped earlier,” he added.

“When I caught Perez, maybe we could have could have stopped, but at that point, you just had no idea if it would have been dry or not.

“It was frustrating at the time because obviously I could see second and then all of a sudden, I’m back in fifth.”

During the race, Mercedes had attempted to call Hamilton into the lane, only to be overruled by the seven-time champ who remained on track.

Team boss Toto Wolff suggests third was on the table had Hamilton following the team’s instructions to stop earlier.

“In the car it’s always very difficult to assess your position in the race,” Wolff said.

“I think we could have either played it very conservative and pitted him when Verstappen/Perez at the time, and fight it out on track, probably come out behind Perez and fight for P4/P3 on track.

“The other thing was to try to go along and either think whether it’s transitioning to a dry tyre or just not stopping anymore.

“So there was two possible options that sounded quite good.

“Unfortunately, the pace just dropped off much quicker than we would have needed in order to stay third or even fourth or even fifth,” he added.

“We almost lost the [pit] window against Gasly; [it was] then decided okay, that’s not going to happen and let’s pit and consolidate fifth.

“In hindsight now we’d have pitted 10 laps earlier and fought it out on track [and] probably finished third or fourth, but there was much more to gain from the other more dynamic variant.”

Esteban Ocon was the only driver who completed the race without making a stop, haemorrhaging time in the closing laps as his intermediate tyres wore down to the canvas.

The Frenchman had a sufficient buffer however to hang on to his position, even allowing for a 1:39.5 and 1:37.3 in the final two laps.

Hamilton ultimately stopped on Lap 50, having sat third, 13.7s down on team-mate Bottas in the race lead, 11s ahead of Charles Leclerc in fourth and a further 1.7s clear of Perez in fifth.

The Mexican was turning in laps in the mid-1:32 bracket, and set his fastest lap of the race on Lap 53, while Hamilton’s times in the laps preceding his stop fluctuated between 1:34.5 and 1:35.

It’s therefore almost certain Perez would have caught and passed the Mercedes driver in the closing laps, while a late drop off in performance would likely have also allowed Leclerc through.

“Time will tell,” Hamilton said of how costly missing out on the additional points for third will be in the championship.

“If I had stayed out you don’t know if I would have held position but I am a risk-taker so I would have wanted to take that risk.

“It’s not as big a loss as if you look at the last race; [Verstappen] lost seven points I think it is and [in Turkey] I lost eight, so it’s similar.

“I’ve just got to work hard to try not to drop any more points moving forwards.”