Round 1 of the 2021 GT World Challenge Australia season

SRO has revealed four of the venues which will play host to Fanatec GT World Challenge Australia Powered by AWS in 2022.

In the annual SRO Motorsports Group press conference, it was announced that Phillip Island, Bathurst, ‘Sydney’, and Sandown will all feature at least one round of what is otherwise known as the Motorsport Australia GT Championship.

There are also two ‘TBC’ listings, and a six-round calendar would be consistent with the first two versions which were drawn up for the 2021 season, before new/renewed COVID-related restrictions caused more upheaval.

The current campaign began at Phillip Island in March before moving to Mount Panorama as part of April’s Bathurst 6 Hour event, and a graphic shown during the presentation suggests those two circuits will again be Rounds 1 and 2 respectively.

‘Sydney’, presumably Sydney Motorsport Park, is listed next, followed by TBC, Sandown, and another TBC.

No word has yet been given on the breakdown of sprint rounds versus races for the Motorsport Australia Endurance Championship, the latter of which will not be awarded this year due to pandemic-related disruptions.

Reasons for the calendar, unlike those of various sister competitions, having not yet been finalised include the fact that the date of next year’s Bathurst 12 Hour has only just been decided upon, as SRO boss Stephane Ratel explained.

“Unfortunately, after the summer – their [Australia’s] winter – two of the three remaining events had to be cancelled, but we are very confident,” he said during the press conference.

The Bathurst 12 Hour is set to take place on March 18-20, pending the easing of international travel restrictions for Australia, or New South Wales at the very least.

The now customary Intercontinental GT Challenge Opener was shelved altogether for 2021 due to the closure of the nation’s external border, and COVID-19 restrictions caused all manner of disruption for every major competition in the country.

That included Australian GT in its first season under the joint management of SRO and the Australian Racing Group, but Ratel hailed it as one of the year’s “good news stories” in a separate Q&A circulated in conjunction with the press conference.

“This has been one of the ‘good news stories’ for 2021 and it has been achieved despite the obvious difficulties of COVID,” he declared.

“It was an honour for SRO to be named co-organisers of Australian GT under the Fanatec GT World Challenge Australia Powered by AWS banner.

“Thanks to our Australian partners ARG we have seen promising grids, even with interstate travel restrictions having resulted in some events being cancelled, so I think we can be pleased with the early results.”

There is one round to come in the 2021 GT World Challenge Australia season, namely a sprint affair at the Repco Bathurst 1000, an event which takes place from November 30-December 5. 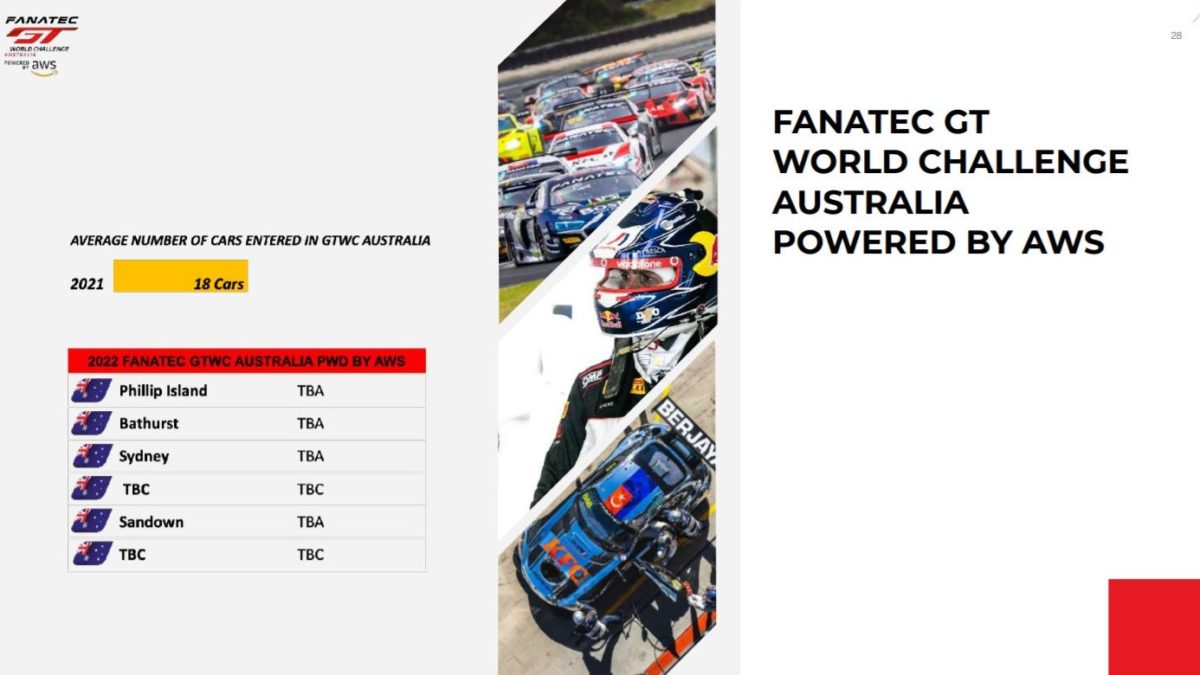