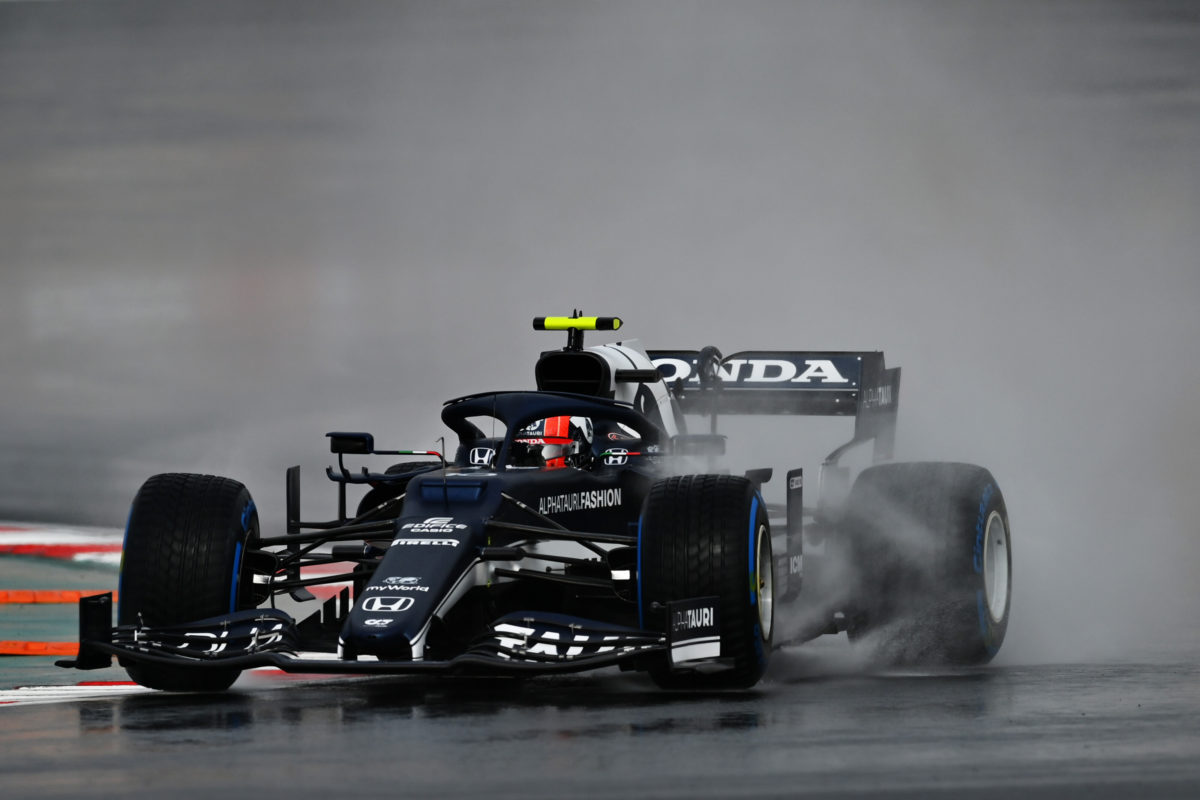 Easing conditions throughout the final 60-minute hit out saw the Frenchman get the best of them, heading Max Verstappen and Sergio Perez for a pseudo Red Bull one-two-three.

The conditions dissuaded teams from venturing out as the session got under way, with many drivers not even in their cars as the timer began counting down.

Gasly was the first on track after seven minutes on a set of full wets, followed by his AlphaTauri team-mate, Yuki Tsunoda.

The McLaren duo of Lando Norris and Daniel Ricciardo soon headed out too as it became evident there was little standing water and risk of aquaplaning.

With just three laps on the board, Gasly reported that the rear tyres were too hot, with suggestions from the pit wall that the second sector was ready for intermediate tyres.

The track quickly became far busier as conditions eased, though wet tyres were still the option of choice.

Norris was the first to switch to intermediates, the McLaren driver quickly showing there was sufficient grip for the green-walled rubber.

McLaren promptly switched Ricciardo onto a set of the shallower grooves.

On a set of intermediate tyres, Gasly had a moment at Turn 11, the kink in the middle of the back straight, the AlphaTauri aquaplaning.

A flurry of yellow flags soon followed before the red flag was shown after 24 minutes when George Russell found himself beached in the gravel at Turn 2.

Nikita Mazepin also had a spin at Turn 11, the Haas driver out of the drying wheel tracks as Gasly was moments earlier.

The session resumed with 33 minutes remaining, intermediates now the tyre of choice.

Bottas promptly went fastest with a 1:34.376s, a time quickly beaten by Sebastian Vettel and then Hamilton, the marker dropping to 1:33.636s.

Hamilton’s time came despite a sizeable moment at Turn 10, evidenced by Verstappen recording a 1:32.464s.

A lap later, the Red Bull driver spun at Turn 9, completing a neat 360 before carrying on otherwise unhindered.

Despite the flurry of drivers having moments, it was apparent conditions were ever improving as personal best microsectors became common place.

Hamilton climbed from his car with some 20-minutes, Verstappen also stepping out after going fastest on a 1:31.043s, but would step back aboard the RB16B.

In the final 10 minutes the track became increasingly quiet, while times for the most part slowed.

Leclerc pitted with four minutes remaining, suggesting conditions had improved such that the team could try slicks if they liked.

In the dying moments a flurry of activity, teams looking to be on track as the chequered flag fell so they could complete a practice start.

Gasly ended the session fastest from Verstappen with Perez in the second Red Bull third.

Ultimately, nobody braved the slick tyres despite the track looking as though it was close to the crossover point.

Qualifying follows at 23:00 AEDT this evening.