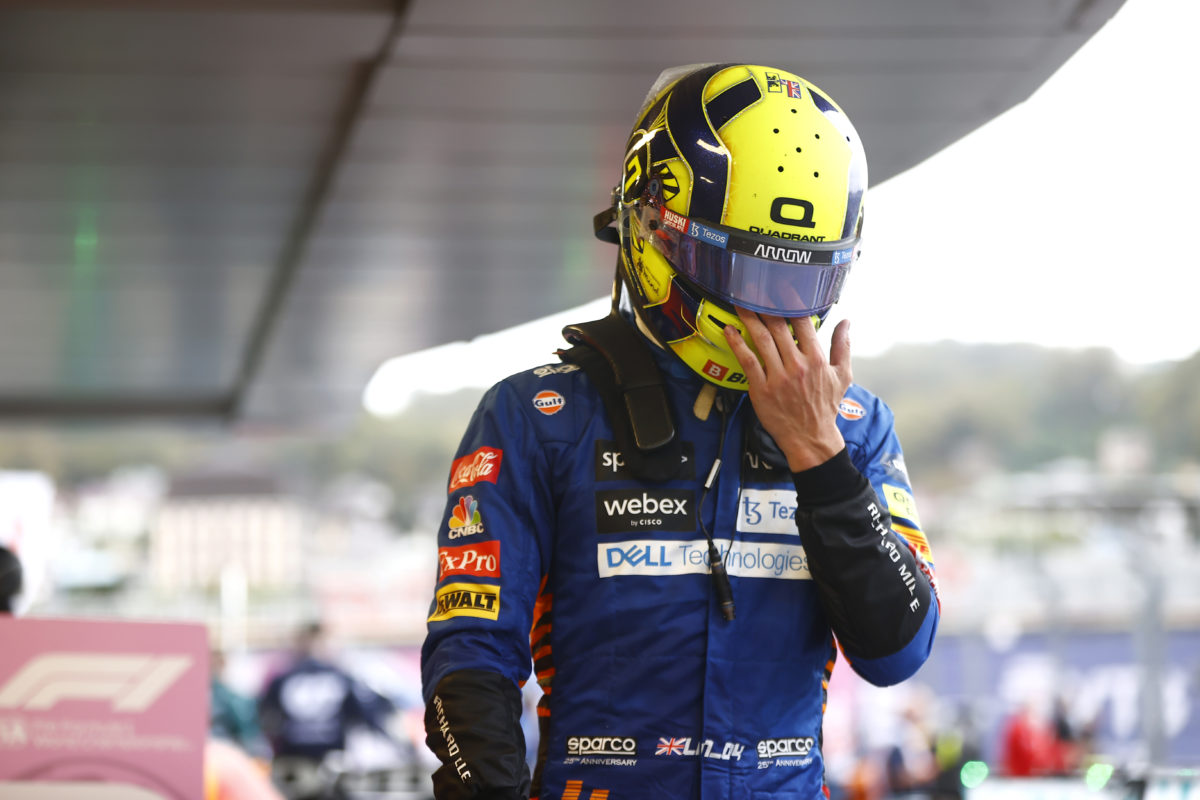 Lando Norris is taking the positives out of the Formula 1 Russian Grand Prix in which he narrowly missed out on victory.

Team principal Andreas Seidl confessed after the race that a full analysis would be undertaken to understand how the win slipped through its fingers after the pit wall failed to override Norris’ on-track call.

Norris had started from pole position, slipping behind Carlos Sainz at the start only to claim the lead shortly before the Ferrari driver pitted.

From that point on, the Brit controlled proceedings, even allowing Hamilton to close in the latter stages as he conserved his car ahead of the final laps.

“There was actually a huge amount of positives from the weekend,” Norris said, reflecting on the event.

“[I] scored my first pole in Formula 1, I still managed to lead and manage the whole race very well from start to almost finish.

“Just the pace in general and how I think I drove for the majority of the whole weekend, even from Friday practice to Sunday, and even in Sunday when it wasn’t going well, my driving was still good.

“There was many good things from both the team side and also mine, but of course they are clouded over by the results in the end of the day.”

However, the 21-year-old did admit that he and the team could have done a better job, and that the decision to stay out was clearly the wrong one.

“I think the inevitable conclusion of everyone can see now is we should have boxed, we should have seen that there was more rain coming,” he admitted.

“But what people don’t see is how this is built up, and the things behind the scenes which come from my side and the team’s, which we’ll aim to do better next time.”

While the team carried out its own analysis of the Russian defeat, Norris too has reflected and taken personal learnings from the disappointment of missing out on a maiden grand prix win.

“It wasn’t just that decision in the end of the day which could be improved, there’s many things from my side.

“I guess just dealing with the situation I was in – leading a race having Lewis behind me – that was probably not a situation I’ve been in where there’s been almost so much pressure on me as the driver, especially when the conditions started to get worse.

“The level of concentration you need is insane, and it’s something that’s very difficult to describe to a person who hasn’t been in a Formula 1 car in these conditions with Lewis and Mercedes just behind you.

“So just dealing with that pressure, being able to still talk to my team, at their highest performance… to be able to communicate with my team in just the best way while dealing with this pressure.

“A lot of the time I’m the kind of driver who doesn’t like too many communications, and I don’t talk too much. I like to just kind of be quiet and drive,” he added.

“There’s a level of when you have to add to that.

“Just being in that situation is I think, a good learning point, but that’s an experience thing, it’s not something you can necessarily just prepare for on Sunday morning.”

Norris finished the race seventh, and claimed fastest lap, and remains fourth in the drivers’ championship.