Marc Marquez has taken victory in MotoGP’s Grand Prix of The Americas as Fabio Quartararo extended his championship lead by finishing second.

Bagnaia had started from pole but dropped as far back as sixth, while team-mate Jack Miller arguably had an even more up-and-down afternoon, charging from 10th to fourth but ultimately finishing eighth after 20 laps.

For the man on the #93 Repsol Honda, however, the Circuit of The Americas saw him take his second victory since coming back from injury, and seventh in eight starts there.

At the start, Marquez had got the jump on the field from third on the grid and led into the first corner, where Quartararo went up the inside of Bagnaia to take up second place.

Alex Rins (Suzuki Ecstar) passed Bagnaia for third as they ran down the hill, while Miller had gained one position from where he started to sit ninth by the time they arrived at the back straight.

Jorge Martin (Pramac Ducati) ran fifth initially before he too overtook Bagnaia, on Lap 2, during which Takaaki Nakagami (Idemitsu LCR Honda) crashed out of sixth position at Turn 12.

Miller had gone against the trend by opting for the hard compound Michelin front and rear, and was aggressive early on despite an ambient temperature into the thirties (Celsius).

The Queenslander pulled off a double pass on Joan Mir (Suzuki Ecstar) and Brad Binder (Red Bull KTM) on Lap 3 at Turn 12 to move up to sixth, yet still reset the fastest lap that time around.

Martin was proving a nuisance to Rins and used the horsepower of his Ducati to go by the third-placed Suzuki on the run to Turn 12 on Lap 4, as Quartararo continued to tail Marquez at the very front of the field.

However, Quartararo would soon come under pressure from Martin and while the championship leader had to stave off the Spanish rookie, Marquez bolted.

Meanwhile, Miller went by team-mate Bagnaia on Lap 6 at Turn 1, and then Rins at Turn 12, putting #43 up to fourth.

Bagnaia also passed the #42 Suzuki of Rins as they ran down the back straight on Lap 10, meaning he was fifth at the halfway mark.

Miller got close to Martin in the chase for a podium position but had drifted to over a second back from the Pramac rider when he came under pressure from Bagnaia after around a dozen laps.

‘Jackass’ had said recently that he would be willing to help his team-mate’s championship bid, and so it was that he looked over his shoulder and then stepped aside down the slalom run on Lap 13, gifting fourth position to Bagnaia.

Miller naturally put up more resistance when Rins caught him, but the Suzuki rider got the job done at his second attempt, going down the inside of #43 on Lap 15 at Turn 15.

Attention then turned to the battle for the final step on the podium, as Bagnaia made ground on Martin.

The rookie had his factory Ducati counterpart breathing down his neck after he had a front-end moment through the downhill section on Lap 17, resulting in a shortcut at Turn 4/Turn 5.

Martin would be issued a long lap penalty for that incident but, even before he had a chance to take it, Bagnaia was down his inside at Turn 12 on Lap 18.

Meanwhile, Marquez had been circulating more than four seconds clear of Quartararo for a number of laps.

There would be no fall for the Spaniard this time around, like there was last time MotoGP visited Texas, with #93 taking the chequered flag 4.679s up the road from #20.

Bagnaia was almost four seconds further back in third, and Rins inherited fourth from Martin when the latter took his long lap penalty on the final tour of COTA.

There was even greater final-lap drama for Miller and Mir, who made contact at Turn 15 when the Suzuki man went for a dive.

The hit took both wide and Enea Bastianini (Avintia Esponsorama Ducati) helped himself to sixth position, leaving Mir seventh and Miller eighth at the finish.

Miller was seen in what could best be described as a frank exchange with Mir on the cool down lap, and the incident is now under investigation. 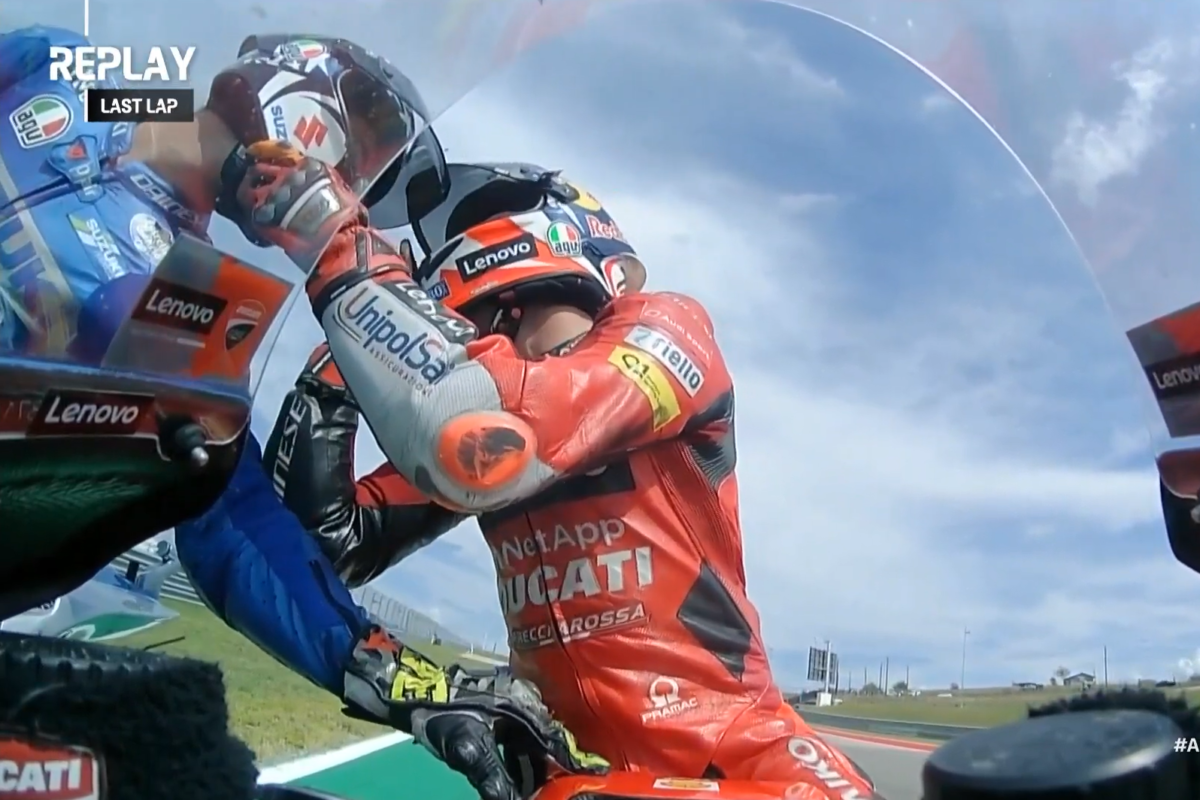 Binder and Pol Espargaro (Repsol Honda) rounded out the top 10.

Joining Nakagami as crashers during the race were Johann Zarco (Pramac Ducati), from ninth position on Lap 5, and Aleix Espargaro (Aprilia Gresini).

Round 16 takes the field back to Misano for the Emilia Romagna Grand Prix, on October 22-24.