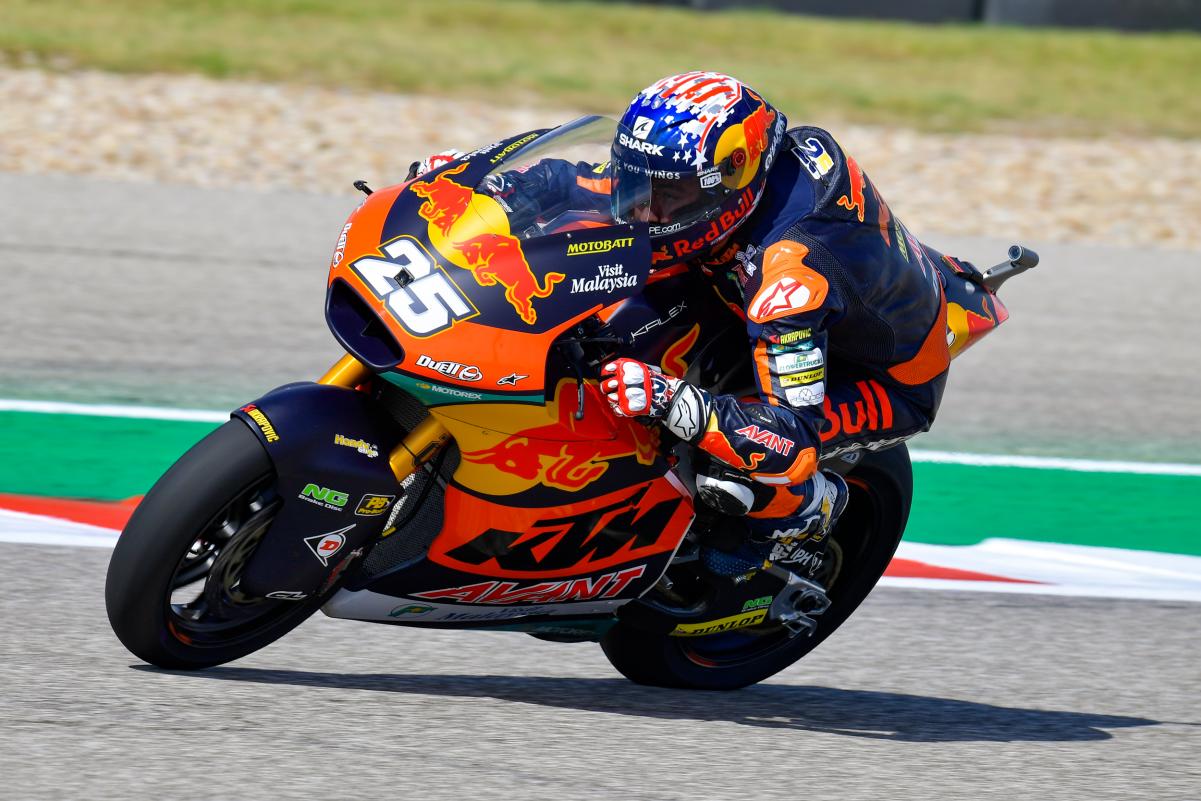 Raul Fernandez has taken a huge chunk out of Remy Gardner’s Moto2 championship lead after he won at the Circuit of The Americas and his Australian team-mate crashed out.

Gardner had fought back to second position in the Grand Prix of the Americas, about 1.5s behind the other Red Bull KTM Ajo entry, when he hit the deck on Lap 6.

Raul Fernandez went on to win and thus slash the margin at the top of the standings from 34 points to nine, with three races to go, while Fabio Di Giannantonio and Marco Bezzecchi completed the podium.

When the 18-lap race began, Cameron Beaubier (American Racing) came from Row 2 to briefly led the field into the first corner before he ran wide.

That allowed Raul Fernandez to get back ahead and it was Gardner emerging second, Di Giannantonio (Federal Oil Gresini) third, and Bezzecchi (Sky VR46) fourth, for the run down the hill, matching grid order.

Beaubier got back ahead of Bezzecchi at Turn 12, the end of the back straight, before Di Giannantonio slipstreamed past Gardner as Lap 1 became lap 2.

However, those manoeuvres triggered a serious battle for second which saw positions chop and change for a number of laps, allowing Raul Fernandez to skip away to an advantage of more than one second at the front of the field.

After that initial scrap over the minor placings, Di Giannantonio would be running in second position, from Gardner and Beaubier.

However, when the former of that trio ran well wide at Turn 15 on Lap 3, Gardner and Beaubier both went through, into second and third respectively.

Beaubier overtook Gardner into Turn 12 on Lap 4 but the Australian re-passed the American only a matter of corners later, while Di Giannantonio remained fourth.

On the following lap, Beaubier nearly lost the front end of Bike #6 at Turn 11, sending him wide and costing him positions to Di Giannantonio and Bezzecchi by the time they negotiated the Turn 12 left-hander off the back straight.

Gardner had drifted to 1.5s behind leader Raul Fernandez, albeit relatively secure in second position, when disaster struck on Lap 6.

The man on #87 arrived wide of the ideal line at Turn 15 and tucked the front of his KTM Ajo entry, sending him to the floor.

That gifted a margin of more than two seconds to Raul Fernandez, with Di Giannantonio running in second place, from Bezzecchi, Beaubier, and Tony Arbolino (Liqui-Moly Intact).

The latter two would soon be fighting with each other for fourth position, a battle which saw Arbolino run wide on Lap 10 at Turn 11 and Augusto Fernandez (Elf Marc VDS) therefore take up fifth spot.

Up the front, Raul Fernandez’s lead over Di Giannantonio ebbed and flowed between 1.5s and two seconds, while Augusto Fernandez overtook Beaubier for fourth on Lap 11.

With a lap to go, Raul Fernandez had eased back out to a 2.538s advantage, and would go on to collect 25 crucial championship points at the chequered flag.