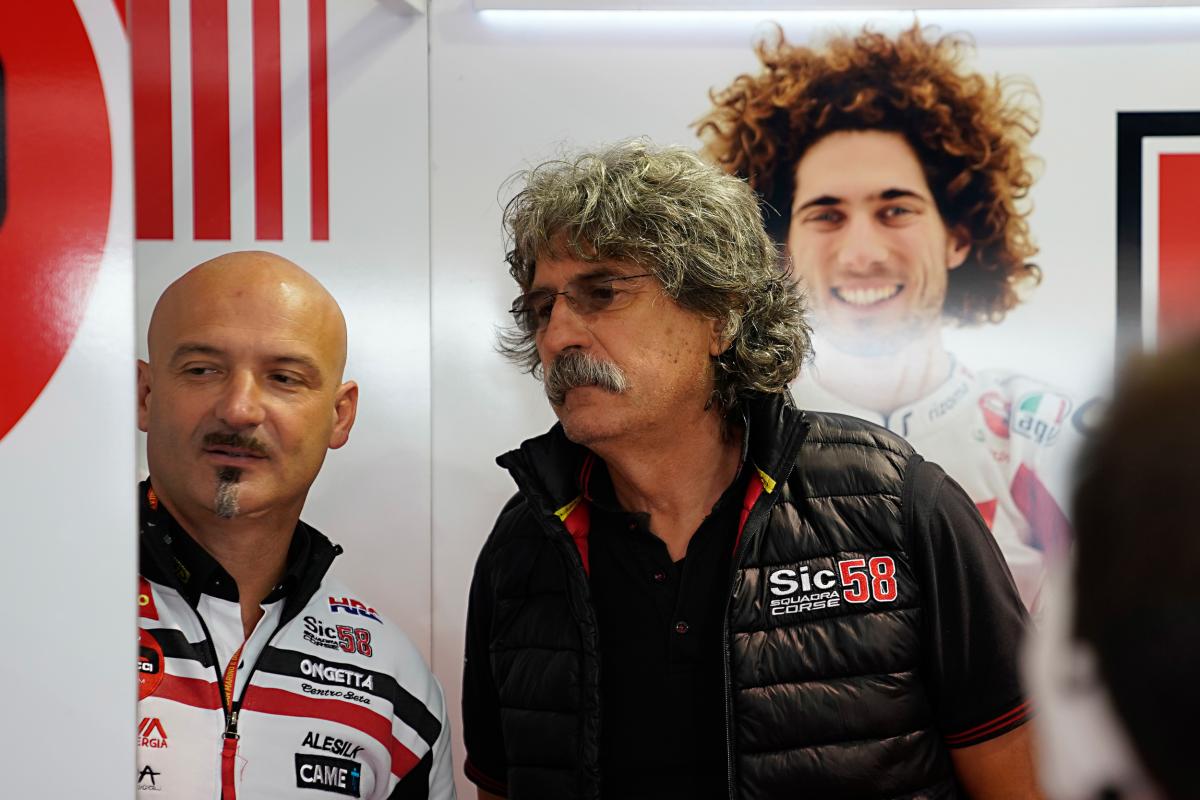 Paolo Simoncelli (foreground) stands in front of the Sic58 pit wall, which features a photograph of the late Marco. Picture: MotoGP.com

Paolo Simoncelli, father of the late Marco, believes that reducing the size of junior class grids is an “essential” safety measure after yet another teen motorcycle racing fatality.

Dean Berta Viñales, cousin of Maverick, lost his life in last weekend’s Supersport 300 World Championship round when he went down in a five-rider incident at Jerez.

The 15-year-old’s tragic death followed those of 14-year-old Hugo Millan in a European Talent Cup race in July and 19-year-old Jason Dupasquier in Moto3 in May.

While Dupasquier crashed in qualifying, his fatality and that of Millan occurred in similar circumstances, namely being struck by a following bike while/after falling.

Marco Simoncelli suffered the same fate in the 2011 Malaysian Grand Prix, when he was hit by Valentino Rossi and Colin Edwards, meaning three of the last four deaths in grand prix competition, Dupasquier’s included, have essentially been the same type of incident.

FIM Grand Prix Safety Officer Franco Uncini said after the Millan incident that there is currently no way to avoid deaths caused when a bike strikes a rider.

Nevertheless, Paolo Simoncelli, whose Sic58 Squadra Corse team competes in the Moto3 World Championship and other competitions, has a number of ideas which might reduce the chance of such incidents happening in the first place.

“Another important thing is the number of competitors,” he said in an interview on Italy’s Sky Sport.

“The guys want to get there at all costs and, when they close their visors, they don’t think about anything else.

“Having fewer starters could help a lot. It would be essential.”

The race in which Berta Viñales died was started by 42 riders, and that in which Millan lost his life by 38.

However, Paolo Simoncelli’s call is not new; in the aftermath of the Millan tragedy, he suggested then that the races should be split in two.

In his latest comments, he also called for better rider education and stricter enforcement of on-track standards.

“In my opinion, it’s a question of educating them, which stems from the minibikes, from when the guys get on a bike for the first time,” Simoncelli told Sky Sport.

“They don’t give the yellow flags importance. Penalties aren’t given in the right measure. They have to be tougher.

“There’s little education from the start, and the riders aren’t punished, or just for stupid things and not important things.”

Dorna Sports, which owns MotoGP and the Superbike World Championship, has reportedly set up a working group to address the spate of tragedies which have occurred this year.

Maverick Viñales flew home from the United States instead of staying on the contest this weekend’s Grand Prix of The Americas as he grieves the loss of his cousin.