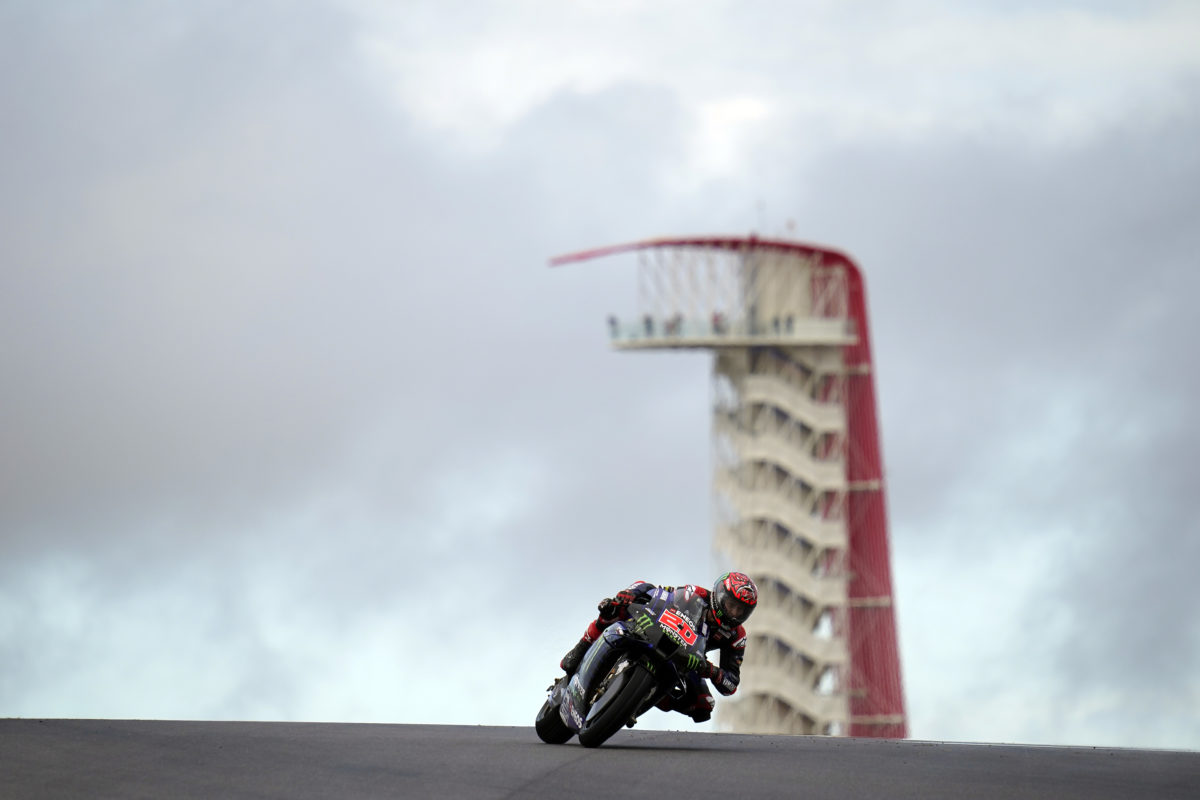 Fabio Quartararo in Friday practice at the Circuit of The Americas. Picture: Yamaha Factory Racing

MotoGP championship leader Fabio Quartararo has branded the Circuit of The Americas “a joke” for its bumpy track surface.

The Monster Energy Yamaha rider ended the opening day of the Grand Prix of the Americas third-fastest by virtue of his performance in the latter, dry practice session, having been only 15th-quickest when the track was wet.

However, Quartararo was far from happy about the state of the Texas circuit, which has become notorious for its bumps.

Several riders were seen having a particularly difficult time of Turn 10, the fast, downhill left-hand sweeper, and that was not the only trouble spot.

Said Quartararo after Friday practice, “It’s more or less a track that I used to race, to train with the motocross bike. But yeah, it’s much faster with the MotoGP bike so it’s really bad.

“We talked [with the Safety Commission] two years ago and said they need to resurface, but now it’s even worse. It’s just acceptable to race. I don’t know what to say; it is a joke.

“I mean, the track is not a MotoGP track for me. For me, it is a track to train.

The Frenchman’s view was far from isolated.

Repsol Honda’s Pol Espargaro, for example, complained not just about the bumps but also the cracks in the surface.

“It wasn’t at MotoGP level,” said the Spaniard after going fourth-fastest in Free Practice 2.

“It’s not even primarily about the bumps; there were cracks everywhere and you can see that the asphalt is very old and looks bad. The grip was also very bad.”

The Texas venue is one of a handful of tracks at which both MotoGP and Formula 1 race, with the Losail International Circuit confirmed earlier this week as joining that list.

While COTA is particularly bad for bumps, the downforce generated by modern F1 cars is also regarded as an issue for MotoGP given what it does to track surfaces, a point which Aleix Espargaro picked up on.

“I love Qatar, I love that circuit, and Formula 1 cars destroy everything due to the downforce, so let’s see.

“I’m happy for the Qatari people because they will be able to enjoy MotoGP and Formula 1, which is fantastic.

“But regarding the track, it’s very flat now, very good, and I hope that they will not destroy it too much.”

Free Practice 3 takes place in the early hours of Sunday morning (AEST), before Qualifying 1 from 06:10 AEDT.