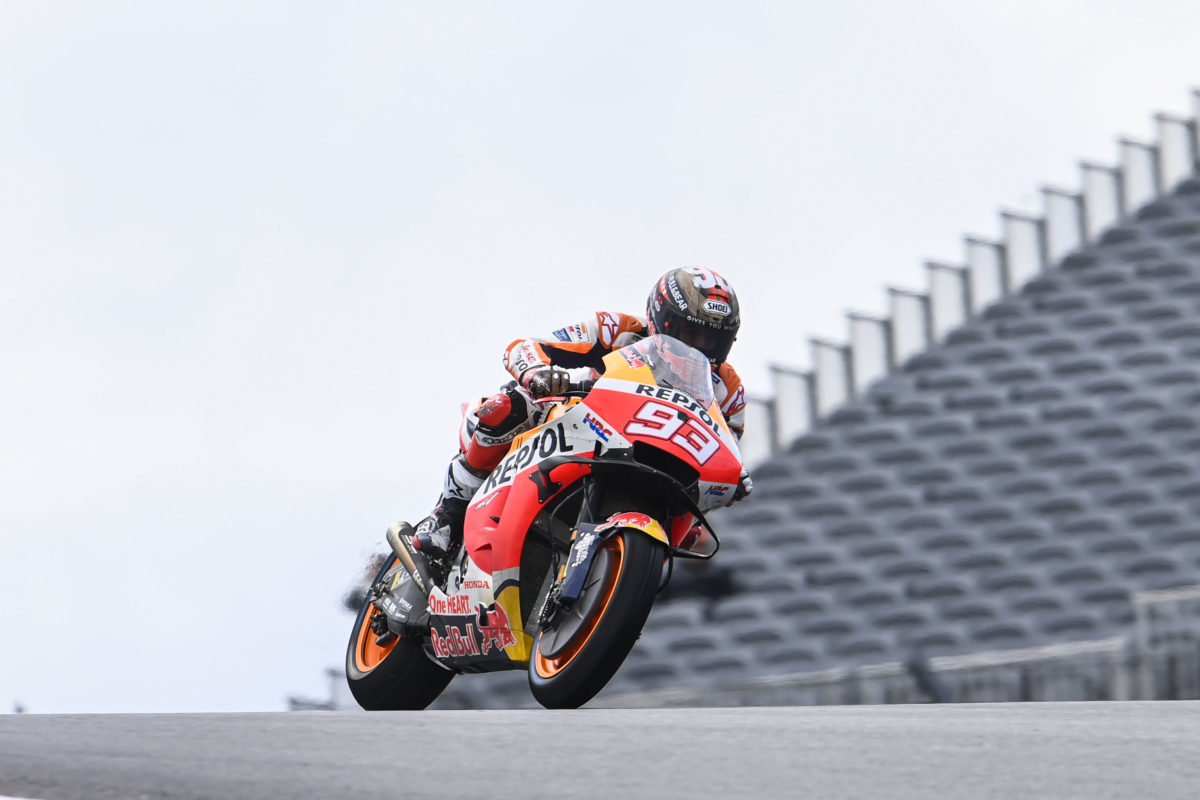 Marc Marquez has set the pace in both Friday practice sessions for MotoGP’s Grand Prix of the Americas while Jack Miller was second-fastest.

Marquez provisionally booked direct passage to Qualifying 2 at the Circuit of The Americas with a late 2:04.614s in the afternoon hit-out, before Miller clocked a 2:04.179s after the chequered flag.

The former had held sway for a long period in Free Practice 2, until the time attacks came in the final 10 minutes.

Miller’s Ducati Lenovo team-mate Francesco Bagnaia was first to knock the #93 Repsol Honda Team entry off top spot when he set a 2:04.793s on a new hard front Michelin and soft rear slick.

Takaaki Nakagami, with softs front and rear, beat that moments later with a 2:04.612s on his Idemitsu LCR Honda, and that was the benchmark until the final three minutes.

Then, championship leader Fabio Quartararo rode his Monster Energy Yamaha to a 2:04.366s, with a hard front/soft rear combination.

Marquez, with like rubber, had been shuffled all the way back to 11th by the time he laid down what would be the fastest lap of the session, just prior to the clock running out.

The Spaniard looked set to go faster again on his final lap but a small error put paid to that when he ran beyond track limits.

Miller, on the other hand, strung together a 2:04.179s with soft Michelins on both ends of the #43 Ducati, to elevate himself from sixth to second.

Last-start podium finisher Enea Bastianini (Avintia Esponsorama Ducati) snuck into 10th with the chequered flag out, meaning Red Bull KTM’s Brad Binder has to improve on Saturday morning if he is to skip Qualifying 1.

However, Free Practice 1 was run on a wet track after earlier showers, and there is the prospect of more rain at Austin, meaning the top 10 could effectively be locked in already.

Among those also hoping for dry conditions in Free Practice 3 will be Joan Mir (Suzuki Ecstar) in 13th, Miguel Oliveira (Red Bull KTM) in 18th, and Aleix Espargaro (Aprilia Gresini) in 19th, the latter two of whom crashed in quick succession inside the final five minutes.

Andrea Dovizioso could also be considered a chance for Q2 in just his second round for Petronas Yamaha SRT, having held 10th position until Marquez’s fastest lap and ending up 14th on the timesheet.

FP3 starts tomorrow at 00:55 AEST (just prior to clock change for some Australian states/territories).