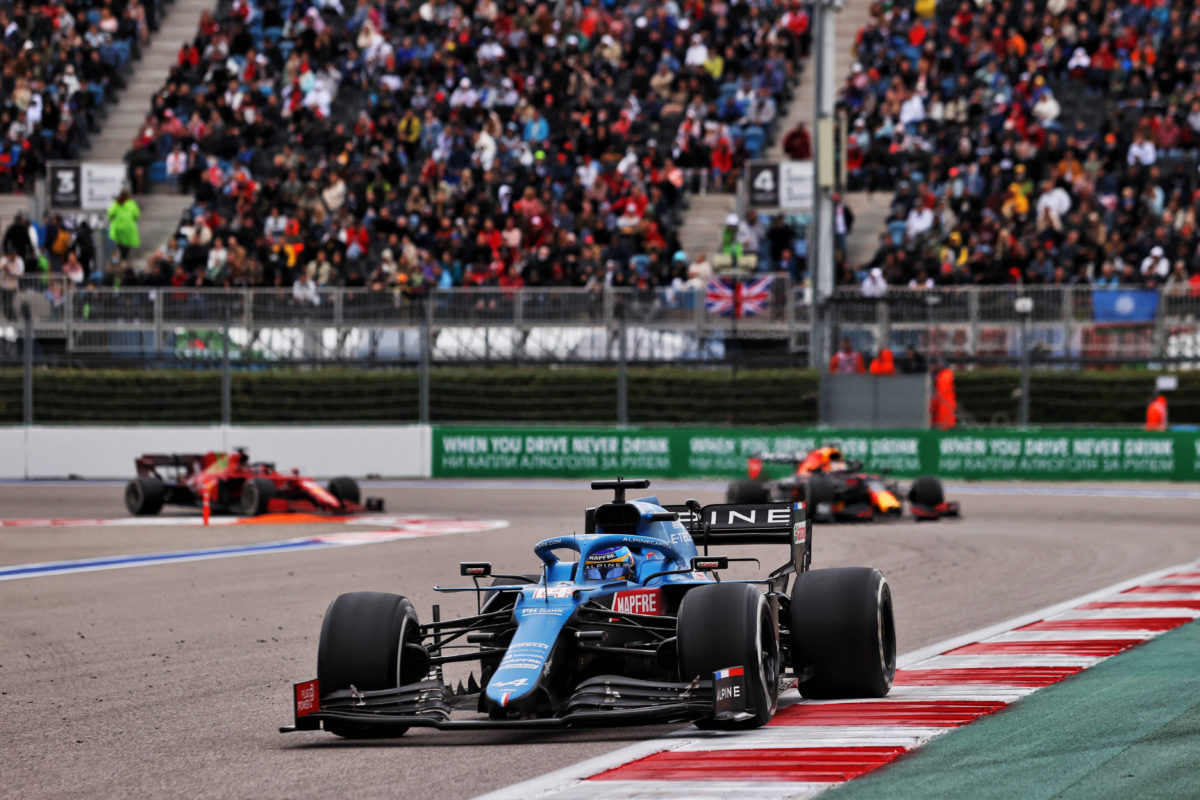 A podium appearance is an unrealistic target for Alpine for the balance of the 2021 Formula 1 season according to Fernando Alonso.

The Spaniard finished sixth in the Russian Grand Prix having run as high as third as rain hit the Sochi Autodrom.

Alonso was one of the last to stop for intermediate tyres, a decision which saw him slip behind Max Verstappen, Carlos Sainz, Daniel Ricciardo, and early-stopper Valtteri Bottas.

However, while a podium seemingly slipped through his fingers in Russia, the two-time world champion suggests Alpine is not otherwise a genuine podium contender.

“I think we are the fifth or sixth quickest team out there, so for us to get a podium we really need a very chaotic race,” he reasoned.

“Without that, I think by pure performance, I think top six, top seven I think is our maximum position.

“We did achieve that in a few races this year. I’m happy with the consistency.

“You need to be super lucky to get one podium – I was not so far, I don’t expect to be in the remaining races.

“If it comes obviously will be welcomed but I think we need to work on realistic expectations.”

Alonso’s comments come against the backdrop of victory for team-mate Esteban Ocon at the Hungarian Grand Prix.

It was a result achieved in a race which saw the front of the field skittled at the opening corner in two separate incidents, Ocon taking full advantage of the situation to claim a lead he never relinquished.

Yet team boss Marcin Budkowski agrees with Alonso, suggesting that in reality Alpine is not yet a contender for the podium in normal circumstances.

“We do our regular competitive analysis for the whole package, for the chassis, for the power unit, we look at the numbers after each race,” Budkowski explained.

“Obviously there are swings in competitiveness between teams, depending on the circuits.

“Some circuits better suit some car characteristics than others but I think, on average, yes, we are there or thereabouts, it’s the sixth quickest package meaning that we are in the fight to get into Q3 and fighting to score some points at every race, we’ve done that consistently.

“I was looking at the table the other day and was pleased to see that we’ve scored points at every single race except the first one this year, so it’s a good run.

Alpine currently sits fifth in the constructors’ championship, the same position the squad achieved last season (when known as Renault).

It enjoys a 19-point buffer over AlphaTauri in sixth, though its 103-point tally is 113.5 points shy of fourth-placed Ferrari.