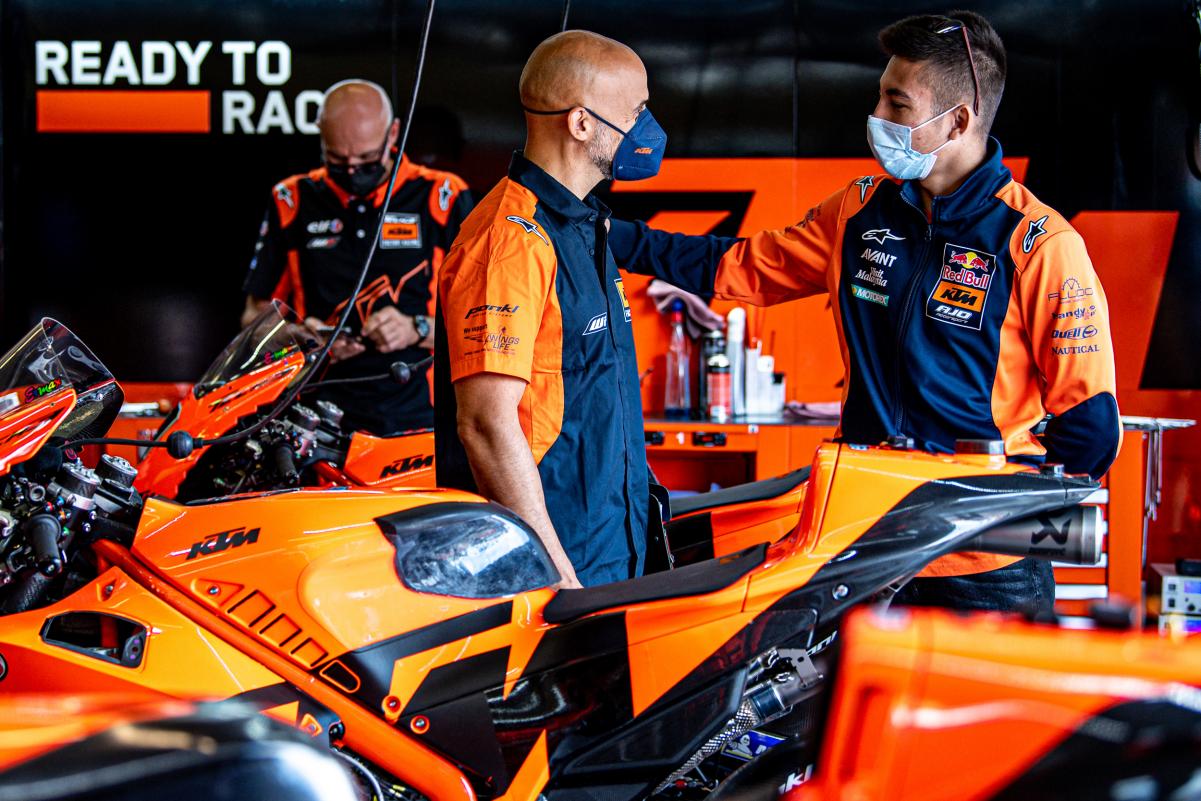 Tech3 boss Herve Poncharal has elaborated on exactly what Esteban Garcia will do when he joins the team to work with MotoGP rookies Remy Gardner and Raul Fernandez next year.

KTM has chosen to promote both Gardner and Fernandez from Red Bull KTM Ajo’s Moto2 team to its satellite MotoGP squad next year, a not unsurprising development given how often it recruits from within its talent structure.

However, the Austrian marque has also signed up Garcia, who became available when Yamaha opted to replace him as Maverick Viñales’ crew chief in its ultimately unsuccessful bid earlier this year to revive the fortunes of ‘Top Gun’.

Garcia and Viñales shared the 2013 Moto3 title and their latest stint together immediately followed the former’s spell as crew chief to Bradley Smith at KTM’s factory team.

It has now been explained that the Spaniard will be designated as Tech3’s technical director, freeing up Gardner’s and Fernandez’s respective crew chiefs to concentrate on their own bikes.

“Already this year, we are the team who has got the factory colours, so this is an honour for us,” Poncharal, whose MotoGP operation is officially known as ‘Tech3 KTM Factory Racing’, told the championship’s official website.

“But, they wanted to really put the two teams on the same level.

“To liaise, and to coordinate even better while the crew chiefs are focused on their job looking after their rider and their settings for the next session, Esteban will be the technical director.

“[He will] be in charge of overseeing what’s happening, and liaising with the factory [team], with the engineers, explain more in detail and in more time than the crew chiefs, because from FP1 to FP2, FP2 to FP3, you don’t have so much time.

“A racing weekend is very tight schedule and he will have a bit more time; that will be his main mission.”

However, Garcia also knows Gardner and Fernandez well already, and will be a sounding board for them in their first season in the top flight.

“Also, the very good thing is, not only he knows KTM very well, but he also knows Remy and Raul very well,” added Poncharal.

“He saw them when they were kids, starting to race.

“Both Remy and Raul have a big trust in him, and I think if ever there are some doubts, [if] they need to talk to somebody, Esteban will be there – as well as the crew chief, as well as me, as well as everybody – but I think he’s going to have a key role next year.”

According to Poncharal, the appointment is another sign of the commitment to his team of KTM, which is the party to whom Garcia is contracted.

“KTM is a company that is so much involved in racing,” noted the Frenchman.

“Their slogan is ‘Ready to race’ but this is not a fake slogan; this is a real thing.

“Clearly, both Remy and Raul this year are doing an outstanding championship. What they do, I think has never happened before, you know, so much one-two [finishing].

“Maybe we have to go back to the 250[cc] years of [Olivier] Jacque and [Shinya] Nakano [2000], who were dominating the championship a bit like Remy and Raul are doing at the moment.

“When they [Gardner, Fernandez] decided to move up to the MotoGP class, with the support of Stefan Pierer and the whole KTM factory, plus of course the Red Bull sponsor behind them, they wanted to be sure, and we wanted to be sure, that they got the right support.

“And Stefan Pierer, the KTM CEO, always made it clear, ‘You don’t have a factory team with two bikes and a satellite operation with two bikes; you have four full factory bikes.’”

Gardner and Fernandez rode an RC16 for the first time in last week’s Misano MotoGP test.

The former leads the latter by 34 championship points ahead of this weekend’s Grand Prix of the Americas, the fourth-last round of the season.