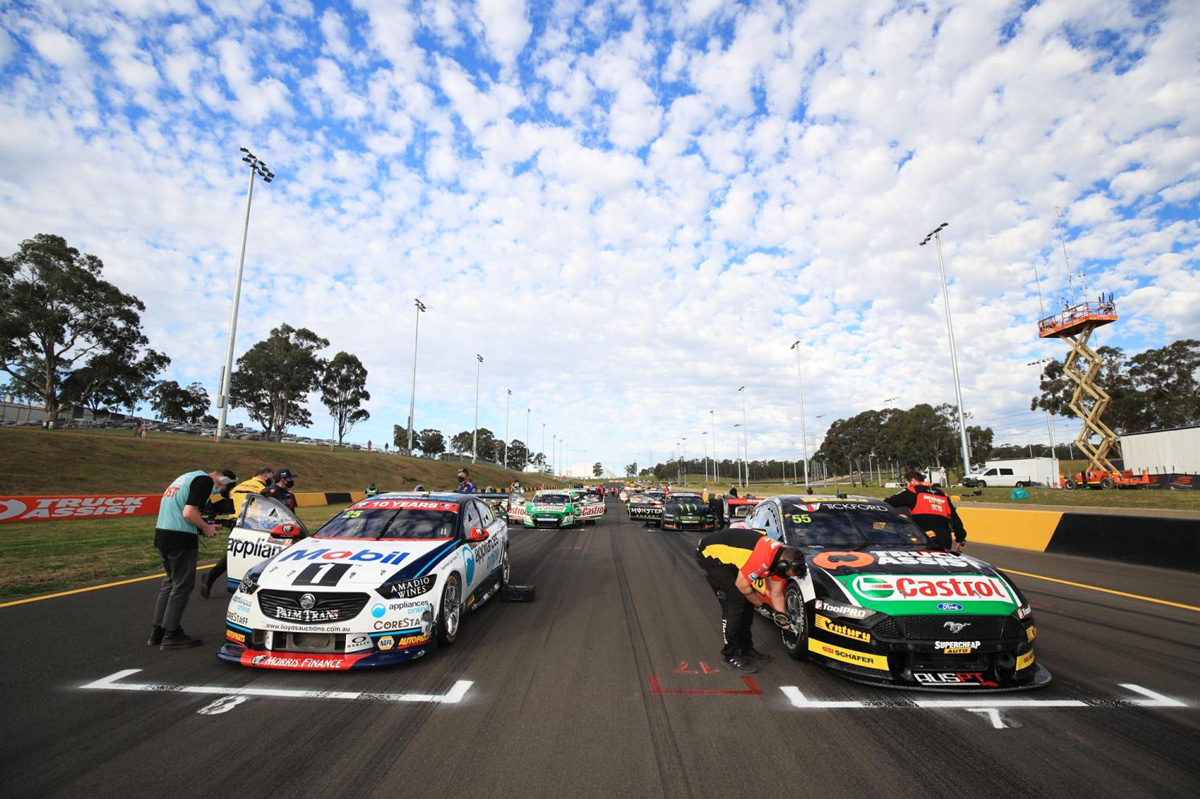 The Repco Supercars Championship is set to host four back-to-back events at the Eastern Creek circuit across October 29-31, November 6-7, November 13-14, and November 19-21.

Unlike other circuits, Supercars has the luxury of flexibility when it comes to circuit configurations at Sydney Motorsport Park.

Add to that, Supercars has three compounds with its hard, soft, and newly built super soft Dunlop tyres.

The last time Supercars hosted a double-header at Sydney Motorsport Park it differentiated the events by time of day and with tyre compounds.

Its first event saw three races with soft tyres while the second event took in three races, one under lights, and a mix of soft and hard compound tyres.

For Supercars CEO Sean Seamer, creating some distinction between events will be at the forefront of his mind when the Supercars Commission meets this Thursday.

“We had to abort Queensland and just focus on what we knew was going to be achievable that would give us maximum certainty but also maximum opportunity to reconnect with fans,” Seamer told select media including Speedcafe.com.

“Whilst it might seem a little bit counterintuitive based on how the world is right now, by the time you fast forward to the end of October and then end of November in New South Wales, it’s going to be a very different world that we’re living in.

“So, not an easy decision to have to be doing four rounds in the same facility but it gives us plenty of opportunity to innovate in terms of having the lights there, different track configurations, and it is in a major metropolitan area being Sydney so that will be helpful [with] reconnecting with fans and partners after a long layoff.”

“I guess we will all have to wait and see until a little bit later this week but what I can say from speaking to the team representatives is that nothing is off the table and I think collectively we need to differentiate these events and put on a really good show, so let’s see,” he explained.

“I think we proved last year that we are prepared to look outside the box and certainly that produced some of the best racing we have seen at Sydney Motorsport Park in a long time.

“We’re very fortunate with the facility, not just with the lighting and the track configurations but that track produces really good degradation and therefore, even for the purists, really good racing as well.

“So it will be interesting to see but from what I can tell you right now, there is a high degree of willingness to do what we have got to do to put on a good show.”

Last year Supercars solely raced on the customary ‘Gardner’ layout, although the shorter Druitt configuration has long been in the frame.

Seamer wouldn’t rule out even using the longest layout, Brabham, which adds 800 metres to the Gardner circuit.

“It’s something that we looked at last year and I think we’ll have to reconsider that as part of our options on Thursday [at the next Supercars Commission meeting],” said Seamer.

“It would be premature for me to call right now exactly what track configurations are likely to look like. The Commission is considering everything and they’ll work through that… but at this stage we’re working on the basis that there’s no bad ideas at this point in time.

“We have got to look at everything. It’s going to be great to come back racing and be back with a night race at Sydney Motorsport Park, but like I say, we have got to make sure that we’re putting on a good show and entertaining on- and off-track in the subsequent three weekends and that will filter through not just the formats but ticketing packages, experiences over the course of those four events.”

Outside of formats and tyres, support categories are also a consideration.

Already, Supercars has confirmed the Dunlop Super2 Series and VHT S5000 Australian Drivers’ Championship will feature at the last of the four events.

Seamer downplayed the likelihood that other Australian Racing Group categories will feature on the support card.

Drifting, drags, and time attack were among the disciplines were also mentioned by Seamer.

The category boss also indicated he’d like to have the Australian Superbike Championship and Stadium Super Trucks feature.