Scott McLaughlin wraps up his maiden IndyCar Series season after finishing 11th in the Long Beach finale – all in his Hired Gun exclusive column, presented by Grove Hire.

It’s gone in the blink of an eye.

It just feels like yesterday I was making the mad rush from Mount Panorama to get to Sydney to get to the States… and now nearly 12 months to the week – just like that, my rookie IndyCar season is done.

I had a few beers last night with the team and with Karly. Just to toast our accomplishment.

At the end of the day my goal this season was to win the Rookie of the Year – and I was able to tick that box both for the Indy 500 and for the championship.

I put pressure on myself to do it – probably too much pressure – but at the end of the day we took part in three more races than Romain Grosjean, so I needed to make sure I won it.

And now that we have, I have to be honest – it’s bloody satisfying.

These are such unique beasts – like nothing I’ve ever sat in, let alone race – but we’ve made it through year #1 relatively unscathed.

It’s a seriously super competitive championship – every lap, every session, every race – it’s race to the absolute maximum. Which I love – but it’s draining. And exhilarating. I hope that makes sense.

In the end, we got some great results, some surprising results, and we’ve had some moments we wish were a little better.

And that sort of encapsulated our final weekend on the streets of Long Beach in Los Angeles.

Firstly – it’s a seriously cool street track and a fantastic event with a party atmosphere that was awesome (another one for your bucket list whenever it is we can travel abroad again…!)

So I was desperate this last qualifying session to make the final 12 – which we missed by a spot.

That’s my immediate goal next year to improve on – to qualify BETTER. It’s tangible and something I can nail.

I have to improve across the board – but qualifying will definitely be my focus. 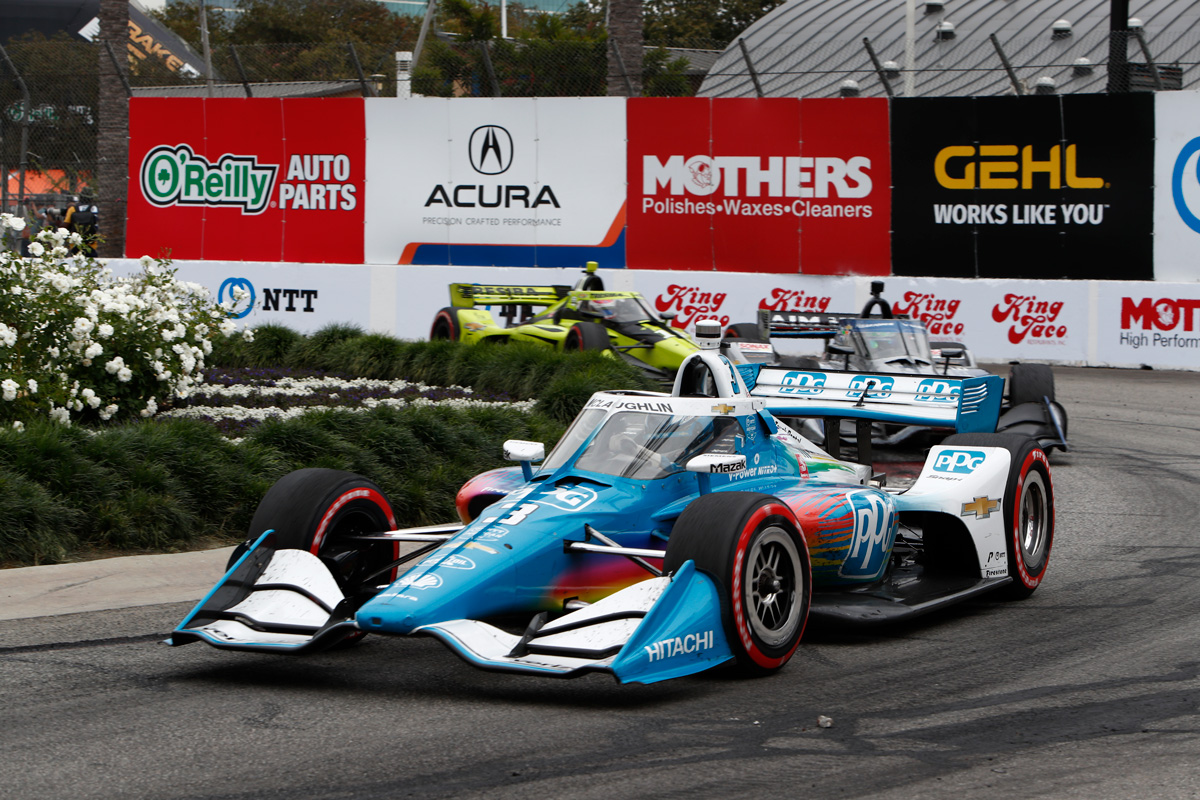 We finished the final race of the year in 11th – just outside the top 10 which I was so keen to finish inside. We ran as high as fourth in a really entertaining race – it was manic and push, push, push all day.

So if you read this I know you’d know me well enough to know that 11th isn’t anywhere near where I want to be finishing.

But they are small steps we’re taking with the goal to take much bigger strides – and I hope they can come as soon as next year.

We finish our rookie season 14th overall in the championship – again, I would have dearly loved to be higher. But for the moment, it is what it is.

We’ll get better – in that I can promise.

But still, we’re the first Penske driver to ever be crowned Rookie of the Year – and in doing so beat a star from Formula 1 in Romain, and the GOAT in NASCAR in Jimmie Johnson, so I’ll take that.

Both Romain and Jimmie have become really close friends – it still freaks me out when Jimmie texts me, it’s awesome.

And I’ll let you in on a secret – Jimmie and I swapped helmets on the weekend, and I’ll cherish his lid in my man cave for life!

So to the highlights of year one.

Definitely Texas – my first weekend on a speedway and I stuck it on the podium – that was a surprise and a statement all rolled into one.

Indianapolis was as awesome as I had dreamt it might be – and we were on for a seriously cracking result in the 500 until my error in the pits, which I’m still kicking myself over.

We must make amends on May 29 next year.

So we’ll take a bit of a breather before a bunch of testing in the next month prior to winter rolling in here in the States.

I’m excited for what’s to come in 2022 – and already can’t wait for the new season to roll around.

I appreciate all of the support I get from home – and love having you on the journey with me.