Ricciardo: ‘My start was kinda too good!’

Ricciardo: ‘My start was kinda too good!’ 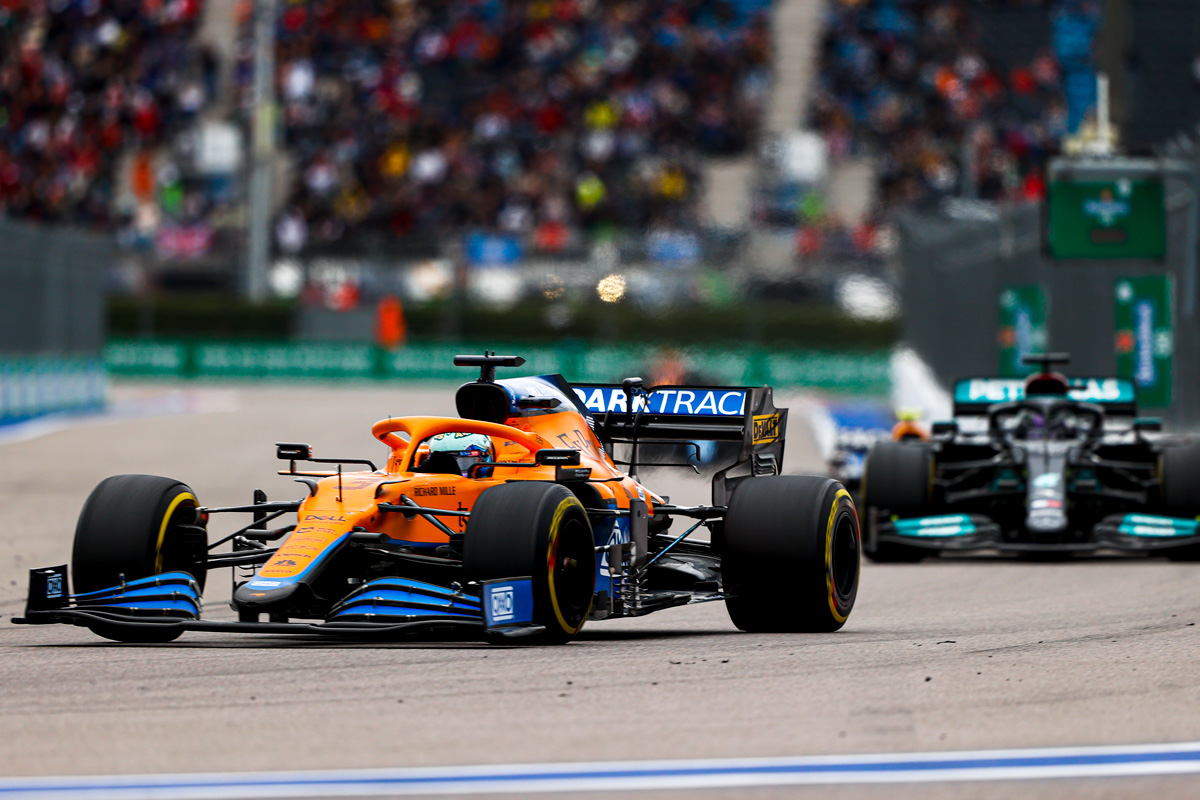 Daniel Ricciardo ahead of Lewis Hamilton at the Russian Grand Prix

For the second straight Formula 1 grand prix, Daniel Ricciardo made a blistering start – only this time it worked against him.

Whereas Ricciardo snatched the lead into Turn 1 at Monza to set up a shock victory, he was unrewarded by his strong getaway in Sochi.

Starting fifth, the McLaren driver launched well to immediately pass Lewis Hamilton for fourth and looked to challenge Carlos Sainz and George Russell ahead in the long run to the first corner.

Instead, Ricciardo wound up seventh, with slipstreams and the early hustle and bustle shuffling him back.

The Australian did work his way forward, repassing Hamilton and holding the seven-time world champion at bay until ditching his medium compound tyres on Lap 22.

As the race approached the latter stages, Ricciardo ran inside the top five before late rain mixed things up – the 32-year-old pitting for intermediate tyres seven laps from the end and recovering to a fourth-place finish.

“Sometimes this track doesn’t provide that, but this weekend it did with both quali and the race. There was a lot that happened.

“I think my start was kinda too good! I had to pull out and then pull back in, so we lost a few positions there, but then made a few back over the first lap.

“So, there were some good moments. I defended pretty well in the first stint, then in the second stint made a few good passes, but then struggled towards the end of that hard tyre.

“Then the rain came, and that’s when it all turned on its head.

“The in-lap was sketchy. I think Carlos went off in Turn 7, then me, then Max [Verstappen]. I think Max saw both of us and just went off less and was able to pass there.

“Then we got out on the inters and I could see Carlos ahead – the last couple of laps I felt like I was bringing him in a bit, but it was a little too late.

“I just missed the podium, but P4 is a solid result.”

Ricciardo now has a comfortable hold on eighth in the championship, having scored more points than any driver across the past two events.

“Good points and, I think, for those tricky conditions, it’s always nice just to get out with your nose clean,” added Ricciardo.

“There are definitely some positives and personally still a few things to work on, so we’ll keep our head down.”

As for his pole-sitting team-mate Lando Norris, it was a case of heartbreak with a maiden victory slipping through his grasp in the dying laps as Lewis Hamilton jagged his 100th grand prix win.

Next on the F1 calendar is the Turkish Grand Prix across October 8-10.