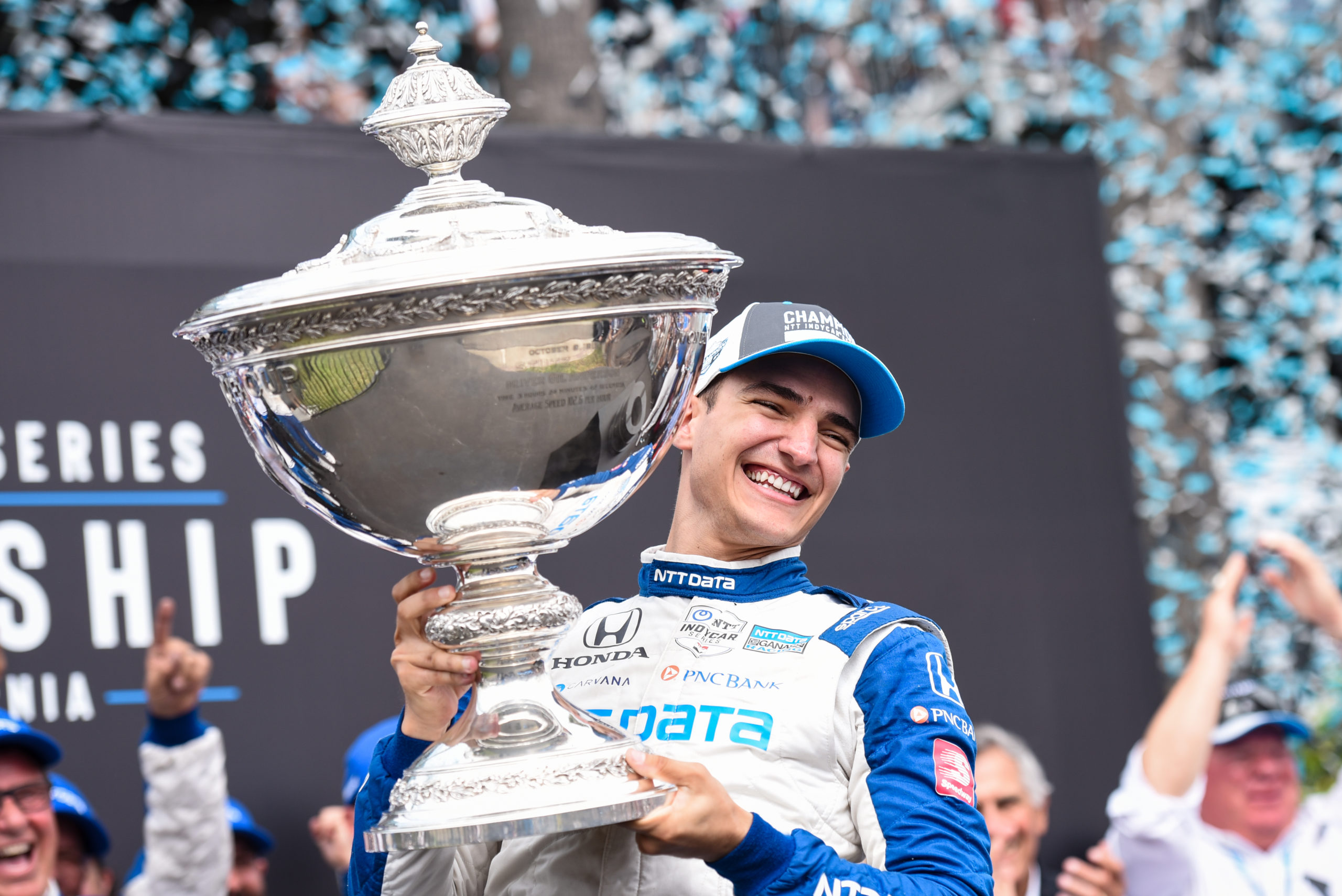 A fourth place finish at the Acura Grand Prix of Long Beach secured Palou the title in what was a dramatic conclusion to the season.

At 24 years old, Palou becomes the first driver from Spain to win the IndyCar Series.

“What a year. What a season. This team is amazing. I don’t know what to say. I’m super proud to be part of Chip Ganassi Racing. All of our partners. I’m super happy.

“I can’t thank enough everybody that made this possible, Chip Ganassi especially. Yeah, my family, everybody, management team, amazing.

“I’m super proud to be a champion and the opportunity that these guys gave me, so we’ll keep it going.

“Those were good moments where I was just feeling like I was living my dream, now I’m doing it, so it’s even more special.

“I think what got me here, part of everybody that got me through all the junior categories is the team, the team got me here. My team-mates were amazing. I’m super happy.

“Dream completed. Let’s get another one now.” 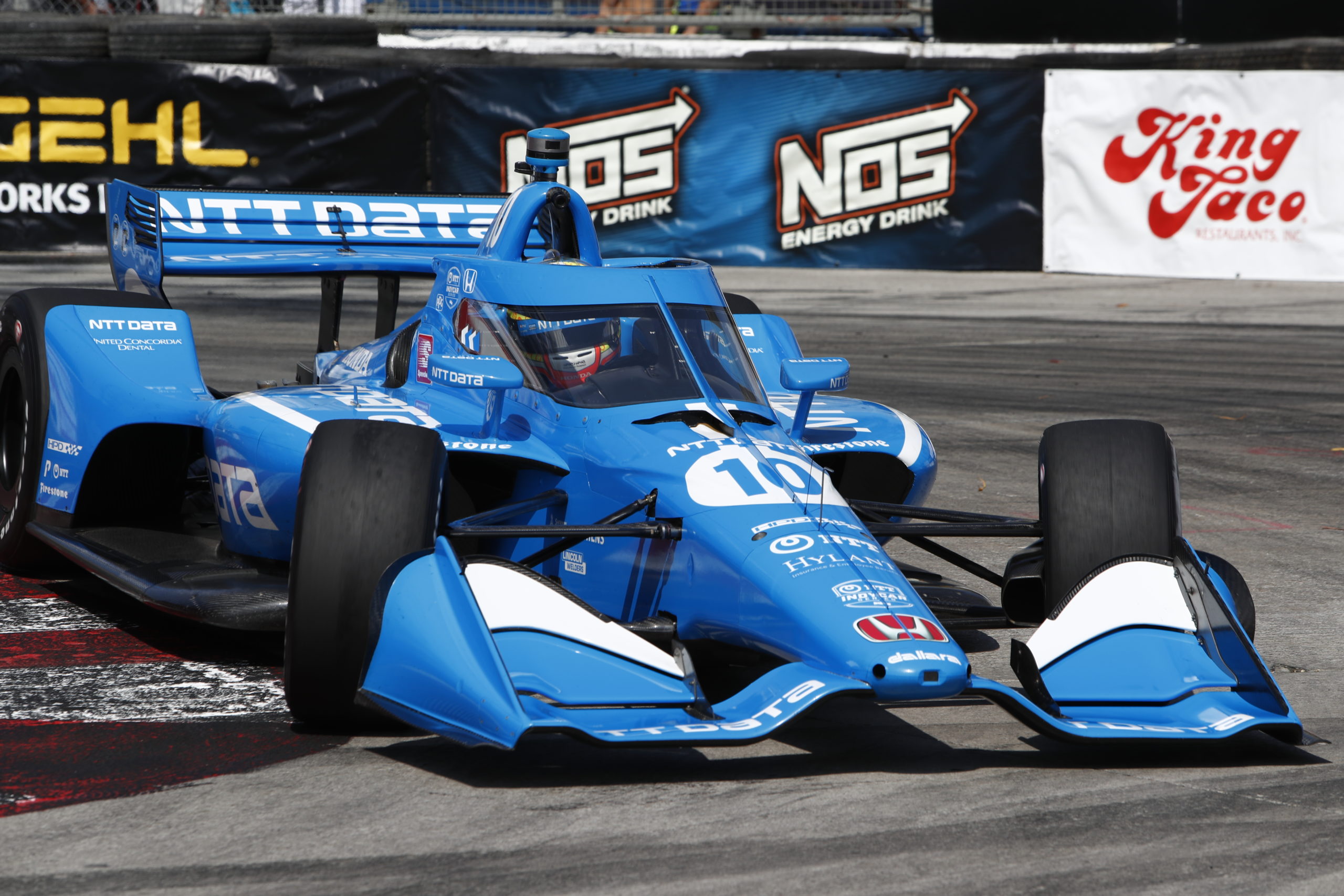 It was a typically awkward rolling start to the race, as rows four and beyond were left behind coming to the green flag.

It was a fairly even start heading into Turn 1, though the inside line allowed Newgarden to prevail over Dixon.

As he poked his nose down the inside at the hairpin, he clipped the back of O’Ward and sent the Mexican into a spin.

Chaos ensued as Colton Herta launched over the back of his Andretti Autosport team-mate Ryan Hunter-Reay.

Fortunately, the field managed to make it through, though Hunter-Reay received a puncture in the melee.

O’Ward, who dropped to the tail of the field, was given a reprieve as the yellow flag was drawn for Sebastien Bourdais (A. J. Foyt Enterprises) who had ground to a halt.

Despite picking up damage in the first lap kerfuffle, Herta was the hardcharger early on from 14th to sixth by Lap 15.

Drama struck on Lap 18 for O’Ward who slowed on the front straight with a broken driveshaft.

With a yellow flag looming, the leaders made their way to the pit lane. Come Lap 21, the Safety Car was deployed for O’Ward who parked up at pit exit.

Having not taken the opportunity to pit, Castroneves led the field to green on Lap 25 ahead of Rosenqvist, Takuma Sato (Rahal Letterman Lanigan Racing), Scott McLaughlin (Team Penske), Hunter-Reay, and Will Power (Team Penske).

Newgarden was the first of those cars to have pitted in 12th.

It wasn’t long before the yellow flag flew again as Marcus Ericsson (Chip Ganassi Racing) buried his car in the tyre wall at Turn 1 come Lap 26.

Most of those who hadn’t pitted in the first round of stops opted to come into the lane at the second time of asking, except for Castroneves and Rahal. That quickly vaulted Newgarden to third.

Herta was the biggest mover in that sequence having been the first to pit, moving his way effectively to third behind Newgarden and Dixon.

Herta continued his charge, passing Dixon on the restart at Turn 6 and soon enough was past Newgarden at Turn 9 to take the projected lead.

Herta wasted no time stretching his legs, edging out to a four-second lead over Newgarden.

The second round of pit stops began in earnest with a little over 40 laps to go as Herta pitted from the lead with a mammoth eight-second lead.

Grosjean’s race came undone when he slid out of Turn 8 and bent the left rear corner of his car, forcing him to the pit lane. That put paid to his Rookie of the Year title aspirations, handing the win to McLaughlin.

Drama struck again with 24 laps to go as Oliver Askew (Rahal Letterman Lanigan Racing) and Conor Daly (Ed Carpenter Racing) made contact at Turn 9, resulting in Askew nosediving the wall and Daly stopping in the run-off.

That saw Herta’s 12-second lead evaporate, bringing Newgarden back into the frame.

Herta looked to have the final stanza of the race under control, though his tyres began to fade in the closing stages, bringing Newgarden back into the frame.

Ultimately, Herta would hold on despite a late challenge from Newgarden. Dixon would cross the line in third ahead of team-mate Palou who in doing so secured the title.