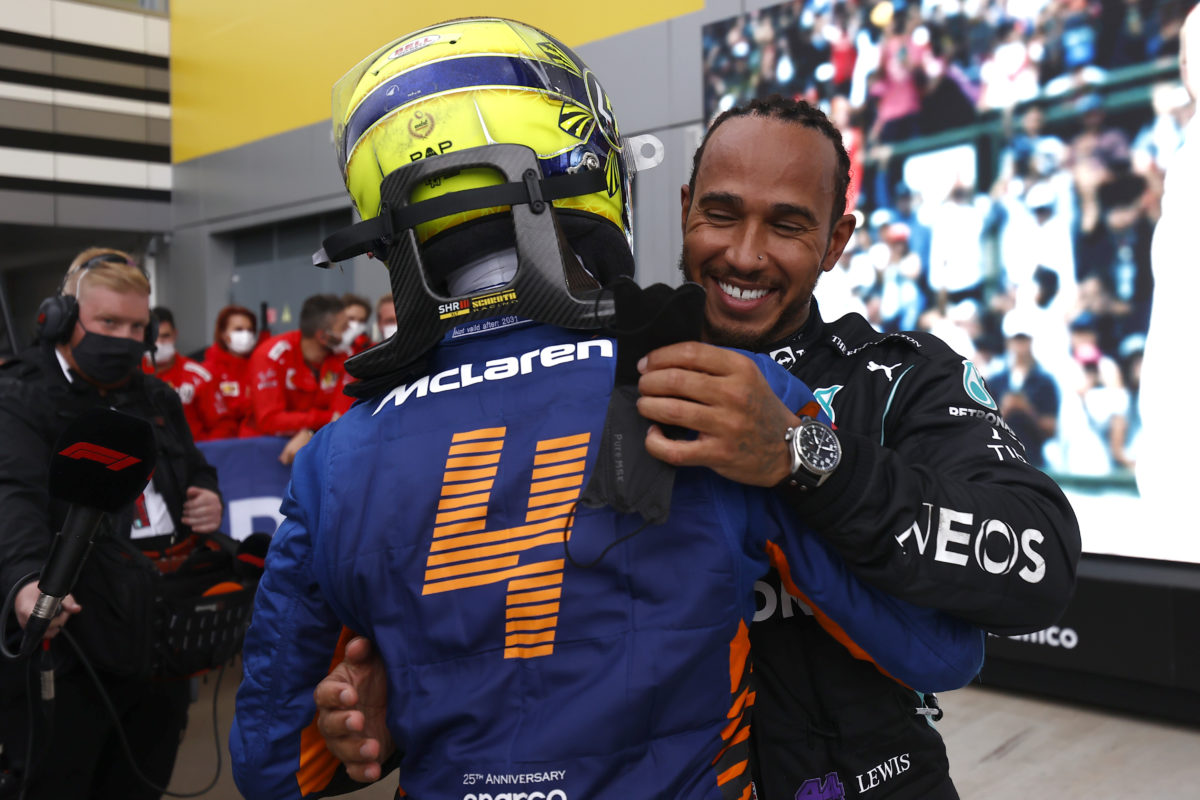 A nail-biting finale was resolved in Hamilton’s favour, the seven-time champion chalking up his 100th F1 win.

Having risen through the field after a sluggish start, the Brit trailed Norris inside the final 10 laps when the skies opened.

The McLaren driver gambled and remained on slick tyres, a decision that saw him skate off the road to cede the win just three laps from the flag.

“Lando did such an amazing job,” Hamilton said.

“He had incredible pace he’s doing such a great job for McLaren.

“It’s very bittersweet obviously to see my old team ahead, them doing so well – obviously they won the last race.

Hamilton pitted with five laps remaining, a lap after the likes of Max Verstappen and Carlos Sainz, and two laps after early adopter George Russell.

“The team made a great call right at the end,” he said.

“I didn’t want to let Lando go, and of course I didn’t know what the weather was doing, but I’m incredibly, incredibly grateful to all these men and women that are here and back in the factory because, well 100 [race wins]!”

It’s Hamilton’s first win since the British Grand Prix and makes him the first man in the sport’s history to achieve 100 wins.

He was made to work for it, slipping down the order from fourth on the grid to end the opening lap just seventh.

The opening stint was spent behind Daniel Ricciardo, unable to find a way through, rising to second before his own stop on Lap 26.

Once the pit sequence had completed, Hamilton found himself second, some eight seconds away from Norris in the lead.

He chased down the lead McLaren only for his charge to stall before the rain fell in the closing laps.

“Then the rain came and it was very opportunistic.

“Going to bed last night obviously not the happiest with the job that I did yesterday,” Hamilton added of his qualifying effort which left him fourthd.

“I was determined to do the best job I could and it was tough.

“Lost a lot of ground at the start just trying to stay out of trouble and obviously Max must have done a really great job to come up to second.”

Hamilton now holds a two point advantage at the top of the drivers’ championship over Verstappen, while Mercedes’ lead has extended to 33 points in the constructors’ fight with Red Bull.

Formula 1 next heads to Istanbul Park for the Turkish Grand Prix on October 8-10.