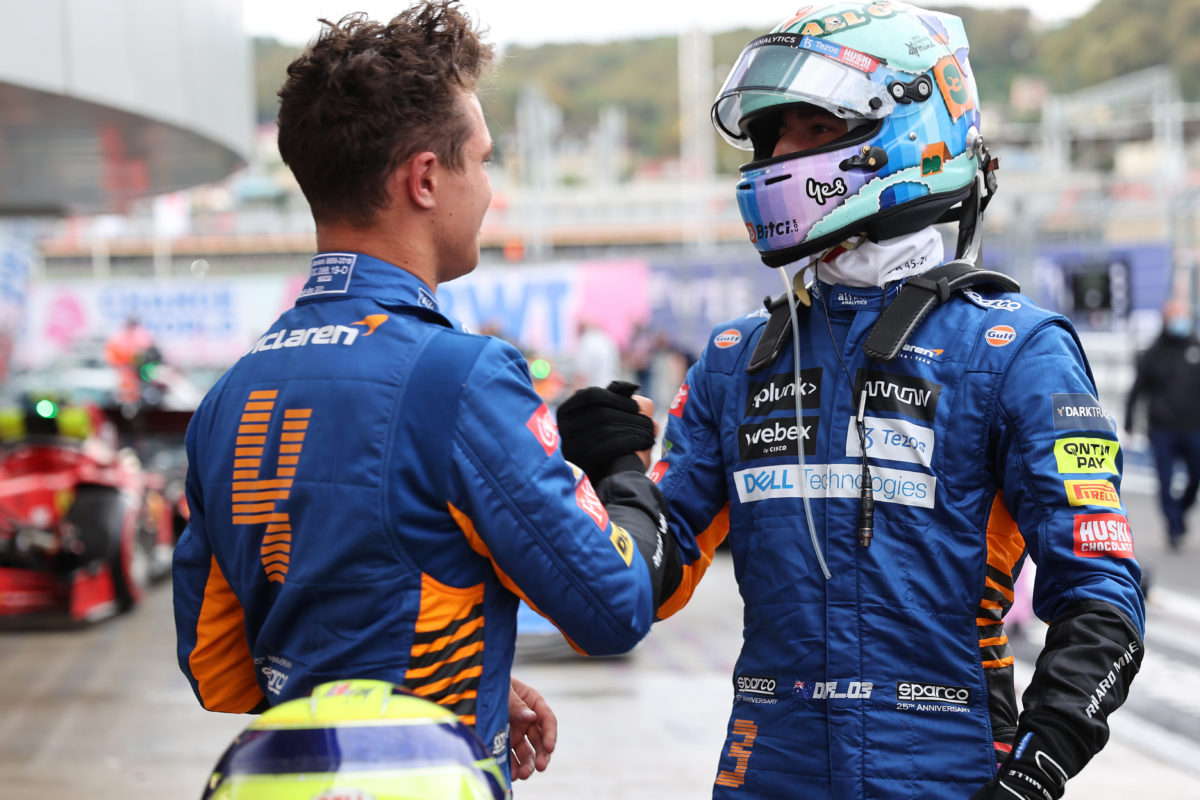 It’s Norris’ first F1 pole, and the first for the team since the 2012 Brazilian Grand Prix.

Qualifying in Russia saw drivers faced with a drying track, the crossover to slicks coming midway through the third segment of the session.

Norris and Ricciardo were among the first to make the switch, the latter going on to post the fifth best time while the former secured pole.

“It’s a big moment – you only get your first pole once, so it’s a big day for him.

“I think in in these conditions as well it’s impressive,” he added.

“He’s obviously got great car control and I think he’s shown it all year.

“Even last year, of course I wasn’t in the team, but he obviously had some very strong results last year, so it’s not that this is like a flash in the pan year.

“I think he’s certainly grown and developed really well with the car [and] with the team.”

Norris’ performance comes off the back of a second place, behind Ricciardo, at the Italian Grand Prix.

It was a strong performance, though one he was somewhat downbeat on heading into this weekend.

“I don’t think I have to make up for anything in in Monza,” Norris reasoned when asked if the Russian GP was an opportunity to make up for the disappointment of finishing second to Ricciardo last time out.

“I was there where I deserved to be and where I was.

“I don’t think I have anything to make up for, but of course I have that opportunity to try and achieve something that I didn’t manage to achieve in Italy.

“I’m definitely going to be going for it.

“Of course, I think in every situation you do, especially when I have the situation we’re going to have tomorrow with a Ferrari behind me and a Williams, and that bit of a buffer,” he continued.

“So we have a good chance, and if I [win, it will be] sweeter because of finishing P2 in Monza, but I don’t think my approach or my mentality has changed because of that.”

With Lewis Hamilton set to start fourth in a Mercedes that has been the class of the field in dry running, it’s a tall order for the third-year McLaren driver.

“I believe we can [win], there’s an opportunity for it, but Mercedes are still as quick as they have been all season.

“It’s probably one of their best circuits of the whole season so it’s going be a good challenge, but I’m up for it.”

The Russian Grand Prix gets underway at 22:00 AEST tonight.