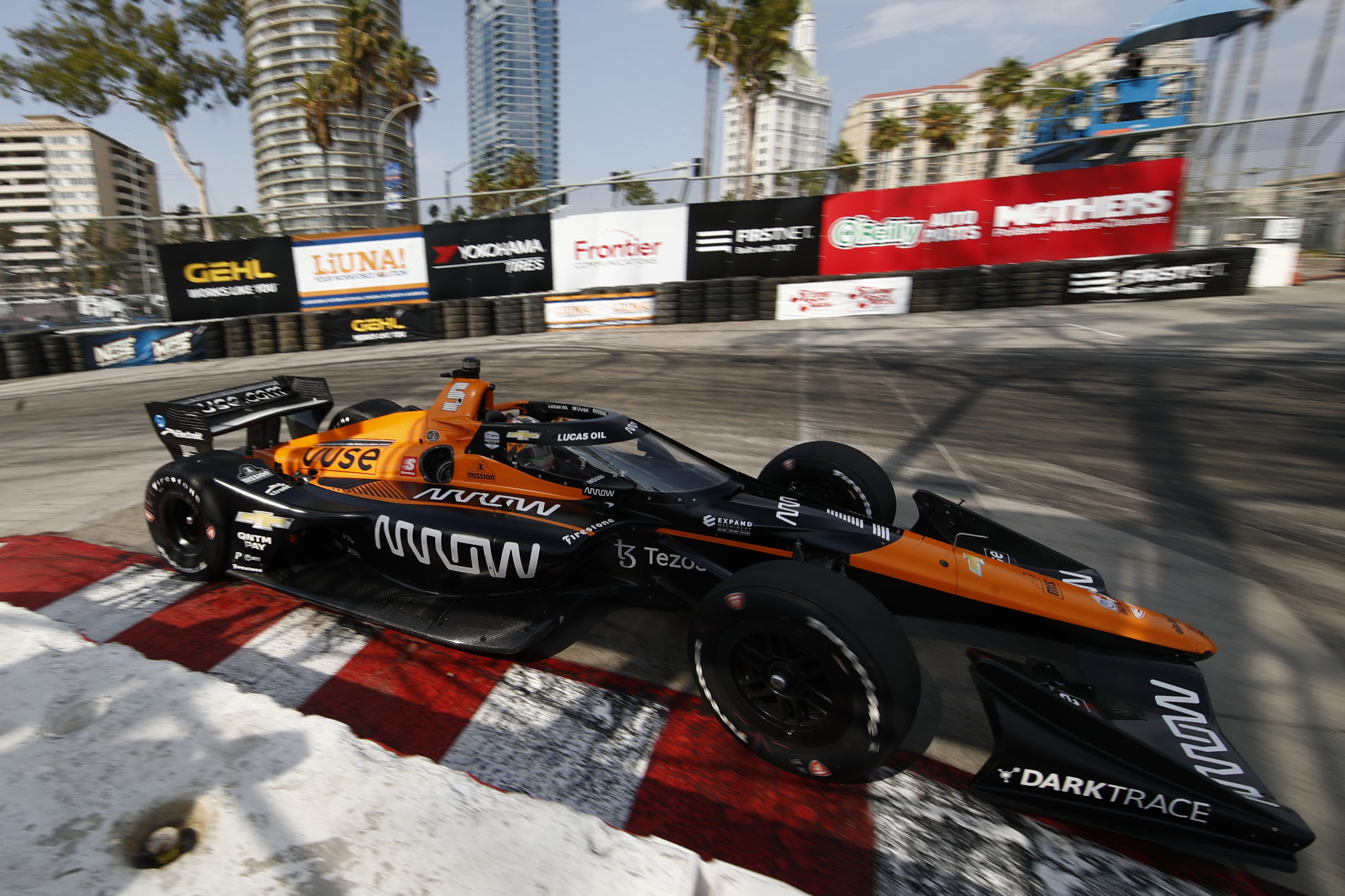 Title contender Pato O’Ward has called IndyCar’s officiating into question after he failed to make it through to the Fast Six at the Long Beach finale while his McLaren SP team-mate Felix Rosenqvist did so allegedly under dubious circumstances.

During the second round of qualifying this morning, Team Penske’s Will Power clipped the wall and stopped at Turn 10, which drew a local yellow flag.

Typically, if a driver were to set their best time under yellow flags, that lap would be scrubbed from the timesheets.

Having seen the yellow flags, O’Ward backed off, as did series adversary Alex Palou of Chip Ganassi Racing.

Upon review, the drivers who had set their best times under the yellow flag were allowed to keep their fastest laps, subsequently seeing O’Ward miss the cut.

“We should be in there,” said O’Ward in relation to the Fast Six battle for pole position.

“We were up on our last lap. I had eyes and saw yellow flags and there were yellow flags until the end of the session.

“Palou had to slow in front of me. I slowed up because that’s what you have to do whenever there’s yellow flags.

“IndyCar is never consistent with the calls. They need to review that because we should be in the Fast Six right now.

“He’s not the only one we’re worrying about,” O’Ward said of Palou.

“There’s Josef [Newgarden], there’s Scott [Dixon], that are in there and we should be fighting against, at least for pole.

“I don’t know if we quite had [enough] for pole but we definitely had enough to get into the Fast Six. Crappy situation, bummer, but we’ll see what we can do.”

O’Ward wound up in eighth while Palou ended the session 10th, meaning the pair will start the race line astern.

O’Ward must finish at least second, and lead a lap for a bonus point, to have any chance of taking the title; Palou meanwhile will be crowned champion if he finishes 12th or better.

Newgarden remains an outside chance of winning the title, though his pole position has helped him edge one point closer in what is a must-win situation for the Team Penske pilot.

For Palou, it was a lacklustre qualifying, though the Spaniard had no fears heading into the race.

“It was maybe not the best of sessions for us, but I think the good thing is we had the pace,” he said.

“It’s good to see Scott up there. We’re going to pull for him now and see what we can do tomorrow from top 10.

“It’s okay, we know we have a good race car. We’ll try and overtake some good cars tomorrow and just focus on ourselves, trying to do the best we can tomorrow.

“If we do a good job tomorrow we’ll get the championship home, otherwise we cannot really focus on what other cars are doing.”

A maximum of 53 points remain on the table, with 50 for the win, plus bonus points (one for leading a lap, two for most laps led).

Palou is 35 points clear of O’Ward, with Newgarden a further 12 back.