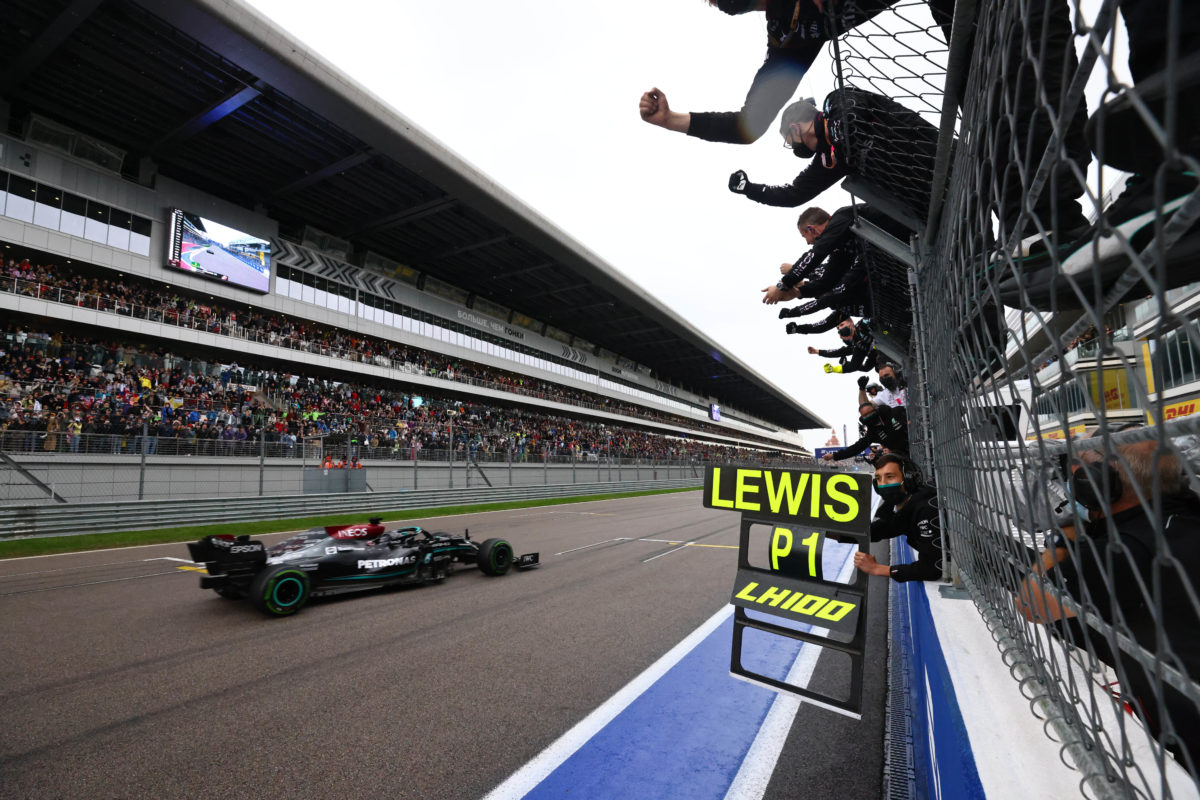 Lewis Hamilton has taken his 100th Formula 1 career win in a nail-biting Russian Grand Prix that proved a crushing blow for Lando Norris.

Strong pace in the second half of the race set Hamilton up, taking advantage of a brave but ultimately foolhardy gamble from Norris as rain began to fall.

The McLaren driver looked to have the race under control, only to lose out in the closing laps when he opted to stay on slick tyres on a wet track.

Hamilton had stopped, easing by to win from Max Verstappen who’d recovered from the rear of the grid and Carlos Sainz third.

A strong start from Norris saw the McLaren driver head the field on the run to Turn 2, only to lose out to Carlos Sainz and slot into second.

Hamilton found himself dropping down the order in the opening stages, Lance Stroll, Fernando Alonso, and Daniel Ricciardo all sneaking by the seven-time champ.

Halfway around the lap, Ricciardo put a move on Alonso to regain fifth, having slipped behind the Alpine in the opening corners.

Sainz enjoyed a 1.2s advantage at the end of the opening lap while Hamilton found himself mounting a challenge on Alonso.

He made the move stick into Turn 4 to reclaim sixth but more than six seconds away from the race leader.

Down the order, Verstappen has risen to 17th while Charles Leclerc, who’d started off the back row, was 12th.

Once the race settled down, Russell was the cork in the bottle, leading Stroll, Ricciardo, and Hamilton in a DRS train.

The Williams driver was more than six seconds down on Sainz after four laps.

Down the order, Verstappen found himself in a similar DRS train, trailing Bottas who in turn was stuck behind Pierre Gasly, Leclerc, Sebastian Vettel, and Kimi Raikkonen.

On Lap 6, the championship leader put a move on Bottas at Turn 13 to claim the spot, the Mercedes driver offering no defense.

Two laps later, Gasly fell victim to Verstappen as he rose to 13th.

The Red Bull driver then had a near miss as he looked to take advantage as Leclerc and Vettel battled, almost finding himself squeezed towards the wall at Turn 6.

Out front, Norris has closed in on Sainz and found himself in position to attack as they started Lap 12.

Nothing came of the effort, the McLaren dropping away by the lap end to cross the line 1.6s away from the leader.

Stroll was the first to pit, taking service after 12 laps with a view to using the undercut as he had a set of hard compound tyres fitted.

No sooner had the Aston Martin rejoined that the lead changed hands, Norris scything by Sainz.

The McLaren driver used DRS down the back straight, cruising by well before the braking zone.

Verstappen was also on the move as he found a way through on Vettel while Russell pitted at the end of the lap ending a furious lap of action.

Sainz pitted on Lap 15, promoting Ricciardo to second but 7.6s down on Norris ahead.

The Ferrari driver returned to the track just in front of Stroll, who’d made strong progress on fresh tyres since his Lap 12 stop.

As those around him pitted, Verstappen was making progress, setting the fastest lap of the race on Lap 16.

He went faster still next time around, eating 1.3s out of the difference to Hamilton in third place.

McLaren pitted Ricciardo on Lap 23, a slow stop hindering his chances as he rejoined behind Esteban Ocon in 14th on the road.

It left Hamilton with clean air, the Brit turning his best laps of the race at a time Verstappen was complaining of a lack of grip in his Red Bull.

On Lap 24, the Mercedes driver banked the fastest lap of the race, reducing his deficit to Norris to 12.4s.

A lock up at Turn 2 on Lap 26 saw Hamilton pit at the end of the lap, Verstappen stopping at the same time.

Hamilton rejoined ahead of Ricciardo while Verstappen slotted in behind Russell in 12th.

McLaren instructed Norris to push, boxing the leader after 28 laps.

He held a 5.6s advantage over Perez as he came into the lane, a 2.9s stationary time leaving him the fourth and the first on the road to have stopped.

Hamilton enjoyed rapid pace following his stop, setting the fastest lap of the race on Lap 31, carving his way through Sainz and Gasly to sit fifth on the road, but a net second to Norris.

The early stop from Stroll saw him fall victim to Ricciardo and Verstappen as the Aston Martin driver struggled for grip on his 20-lap old hard compound tyres.

Hamilton was on a steer, rapidly closing on Norris, the gap between them 5.3s on Lap 34 but the Mercedes driver closing at more than half a second a lap.

Leclerc briefly found himself between the two leaders, the Ferrari driver stopping the Monegasque for medium compound tyres on Lap 36 – his first stop of the race.

The pit sequence finally concluded on Lap 37 when Alonso and Perez finally stopped, leaving Norris in the lead by 3.3s from Hamilton.

Third was Sainz, who had Ricciardo trailing him by little more than a second but with a tyre advantage.

With 15 laps remaining, the gap between the leaders was just over two seconds, Sainz and Ricciardo more than 20s back for the final podium place.

The McLaren driver was clearly managing the gap, turning in a 1:37.423s on Lap 39 to stabilize his advantage.

Slowly but surely, the lead was eroded and with 10 laps remaining just 1.5s split the top two.

Rain was soon after reported by Russell to the Williams pit wall.

That married with the expectations of Mercedes, which had informed Bottas that spots would fall around Turns 4/5.

Behind them, Ricciardo had fallen to fifth behind Perez, who was in pursuit of Sainz in third, 3.6s between the pair on Lap 45.

As Norris started Lap 46, umbrellas and rain jackets were called for in the stands at Turn 5.

“It’s drizzling quite a bit,” reported the race leader over the radio, acknowledging the deteriorating weather.

“Be ready with the inters,” came the call from third-placed Sainz back to the Ferrari pit wall.

A mistake from Norris on Lap 47 saw Hamilton latch onto the rear of the McLaren.

A slide at Turn 6 saw the lead evaporate, but the Mercedes driver was unable to pry the door open and remain second.

The second half of the lap was dry, Norris regaining his composure to hold enough of an advantage as they started Lap 48 to hold his lead.

His lead continued to extend as the brit clearly had more confidence in the slippery conditions, holding sway with a 1.6s lead even with another brief off-track moment..

Told to box, Hamilton opted not to, his deficit to Norris two seconds as Sainz, Ricciardo, and Verstappen did head into the pits.

Hamilton stopped next time by, Norris remained on track to lead by 49 seconds over Perez in second with four laps remaining.

On slicks, Norris was able to lap Nikita Mazepin, only for the Haas to have more grip on inters and unlap himself.

The rain continued, Norris’ lead 14.2s to Hamilton as plumes of spray began to form.

The McLaren driver had made the wrong decision, Hamilton taking the lead on Lap 51 as Norris slid off the road without any grip.

He pitted at the end of the lap, Verstappen climbing to second as a consequence and Leclerc third.

The Ferrari driver then had an off to slip back to sixth, Sainz taking his place in the final podium place.

Norris rejoined sixth after his stop, though he was set for further pain after crossing the line on pit entry as he struggled for grip.

Hamilton went on to deliver his 100th career win, Verstappen second to the flag more than 50 seconds in arrears.

Sainz held on to third from Ricciardo, then Bottas, Alonso, Raikkonen, Norris, Perez, and Russell.