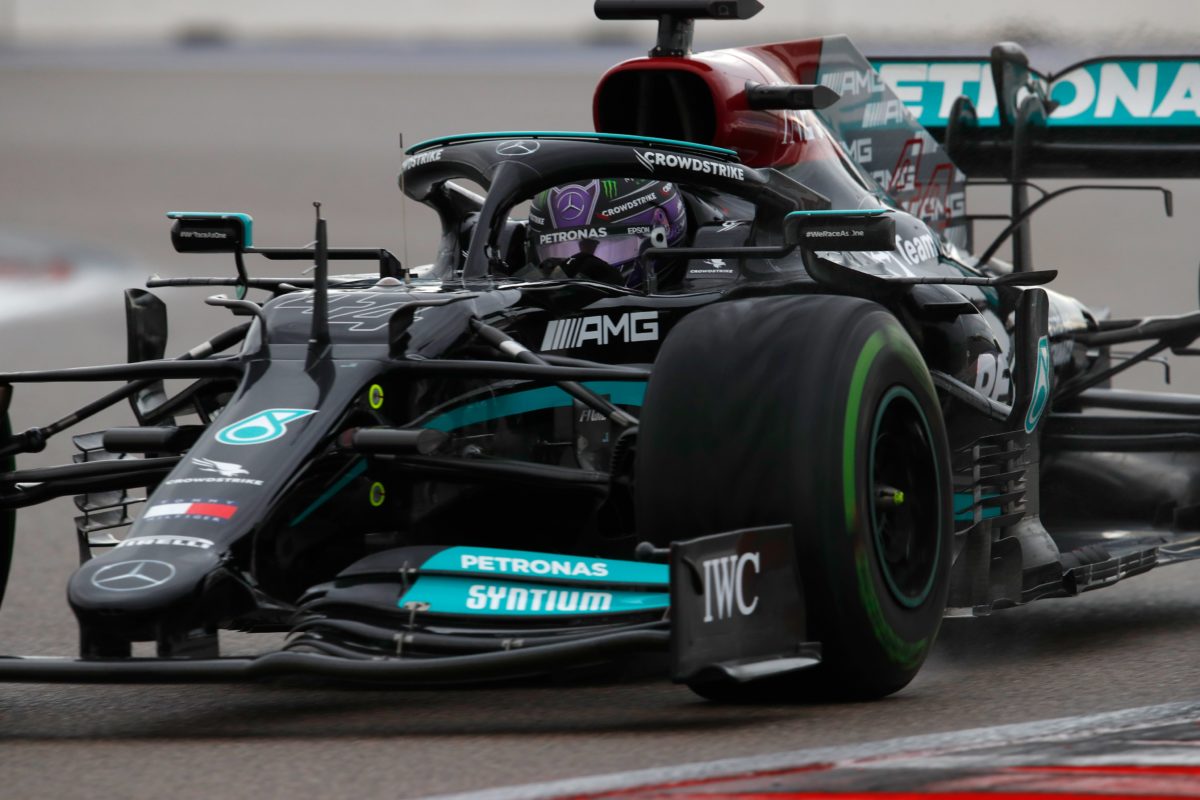 Lewis Hamilton has apologised to his team following qualifying for the Formula 1 Russian Grand Prix after twice tagging the wall.

The Brit will start fourth for Sunday’s race after failing to improve on his Qualifying 3 run after switching from intermediate tyres to slicks in drying conditions.

His cause wasn’t helped by impacting the wall twice as he entered the pits ahead of the change, damaging his front wing in the process.

It was a mistake that comes on a weekend that offers something of a free kick in championship terms as Max Verstappen starts the race from the rear of the grid follow a power unit change.

“Just a mistake from myself,” Hamilton told Sky Sports of his qualifying woes.

“Ultimately, incredibly disappointed in myself.

“Up until then I was in the groove, I was really in the zone and I’m really sorry for all the team.

“Obviously that’s not what you expect from a champion.

“But, it is what it is and I’ll do my best tomorrow to try and rectify it.”

Sochi has been a happy hunting ground for the team since F1 arrived in Russia in 2014, and that looked again to be the case after Friday’s running.

Drying conditions in qualifying, and missing the ideal moment to switch to the slick tyres, ultimately hurt their chances and left both Hamilton and Bottas powerless in the session’s latter stages.

“It was horrible and actually, at the end, very poor grip, very slippery when you don’t have any temperature,” Hamilton said.

“I was losing temperature during the lap.

“And then even twice in the wall, that’s very rare for me.”

Though the impact with the pit wall, and resulting damage, delayed both Hamilton and Bottas, team boss Toto Wolff suggested it was not the defining moment of the session.

Even without the incident, Wolff suggested neither driver would have made it around in time to start an extra lap on the dry tyres, making the impact of Hamilton’s error virtually nil.

“The knock made no difference to where we were on track, we would have even been earlier over the line,” Wolff told Sky Sports.

“It’s a Lap 2 tyre, the slick, and I’m sure we would have been fast enough for the front row, but with one lap, you have no chance to heat it up.”

Wolff then doubled down, suggesting his team would make the same decision should it have its time over – leaving its cars on track longer than its rivals before swapping to slicks.

“I think today was no mistake, honestly,” he ventured.

“If you let me turn back, what we would change, is maybe not go out first on the track but go out a minute later.

“But knowing that this would have these consequences at the end is a crystal ball reading, so at the end of the day, it was unlucky.

“It cost us P1, P2 on the grid and now we need to turn it around tomorrow, but these things sometimes go against you.”

Starting from the second row, and with conditions expected to be both dry and far more stable than experienced on Saturday, Mercedes and Hamilton are still viewed as strong favourites.

“The guys out front have got good pace and it definitely won’t be easy,” Hamilton said of his chances of victory.

“I’m just going to say my prayers and hope that the car can be fixed and it’s hopefully okay for tomorrow.

“These things are sent to try us and as I feel terrible right now, but I’ll turn it into a positive and try and do the best, but you got a Brit on pole which is which is great, so congratulations Lando.”

The Russian Grand Prix gets underway at 22:00 AEST.