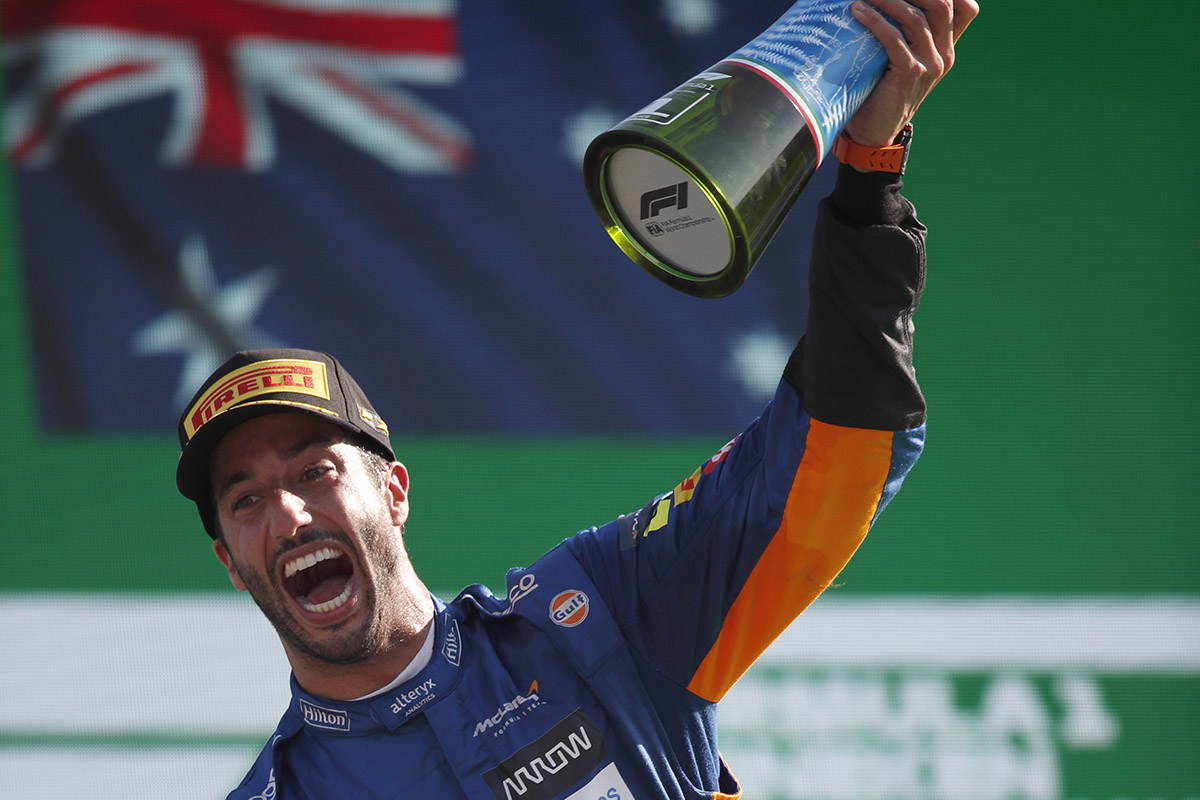 While victory in the Formula 1 Italian Grand Prix “made everything worth it” for Daniel Ricciardo, he has quickly calmed expectations in typical Australian fashion.

Ricciardo famously won in Monza last time out with a commanding drive, ending lengthy win-droughts for both he and his McLaren team.

With McLaren having shown particularly strong pace in Monza, he was quick to hose down questions surrounding a potential repeat this weekend in Russia.

“We’re just going to keep doing our best,” he added on a more serious note.

“Victory aside, I felt better the last few weekends, I felt more comfortable and of course just excited to come racing.

“The break was good but obviously I’m ready to go again and I think I’ve shown that.”

It’s been something of a whirlwind for Ricciardo since his Italian GP win, the eighth F1 success of his career.

In the week following the event he returned to the McLaren Technology Centre, where he and Lando Norris celebrated McLaren’s first victory since 2012 with team staff.

While there, the 32-year-old placed his trophy alongside that won by Ayrton Senna at the 1993 Australian Grand Prix – an event Ricciardo attended with his father.

Filmed and posted on McLaren’s social media, the moment left the Aussie speechless.

“It was, I think, just a little bit surreal,” he explained in Russia.

“I’ve been doing this a few years now, but I still pinch myself.

“A lot of the time I still think it’s kind of crazy, like, what I’m doing, I guess. It’s cool.

“I’m not that absorbed in it that I can’t actually… I’m still able to step out of it and see, the coolness of things like that.”

He added it was an almost overwhelming experience as much of the F1 paddock celebrated his return to the top step of the rostrum for the first time since Monaco 2018.

“That makes me happy, knowing I can have a positive impact, and so many people patting me on the back and that, that’s a bonus,” he said.

“Obviously I got into this sport because I wanted to be the best and I wanted to show what I could do, but to have an effect as well…

“At one point I was like ‘stop posting about me because everyone’s going to get sick of me!’

“But again, very flattering and just a nice feeling to have.”

Though pleased to have ended his dry spell, Ricciardo stopped short of labelling his Italian GP success vindication for his decision to leave Red Bull.

“Even through the struggles this year, or over the last couple years at times, I never really got into the mindset of ‘is this it? Was Monaco the last time I’ll get there?’

“I knew I’d probably have to work a little bit harder for it.

“Certainly like last year, for example, getting the Renault back on the podium, that was such a target.

“Achieving that, I took a lot of fulfilment, obviously so did the team.

“And Monza was, if you like, it did kind of make everything worth it, I guess,” he added.

“It was just nice to stand back up there.

“I think also to do it with another team, there’s certainly a sense of pride in that – making it work and getting to that top step with another outfit, and none other than McLaren.

“There’s certainly some feel good stuff about it.”