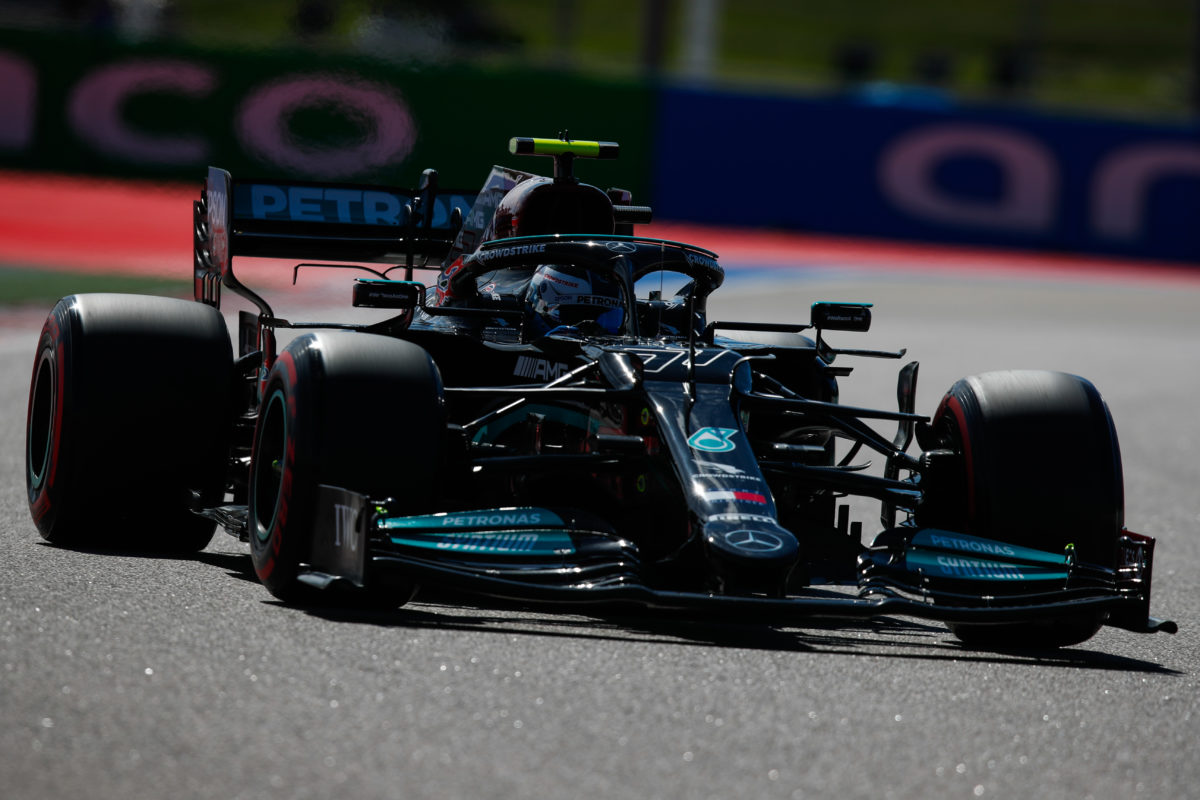 Valtteri Bottas has enjoyed a perfect start to the Formula 1 Russian Grand Prix weekend after topping the second practice session.

The Finn had been fastest earlier in the day too, Bottas joined at the head of proceedings by team-mate Lewis Hamilton in both 60-minute outings.

An issue found in the Mercedes power unit in Daniel Ricciardo’s McLaren saw him miss the start of the session.

The team was busy completing a swap to another unit within the Australian’s pool as practice commenced, with work to repair the original to take place this evening.

On track, the majority were on the soft or medium compound tyres early, the Aston Martin pairing and Lando Norris the only to opt for the hards.

Charles Leclerc again set the initial pace, as he had done in opening practice, with a time of 1:34.925s.

Having just set a time, Hamilton slowed and crawled his way around the Sochi circuit to record a time in excess of three minutes.

A mistake in pit lane saw the Brit overshoot upon arrival into the box, skittling the front jack man in the process.

Bottas was again the pace-setter, logging a 1:33.593s to head the session by more than half a second once things got going.

That gap was reduced when Hamilton improved to 1:33.637s after 24 minutes, but was still unable to reel in the sister Mercedes.

Sitting third was Norris, the McLaren setting a best of 1:34.154s, which had been good enough for second prior to Hamilton’s effort.

Max Verstappen was then next best, his Red Bull sporting a new Honda power unit that will relegate him to the back of the grid on Sunday.

Exiting Turn 8, Charles Leclerc had a spin but somehow kept the pirouetting Ferrari out of the nearby barriers.

Midway through the session, 19 of the 20 runners had fitted the soft compound tyres, the exception being Leclerc.

Completing a qualifying simulation, Pierre Gasly rose to third fastest with a 1:33.845s as Verstappen returned to the circuit with a set of medium tyres on his Red Bull.

A moment for Antonio Giovinazzi saw the red flag thrown, the Alfa Romeo mangled at the back end after impacting the barrier at Turn 8.

The Italian dropped a rear wheel on the astroturf on corner exit, pitching it into a spin and sending it rearwards into the barrier.

The session resumed with 16 minutes remaining, all bar Ricciardo (and Giovinazzi) taking to the circuit.

He soon joined proceedings, heading out on a set of soft tyres but only capable of rising to 17th fastest before ending the session in the garage.

The order remained unchanged, Bottas on top both on single lap pace and seemingly over a race stint too.

Hamilton was second best from Gasly, Norris, Esteban Ocon, and then Verstappen in sixth.

The balance of the top 10 was made up of Carlos Sainz, Fernando Alonso, Sebastian Vettel, and Leclerc.

Gasly’s session ended sans front wing, reporting that ‘something broke’ on the AlphaTauri as he exited Turn 2.

The Frenchman had missed the apex the corner, bouncing over the sausage kerbs to dislodge the wing which broke at the mounting points and fell under the car.

On track action is scheduled to continue with Free Practice 3 on Saturday morning, however with heavy rain forecast there are suggestions it could be rained out.

The same goes for qualifying, with suggestions that could be rescheduled for Sunday morning.

Failing that, it’s possible the order for Free Practice 2 could determine the grid for the race.