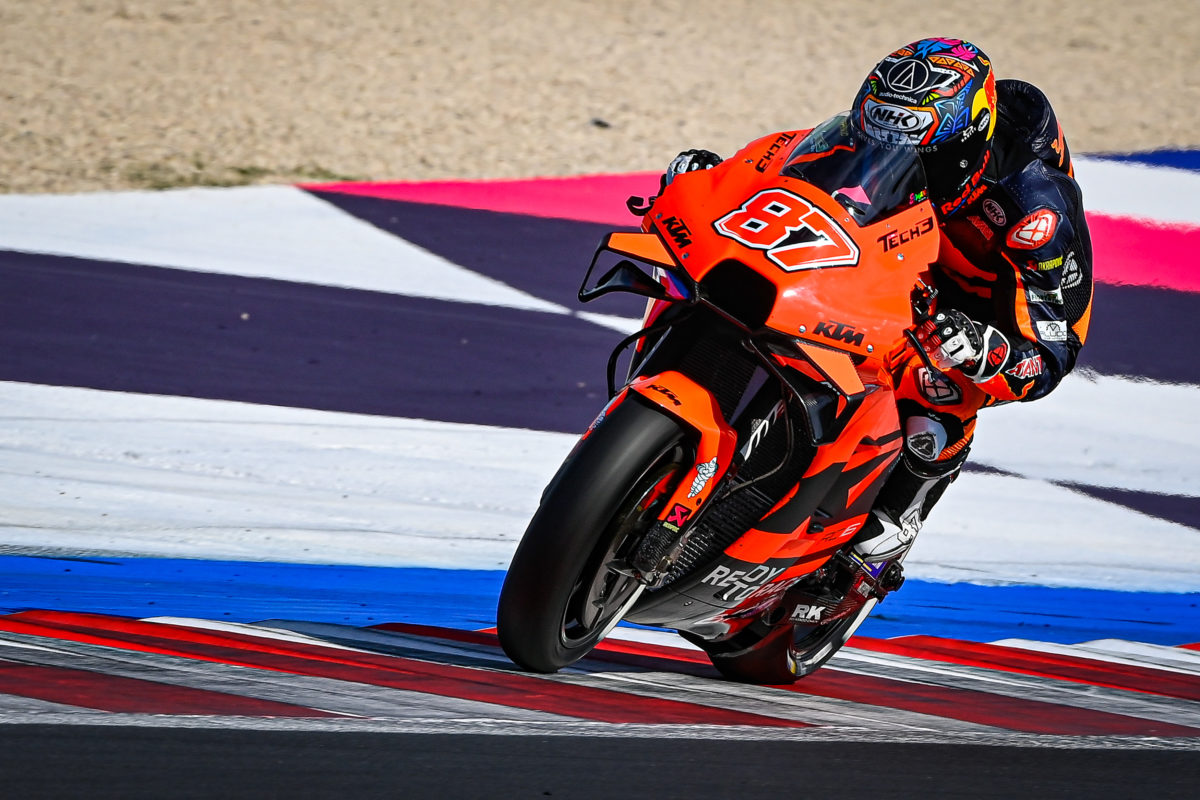 Remy Gardner has described his first day on a MotoGP bike as a “mind-blowing” experience.

Gardner and Moto2 team-mate Raul Fernandez got an early induction with the KTM RC16 on the final day of the Misano Official Test, before both make the step up to the premier class with Tech3 KTM Factory Racing next year.

Fernandez had led the Australian to a Red Bull KTM Ajo one-two just three days earlier in the San Marino Moto2 Grand Prix, but the Misano World Circuit Marco Simoncelli was a vastly different proposition on a MotoGP bike.

“It was incredible, honestly,” said Gardner after racking up 44 laps across the morning and afternoon sessions.

“Obviously, we expect the power and the brakes and everything but until you really try it, you don’t understand.

“So, it was incredible; honestly, you’re just putting gears like there’s no tomorrow. It’s just endless.

“Still, even the last laps, it’s mind-blowing how fast those bikes are, but had a great day, had a lot of fun, and can’t wait to start.”

Both of the future Tech3 KTM rookies had described the test as mostly just a reward for their efforts in dominating Moto2 this year.

However, team owner Herve Poncharal explained that the outing would also be a useful exercise in determining ergonomics, minimising time wasted when they are back for the post-season test at Jerez in November.

For Gardner, the RC16 was already a fairly comfortable ride.

These smiles say it all 😄
Back at the garage after their first ride 🏍💨#MisanoTest #MotoGP #Tech3KTMFactoryRacing #RF25 #RG87 @MotoGP pic.twitter.com/wkv0anJdS0

“It was good to just try the bike and get an understanding of what it’s all about,” he remarked.

“We didn’t do too many laps in the end, but just to get an understanding and feel the power and I guess it was kind of like a little treat for us from KTM…

“It was nice to ride the bike – I’m not sure I would have changed too much for next year – but it was a nice little treat and definitely I had a lot of fun, so I can’t complain.”

The Sydney-born rider also had a spill at the Turn 10 hairpin, but laughed it off.

“To be honest, it was a bit of a stupid crash,” admitted Gardner.

“Just with the new tyre in the rear, the thing hooked up a bit more than expected and it was wheeling.

“As I got to Turn 10, I was way off-line and we’re going a lot faster than we are on the Moto2 bikes, so when I went for the brakes, I was off-line and started going wide and tried to stop the bike before the dirt and just fell over just before the dirt.

“So, stupid little crash, but anyway, got the first one out of the way, so hopefully we keep it to a minimum.”

Gardner leads Fernandez by 34 points at the top of the Moto2 championship with four rounds remaining and thus another 100 points on offer.

The next of those rounds takes place at the Circuit of The Americas on October 1-3 (local time).