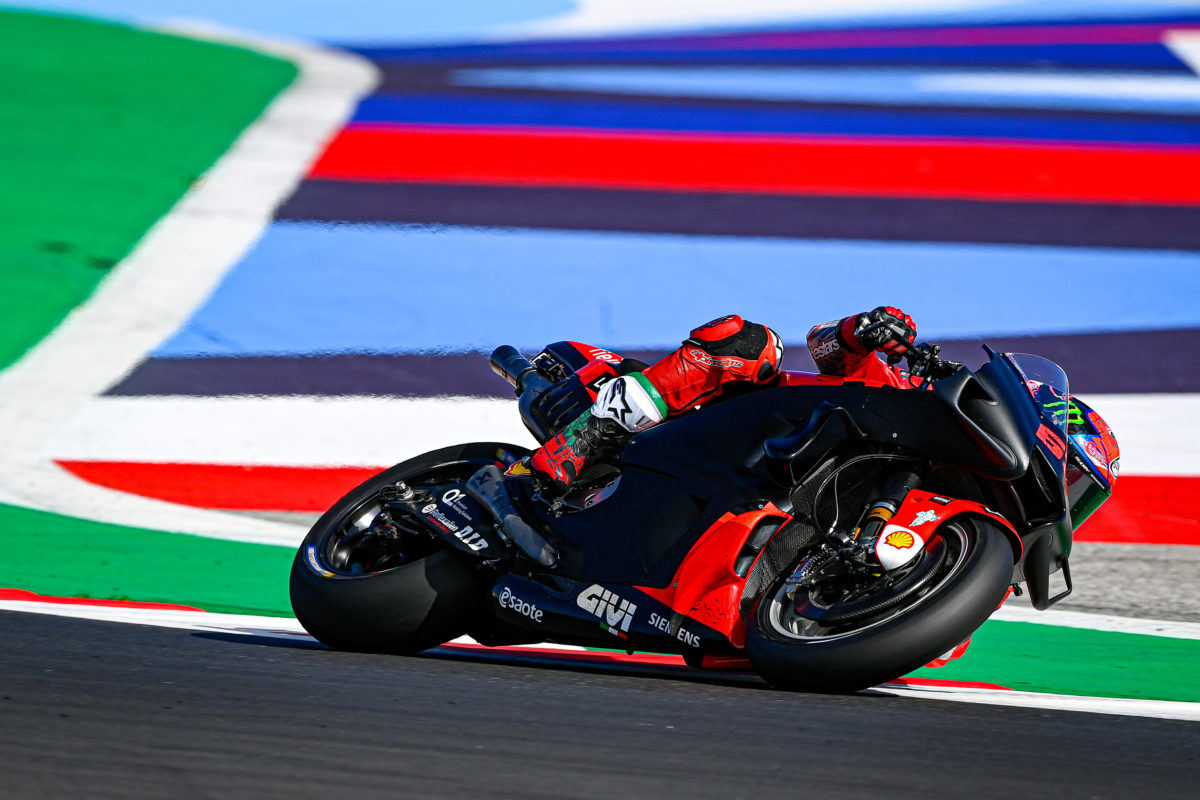 Francesco Bagnaia has set the pace on Day 1 of the Misano MotoGP test despite crashing one of the Ducatis.

The last-start winner dropped his Desmosedici at the Turn 10 hairpin while running with a new aerodynamic package, as Ducati Lenovo team-mate Jack Miller and Pramac Racing’s Jorge Martin did during the day.

Miller ended up eighth at 0.520s off the pace, Martin was ninth-quickest, and Pramac’s Johann Zarco 13th, with the latter handing over to Ducati test rider Michele Pirro on Day 2 as he undergoes arm pump surgery.

While Pol Espargaro was a tenth away from the benchmark lap time, the big news at Honda was Marc Marquez and test rider Stefan Bradl cutting laps on a new RC213V.

The Japanese marque has seemingly experimented with a number of different chassis specifications of late, with the latest bike sporting revisions to the front aerodynamics and air intake, as well as to the seat, tail unit and exhaust.

Marc Marquez wound up 15th, while Idemitsu LCR Honda’s Takaaki Nakagami was fourth for the day with a 1:31.913s.

Joan Mir led the way for the Suzuki Ecstar Team in fifth on a 1:31.927s, with both he and team-mate Alex Rins, who ended up 14th on the timesheet, testing the Hamamatsu marque’s 2022 engine.

Monster Energy Yamaha’s Fabio Quartararo was sixth on a 1:31.980s, and was seen lapping on a 2022 prototype in the afternoon.

Lorenzo Savadori was back in action for Aprilia, riding with a new aerodynamic package.

The man who took over his race seat, Maverick Viñales, finished 16th at 1.066s off the pace, with a spill at Turn 15 along the way.

Only eight riders went out in a weather-affected morning session, when Zarco was fastest on a 1:33.895s and Bradl notching up 34 laps.

The second and final day of the test commences tonight, and will see future Tech3 riders Remy Gardner and Raul Fernandez in action on a KTM.