Scott McLaughlin gives his take on the penultimate round of the 2021 IndyCar Series at Laguna Seca in his exclusive Hired Gun column, presented by Grove Hire.

Mistakes can sometimes define us.

As racers we try for utopia – a perfect weekend with no mistakes.

As I sit and write this after a weekend at Laguna Seca – I put my hand up for two errors – which unfortunately cost us dearly of a result which should have been so much better.

We qualified 16th on Saturday – and I was left to rue an error to not go for one more flyer to advance to the final six.

And that’s where we SHOULD have been. Especially after topping the timesheets after practice 2.

I was seething afterwards!

And then we finished the race 12th – but for so long we were on for a really strong AND positive top 10 result, until our final stop.

I just slipped through our pit box in our final stop – costing us a bunch of spots.

So we are so close to getting one of these weekends bang on. So close.

And I’m so desperate to get a ripper result, but it’s just eluding us.

So it’s testing us. And ticking us off. But we’ve got one more weekend to come to try and get it. I’m sounding a bit like a broken record, right?!

But don’t feel sorry for me.

I’m kicking myself, but still confident things are getting there.

In that, I am positive.

And my team is sticking by me – and are thrilled with the progress not just by me, but everyone on the #3 Chevy is making.

We have a brilliantly united bunch on my car who I’ve grown to love – we have come a long way, we feel like we are making great gains and we do think we have some momentum.

Now we just need a little bit of luck, and we need to try and eliminate our errors – no matter how small, and the dude behind the wheel needs to nail it.

So we’re staying positive as we head to Long Beach for one of the most famous races on the calendar to finish our rookie season.

It’s seriously a blast, this series.

I heard Romain Grosjean after the race talk about how much he loves it compared to Formula 1 where he’s been.

The racing is so fierce and brutal and competitive.

And the tracks are insane – Laguna Seca is just the most wild place. It reminded me every lap of Mount Panorama back home. The corkscrew is something!

My first lap – I’m trying to get it to stick on to my social media so you can all see – I passed six cars in the first handful of corners.

And the whole time I’m hanging on for dear life!

So we remain 13th in the championship, but after his podium finish, Romain is right on our hammer for Rookie of the Year. 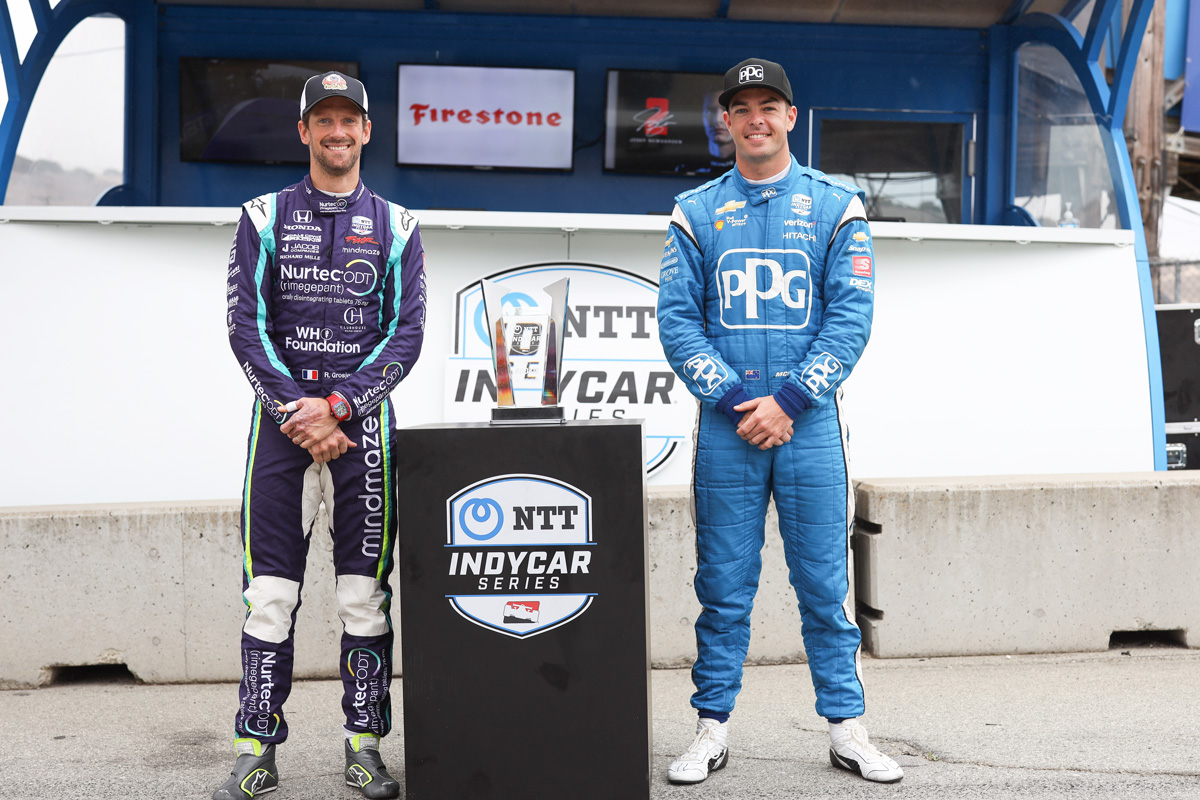 It’s going to be game on between us on the streets of Long Beach next week!

It’ll be a rough Saturday already I’m tipping – I’ll be up super early to watch my Doggies in the AFL Grand Final against Melbourne.

Watching them win the flag in 2016 was one of the best days of my life, so hopefully it can lead to a great weekend for all of us!