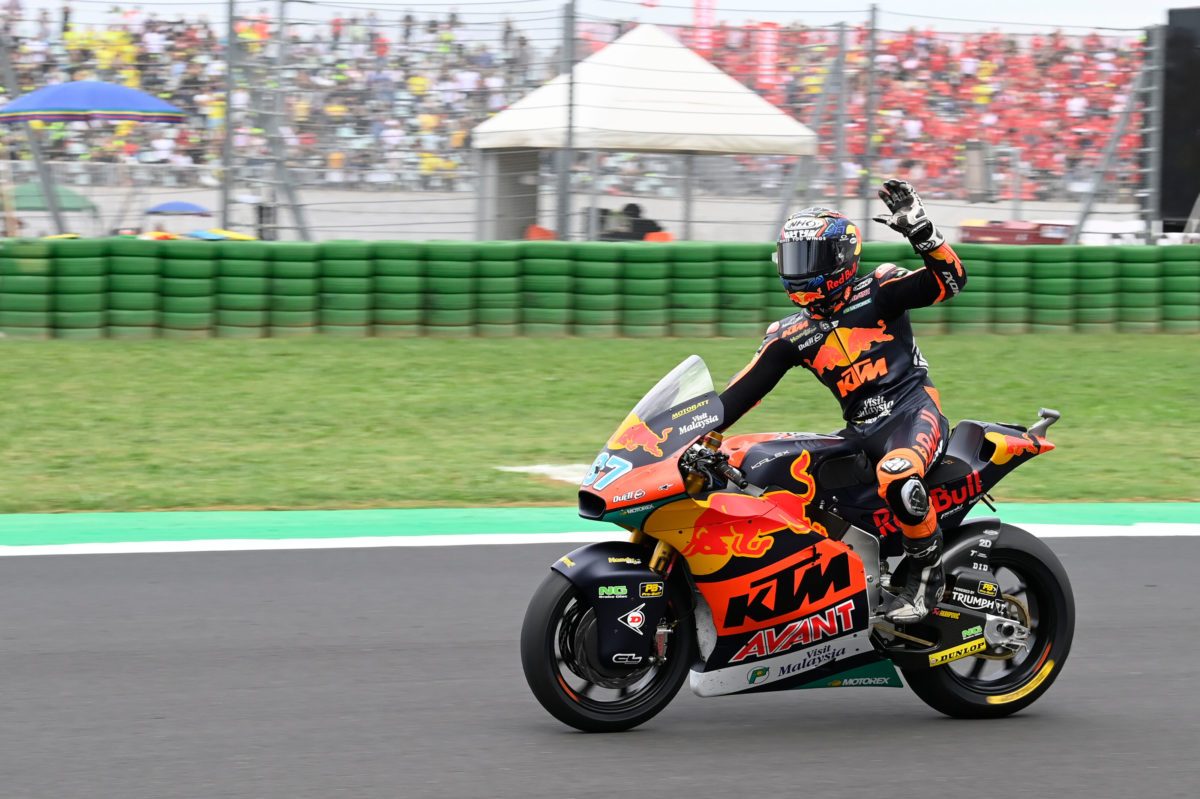 Remy Gardner is keen to improve in qualifying after it proved his “downfall” in his bid for victory in the San Marino Moto2 Grand Prix.

Gardner was a genuine threat to Red Bull KTM Ajo team-mate Raul Fernandez on the final lap and still finished second despite a big moment through Curvone, the fastest corner at Misano.

However, that was something of a fightback after he lost ground in the pack on Lap 1.

The championship-leading Australian has previously spoken of qualifying as being something of a weak point, including in the lead-up to the Aragon Grand Prix which immediately preceded the first round at Misano this year.

Then, he put the #87 KTM Ajo in the middle of the front row, but that is the only time he has started with fresh air ahead of him in the last four rounds.

“There’s some tracks where [qualifying is] not as critical, but definitely tracks where you’ve got stop-and-go corners like the first sector [at Misano], everyone can bunch up and you can get swallowed, [and] it’s a bit more critical,” explained Gardner.

“So, I definitely want to be keeping it on the front row in the future; that was probably ultimately today’s downfall.

“If we can improve a little bit on quali… It’s more just maybe having someone give a slipstream or something like that … I don’t know, we’re working something out to get the quali a little bit better.

“I mean, we’re not far off, honestly – fourth is not horrible – but it’s just enough to get swallowed sometimes, so definitely something we need to work on towards the end of the year.”

To Gardner’s point, three of the four circuits still to come on the calendar are arguably difficult to pass at, namely the returns to Misano and Portimao, and the finale at Valencia.

He qualified fourth last time out at Misano and was third for the run to the first corner, but got held wide at Turn 4 and lost three positions.

By the time #87 had passed Aron Canet for second position on the penultimate lap, the deficit to Fernandez was almost a full second.

Gardner had just about caught his KTM Ajo team-mate by the end of Sector 2 on the last lap, but then very nearly launched himself skyward at Curvone and instead had to focus on keeping Canet behind him.

“It was a little hairy moment in the last lap,” said the Sydney native.

“The first few laps, we were so far back, [and] I lost a lot of time fighting with other guys that just were fighting for no reason.

“Once I finally got through, I could come back, but Misano’s a track where you can’t really just make up two tenths a lap; it’s just half a tenth here, one tenth a lap, you’ve got to really push hard to make up time.

“So, it was hard but, the last five laps, I really started pushing hard and the feeling was a little bit better with the bike with the less fuel.

“When I fought past Aron, I started really catching Raul and I honestly thought I could try and attack for the victory – at least try – and got really close but, unfortunately going into Turn 11, had that little moment, and happy to save second place.

“Raul did a great race and, you know, it’s 20 points more, one race less, but it was definitely a hairy moment so I can’t complain.”

Gardner and Fernandez, both future Tech3 riders in the premier class, will test a KTM MotoGP bike tomorrow at Misano, before Round 15 of the season at the Circuit of The Americas on October 1-3 (local time).