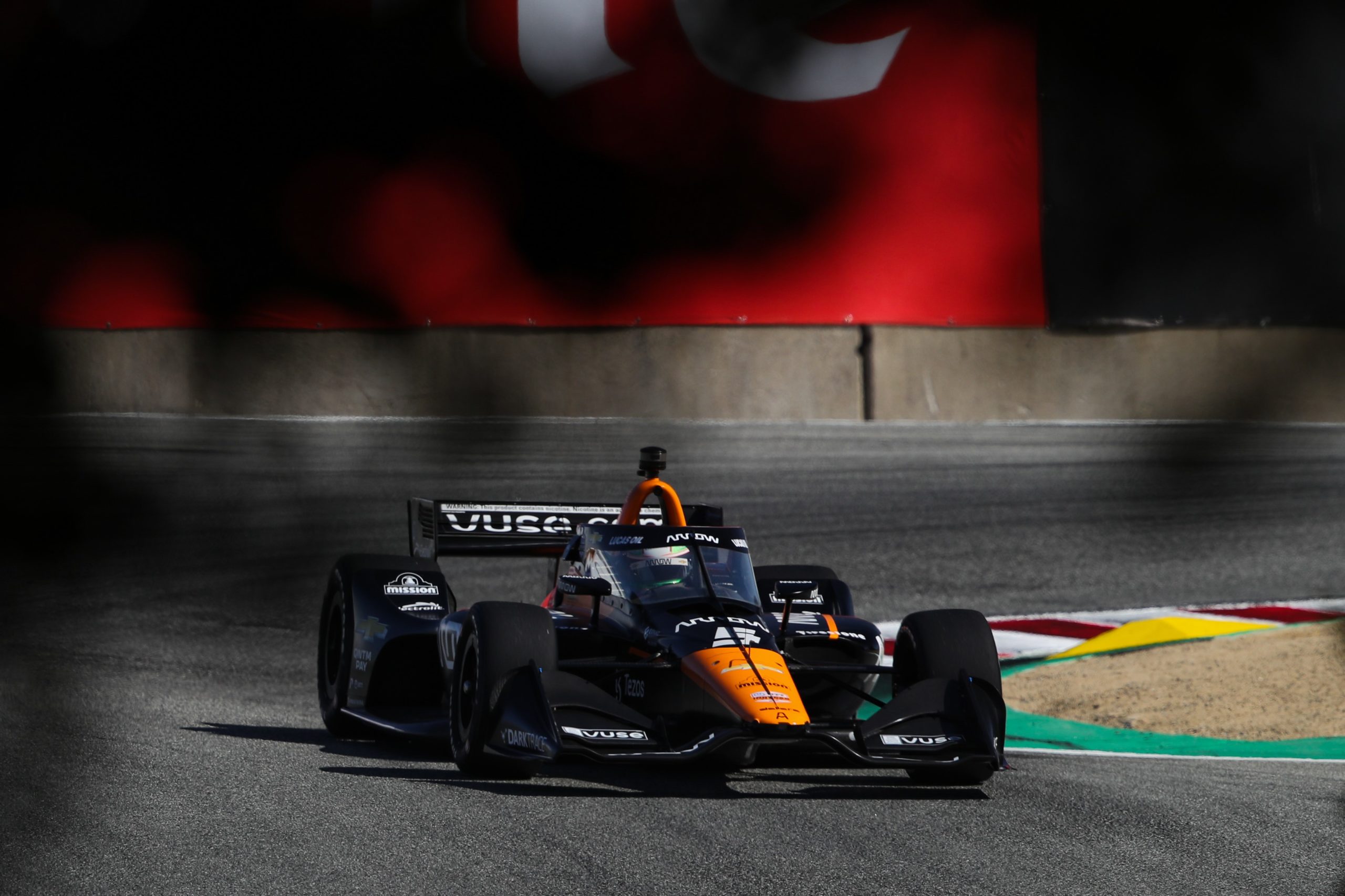 There were mixed emotions for Pato O’Ward after a fighting fifth place finish in the penultimate round of the IndyCar Series at Laguna Seca.

O’Ward came into the Grand Prix of Monterey 25 points in arrears of series leader Alex Palou (Chip Ganassi Racing), who edged out to a 35-point advantage after a second palace finish to Colton Herta (Andretti Autosport).

For the leading McLaren SP driver, fifth represented a strong result after a weekend where he thought he wouldn’t be competitive.

The 22-year-old was the only top 10 starter to begin the 95-lap race on the harder compound tyre. As a result, O’Ward was swallowed up in the opening stanza of the race, falling to ninth before the first round of pit stops began in earnest.

“Yeah, I’m, like, disappointed, happy… happy because I think we pulled off a miracle with what package we had this weekend,” O’Ward explained.

“We didn’t have anything at all. I don’t know how I pulled off a Fast Six in the qualifying, to be fairly honest. I think that put us in a great position to start.

“We took a risk. We started on blacks [hard compound tyre], because that’s our worst tyre – has been all year – but the preferred tyre was new.

“We only had one set of new reds [soft compound tyre], so we were forced to use three blacks, one new red. That was our race.

“We did everything we could. I fought like hell. So, I mean, we’re sort of still alive in the championship.

“I know a lot of things can fall either our way or against us in Long Beach. What we can try and do is just go there and try and win it and we’ll see where everything else falls, I guess.

“If you see our practice sessions and warmup, I don’t think we went better than 16th. I think that just shows that for some reason we were really struggling to find pace.

“A fifth I think is pretty fantastic for us this weekend.”

Chip Ganassi Racing has been a force to be reckoned with in 2021. The team has thus far won six of the 15 races to date, the most of any outfit.

Palou has led the charge with three wins to date while Marcus Ericsson has two and Scott Dixon has one.

While McLaren SP has underpinnings as Schmidt Peterson Motorsports, the McLaren name has only been present in the modern era for less than two seasons.

For O’Ward, winning races and contending for a title in only his second year with the team is a major achievement in itself.

“I think we’ve made a significant jump in just execution,” said O’Ward.

“But we’re not there yet. We’re not where Ganassi is specifically because, I mean, the guys have three cars in the top five in the championship.

“If you ask me whose championship it is to lose, it’s them. We’re here as underdogs.

“It’s the first time we truly challenged for a championship of this magnitude, with this amount of competitiveness.

“I mean, I don’t think it’s ever been this stacked. We’re up against multi-time champions.

“I think it’s been a fantastic year, I have to say. I mean, I’m very proud of what we’ve been able to accomplish. Really proud of how we’ve grown, but we’re not there yet.

“We need to keep pushing and we need to keep improving. I think when we find a little bit extra that we need, it should put us into contention of more wins just more frequently.”

The 2021 IndyCar Series comes to a close on the streets of Long Beach on September 27 (AEST).