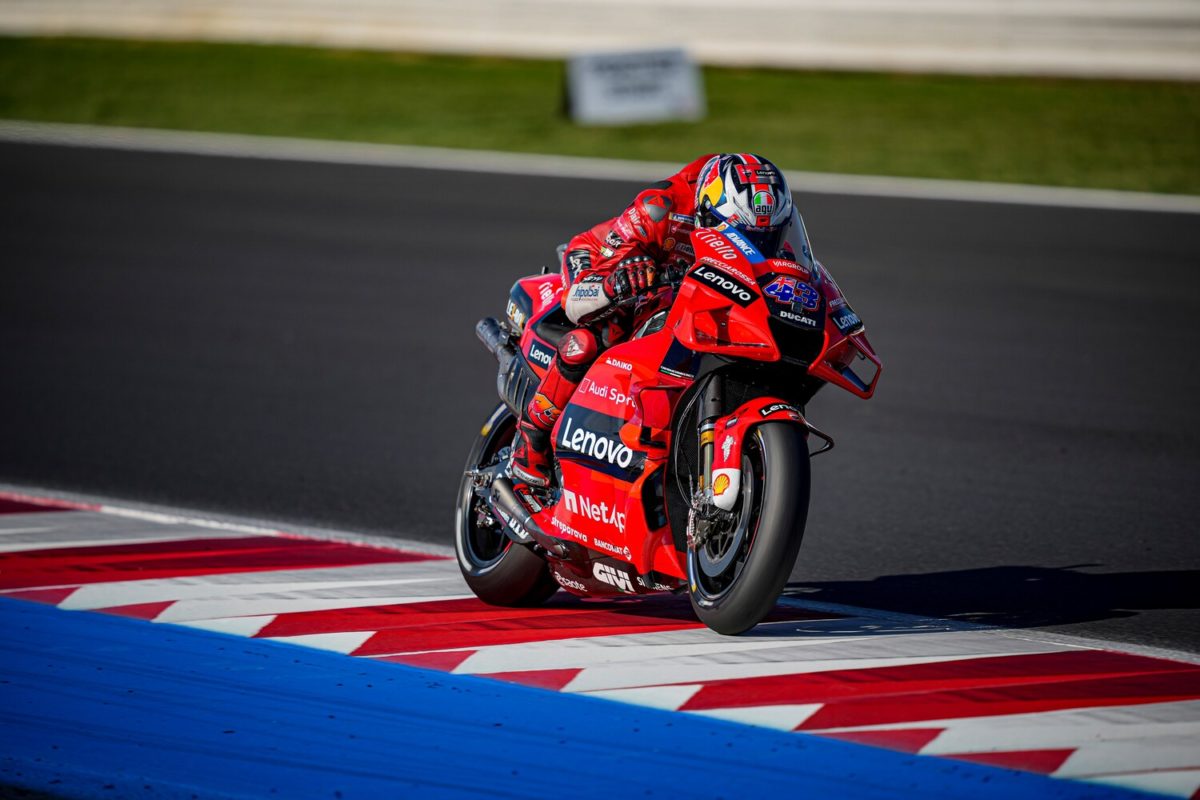 Jack Miller has set his sights on securing third in the MotoGP championship after another frustrating race, this time at the San Marino Grand Prix.

Miller faded to fifth at Misano having qualified second and held that position until halfway through the 27-lap contest.

He is now 46 points, or almost two rounds, behind race-winning Ducati Lenovo team-mate Francesco Bagnaia, but gained ground on both Joan Mir and Johann Zarco.

However, Miller is not just focused on himself, but rather also watching the teams’ championship, as well as reiterating the stretch goal of helping Bagnaia to catch Fabio Quartararo in the riders’ standings.

“We’re at that time of the year now when you look more at the championship standings to see what’s possible, and for us the teams’ championship is within reach, for sure,” wrote the Queenslander in his post-round newsletter.

“We’re creeping closer and closer to the factory Yamaha boys. Last year we helped Ducati get the constructors’ title and that was fantastic, so get the teams’ one this time would be massive for us.

“For me, seventh is the best I’ve done over a season before now so I’d love to get myself on the rostrum, inside the top three, and I reckon that’s possible.

“I’m only a point off Zarco in fourth now and 27 behind Mir in third, so there’s a bit of work to do with four races to go, but it’s achievable, so I need to keep chipping away at it.

“It’s definitely not out of the question for Pecco [Bagnaia] to win the whole thing too, so I’m happy to help out with whichever way I can.

“If I can see an opportunity to try and help Pecco, I’ll definitely try and do that.”

Miller’s deficit on the road to Bagnaia blew out from just over a second to more than two on Lap 8 when he ran well wide through Turn 13.

Quartararo got through on Lap 14 and Enea Bastianini on Lap 19, as #43 came to seriously want for rear grip.

Miller had chosen the same hard front/soft rear rubber combination as his team-mate, and suggested his woes were due to an issue with a tyre.

“Pecco chose the hard front/soft rear tyres like I did and he won the race, so I don’t think it was the combination or the choice of tyres for me that was the problem,” reasoned the 26-year-old.

“Massive congratulations to Pecco, he did a good job for sure. I was struggling with some vibrations from the middle of the race and that was pretty much it, really.

“I was comfortable and confident in the beginning but after I had that bit of a moment, it was a struggle.

“This track is particularly hard on the left side of the tyre, so I’ve said my piece about the tyre and we’ll have to analyse it, find the issue and get on top of it.”

Miller was swamped by Marc Marquez and Mir in the closing stages, and the latter in fact took the chequered flag ahead of ‘Jackass’ but was handed a position drop penalty for exceeding track limits just after he made the last-lap pass.

Next up for the MotoGP field is a two-day test at Misano this Tuesday and Wednesday, before Round 15 at the Circuit of The Americas on October 1-3 (local time).