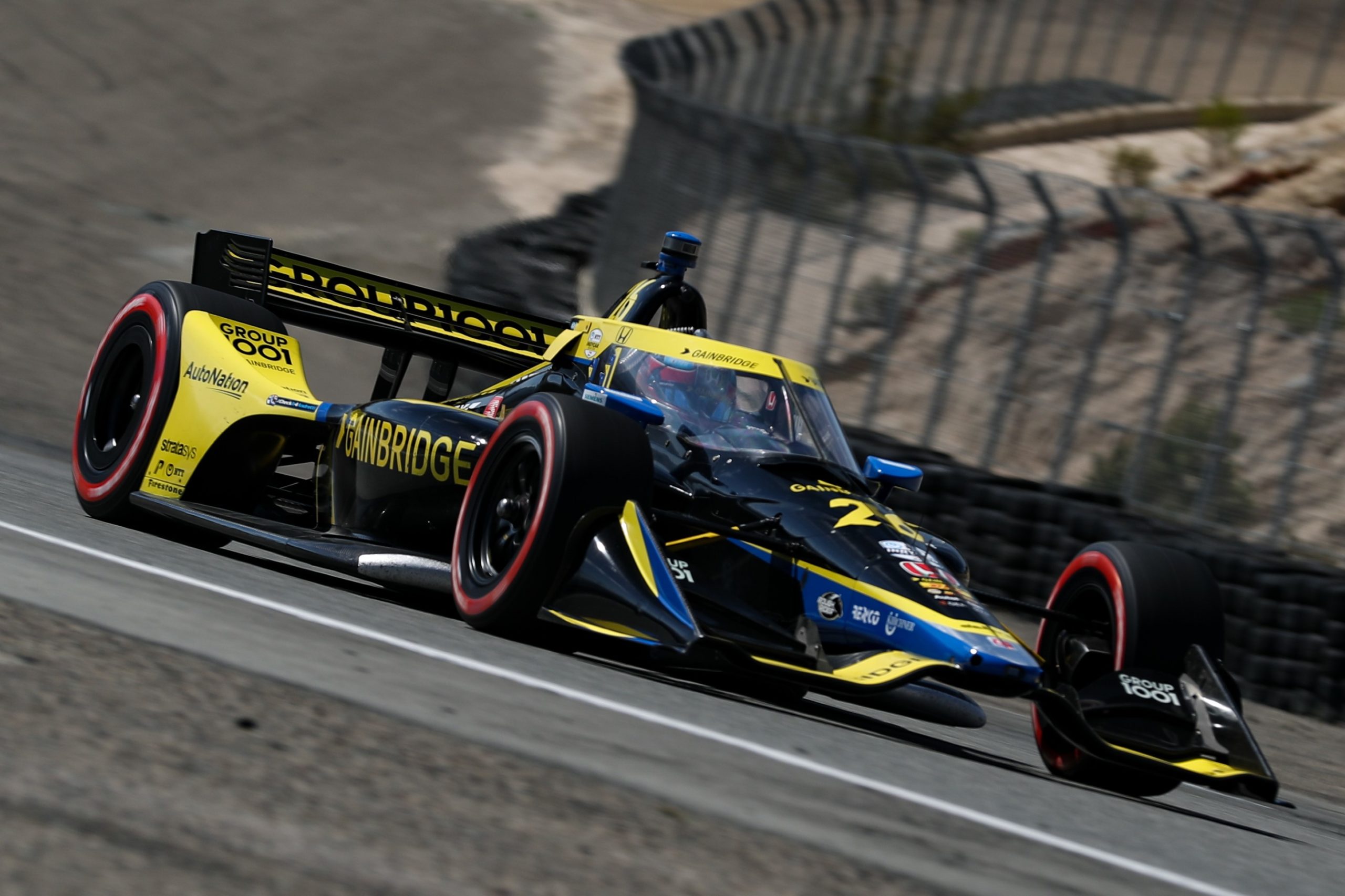 Colton Herta has edged ahead of his father Bryan Herta’s win tally in the IndyCar Series with victory in the Grand Prix of Monterey.

Josef Newgarden, who finished seventh, remains in contention for the title – albeit, 48 points in arrears.

Finishes of sixth for Marcus Ericsson and 13th for Scott Dixon saw the Chip Ganassi Racing duo eliminated from the title race.

For Herta, it marked successive wins at Laguna Seca after winning on the category’s return in 2019.

“I’m just happy to have done it,” said Herta.

“This place is so awesome. It’s my favourite track in North America by far and to win here means so much.”

At the start, Herta got the holeshot into Turn 1 despite a challenge from team-mate Alexander Rossi.

Further afield, McLaren SP driver Felix Rosenqvist spun on his own out of Turn 3.

Team Penske’s Scott McLaughlin made a stellar start, surging from 16th to 11th by the close of the first lap.

A mistake by Herta on Lap 2 saw him drop a wheel out of Turn 4 allowing Rossi to mount a challenge into Turn 5.

However, as they navigated the fast left-hander, Rossi got loose and made contact with Herta, sending Rossi into a spin.

With Rossi stalled, a brief yellow flag period interrupted proceedings, which would resume on Lap 5.

Drama struck on lap 10 for second placed Will Power who pitted with an engine issue, taking him out of contention.

Herta soon stretched his legs out to an eight-second advantage before Palou pitted on Lap 17.

Once the pit stop sequence cycled through, Herta’s advantage fell from eight seconds to three.

Herta and Palou found themselves out in clear air at the head of the field and established a sizable advantage at the front, third placed O’Ward some 25 seconds adrift.

Dixon’s day was hampered when Rahal Letterman Lanigan Racing’s Takuma Sato spun at the corkscrew, rolling back into the path of the six-time champion.

The pair duly made contact, though both managed to continue on. Sato would later retire from the race on Lap 83.

Come two-thirds of the way, it was still Herta who led Palou with O’Ward a distant third.

Palou made his final stop with 30 laps to go and was soon followed in by Herta.

The final stanza was an uneventful affair for the frontrunners. Herta came upon lapped traffic and had his four-second lead sliced to just half a second.

However, Palou showed no signs of mounting a challenge for the win.

Instead, it was Grosjean who ran long into the race and pitted late who would make the most headway.

He surged to third by the close of play, surviving an airborne moment at the Corkscrew as he and the lapped car of Jimmie Johnson made contact.

In the end, Herta crossed the line to claim a 1.9-second win over Palou. Grosjean’s late push saw him come home 3.7 seconds adrift of Herta for his third podium of the season.

Rahal was a solid fourth while O’Ward finished fifth, keeping himself in contention for the title.

McLaughlin put a pass on Dixon late in the piece to claim 12th while Power finished 26th and two laps down.

The 2021 IndyCar Series will come to a close on the streets of Long Beach next weekend.