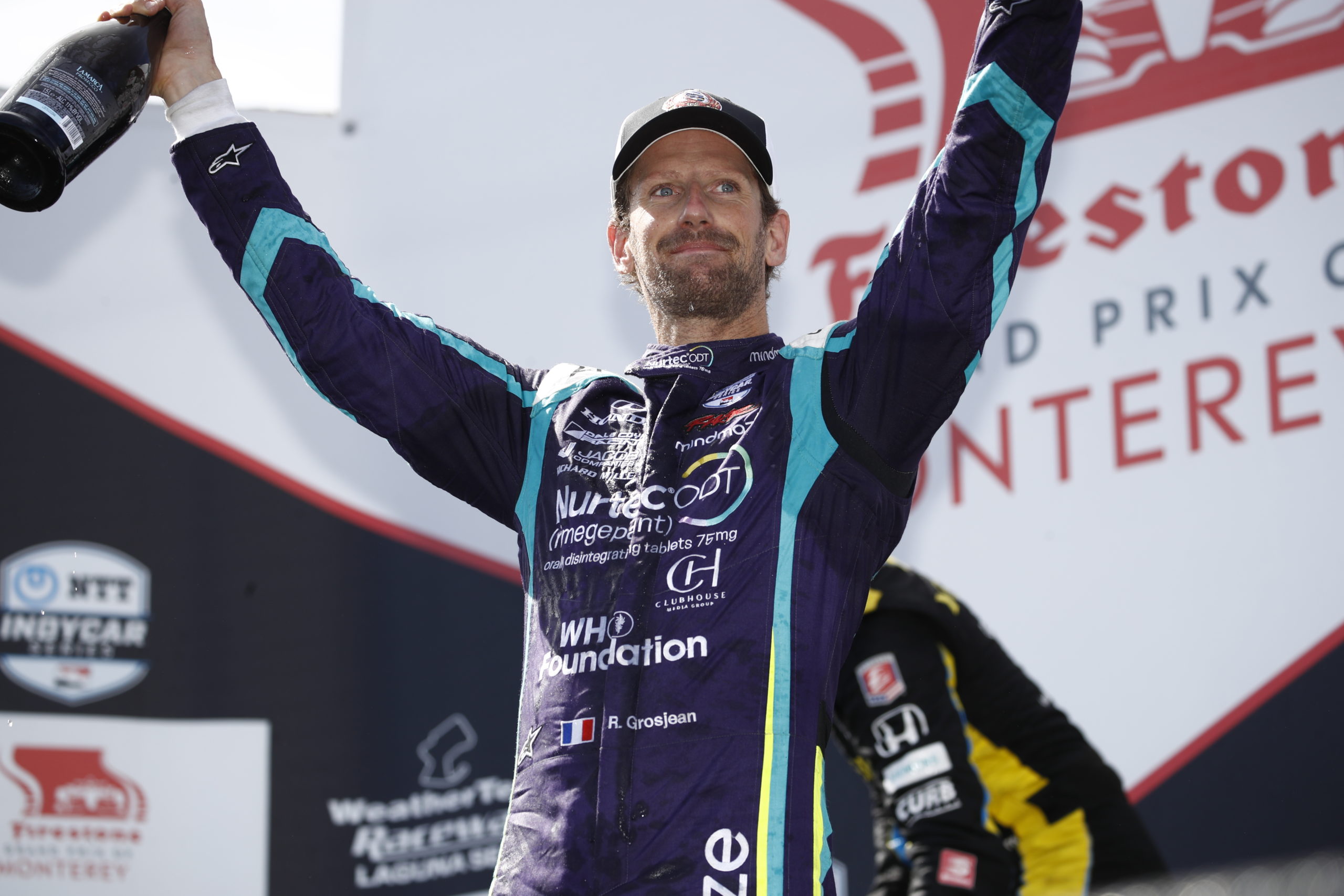 Romain Grosjean said he had to hold back tears after a standing ovation from fans following a storming drive to third at Laguna Seca.

Having not seen the podium in Formula 1 for five years, the Frenchman made the move state-side for IndyCar after his departure from Haas.

His maiden season in the North American single-seater series under the Dale Coyne Racing with Rick Ware Racing banner has already borne fruit with a podium in only his third race and two more since then.

In the two instances where he claimed second place finishes at the Indianapolis Motor Speedway road course he started first and third. However, at Laguna Seca he had to fight forward.

The 35-year-old pushed through from 13th, pitting late in the piece before scything through the field on soft compound tyres.

In the end, Grosjean whittled a nearly 30-second deficit to race leader Herta to just 3.7s, hauling his way from seventh to third in just over 20 laps.

After the chequered flag flew, the 35-year-old received a rousing reception from fans, prompting an emotional response.

“It’s just been incredible. As I say, I had a podium, when I got the ovation I almost cried, and I don’t cry very often. It’s been more than anything I could imagine.

“They are a very important part of what we do, but what they give me back is just incredible, so I wanted to share with them the podium.”

Grosjean said that while he was fortunate to be one of a select few to race in Formula 1, he said that feeling of being genuinely competitive on a regular basis is refreshing.

Last year Grosjean only claimed one points-paying top 10 finish in Formula 1. By comparison, he’s had six top 10 finishes in IndyCar, three of those being podium finishes.

“I had an incredible career. Yes, the last few years were a bit tough and frustrating. I knew I knew how to drive but I couldn’t show anything.

“Definitely coming somewhere where you can fight at the front, you have an engineer telling you, ‘You are the fastest car on track, you’re P1’, fighting for podiums, it’s definitely a revival.

“I understand a lot of kids want to make it to Formula 1. If it’s to be at the back of the grid every weekend, I think you’re better here.

“It’s the freedom of driving the car the way you like to drive it,” he added.

“You just go in the car, leave the pit lane, then you push every single lap. You play a bit with your bars. But as I said, you push, push, push, come in, pit, new tyres.

“The ability to enjoy every single lap that we do, enjoy the fact that you can be competitive in any team, makes it that with the atmosphere in the paddock, obviously with the support of the fans, been just the whole package that I’ve enjoyed a lot.”

Grosjean holds down 15th in the drivers’ standings with 266 points to his credit.